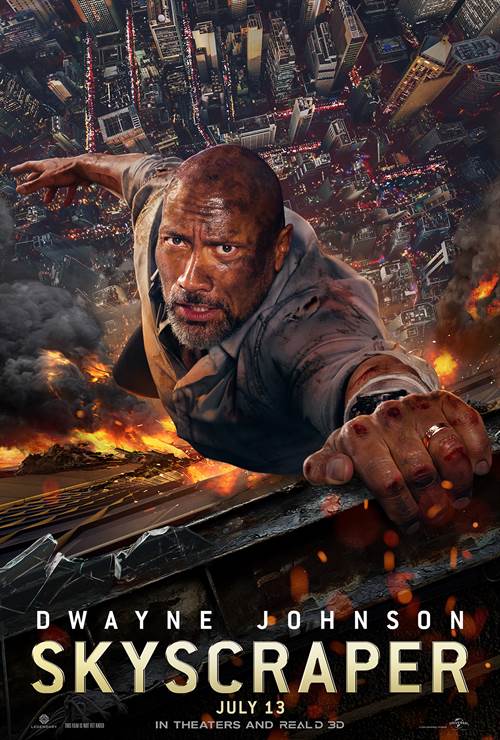 Global icon Dwayne Johnson leads the cast of Legendary’s Skyscraper as former FBI Hostage Rescue Team leader and U.S. war veteran Will Sawyer, who now assesses security for skyscrapers.  On assignment in China he finds the tallest, safest building in the world suddenly ablaze, and he’s been framed for it.  A wanted man on the run, Will must find those responsible, clear his name and somehow rescue his family who is trapped inside the building...above the fire line.

Download Skyscraper in Digital HD/4K from the iTunes store.


Enter For Your Chance To Win a Blu-ray Copy of Skyscraper Starri...  9/27/2018 2:55 PM EST
Dwayne "The Rock" Johnson (Jumanji: Welcome to the Jungle) is one of the biggest movie stars in the world today (both literally and figuratively) and this past summer he starred in yet another action movie called Skyscraper.  With the film getting ready to be released on Blu-ray this fall Universal Pictures along with FlickDirect wants to give one lucky winner the opportunity to win a Blu-ray comb...  More>>

Win Complimentary Passes For Two To An Advance Screening of Univ...  7/3/2018 11:09 AM EST
It is a simple fact that Dwayne Johnson is one of the highest-grossing movie stars around today.  Any film he is in is destined to become box office gold so it's not surprising that Universal Pictures tapped him to be the lead in their latest action adventure SKYSCRAPER.  As the film gets set to make its mid-summer debut Universal Pictures, in conjunction with FlickDirect, want to give some lucky ...  More>>

Dwayne Johnson Teams Up With Atom Tickets for Skyscraper "Ticket...  6/27/2018 10:48 AM EST
To commemorate his new film, Skyscraper, Dwayne Johnson has issued a challenge for his fans via Instagram.Johnson has teamed up with Atom Tickets for the "Ticket to More" challenge. The person that gets the most friends to buy tickets to watch the movie together on July 14 wins the challenge! The winner of the "Ticket to More" challenge will get their own free ticket to the Skyscraper movie, free ...  More>> 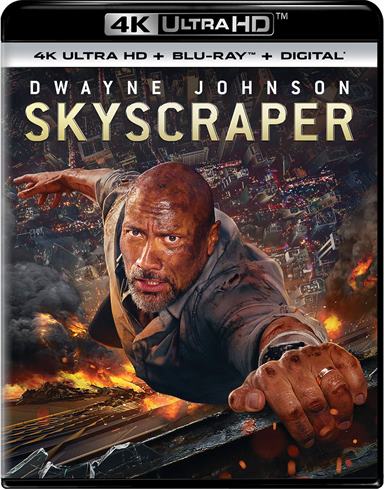 Dwayne Johnson (The Fate of The Furious) has certainly come a long way in his career. Not only has he proven himself to be good at comedy but also has also stuck with his biggest strength - action films. His larger than life persona makes him the perfect guy for these types of roles, and Skyscraper is no exception.

The film features Johnson as former FBI Hostage Rescue Team leader and U.S. war veteran Will Sawyer, who takes a job in Hong Kong assessing security for a high tech skyscraper, the largest in the world created by billionaire developer, Zhao Long Ji (Chin Han; Ghost In The Shell). For this job, Sawyer brings his wife (Neve Campbell; Scream) and children with him to live in an apartment in the building while he sees to his duties. He was recommended for this job by a friend of his, fellow ex-FBI agent Ben Gillespie (Pablo Schreiber; First Man) who he later finds out is in cahoots with an international terrorist Kores Botha (Roland Møller; Atomic Blonde ) to steal a tablet containing all the security information/access for the skyscraper. After a fire is started by Botha's team, Sawyer must now figure out how to get his wife Sarah and their children Georgia (McKenna Roberts; Timeless) and Henry (Noah Cottrell) out alive.

Johnson gives his usual good performance, working with the material he is given in this film. He has a likable personality and charm that makes him a rather good leading man. Neve Campbell is always a favorite, providing another believable and capable performance. While there aren't any other stand out performances, everything/everyone meshes well to round this film out nicely. Sure, there were a few scenes where you had to suspend disbelief, but that's the case in most action films and, in my opinion, adds to the fun of this genre. It is nice to see Campbell back in a semi-action role as this is probably the most stunt work she has done since the Scream series and she pulls it off like a pro.

Presented in its original  2.39.1 aspect ratio Skyscraper's 2160p lines of resolution encoded at HEVC and of course, HDR the picture is crystal clear. In the home theater format, there is no better option to get a pristine picture of Skyscraper. Colors leap off the screen and the details of the building are on full display in this 4K version. Complementing the video is a drop dead amazing candy fest for the ears supported by Dolby Atmos. The height and surround speakers make amazing use of their spatial properties to make it feel like a building is collapsing all around you while the dialog is crisp and easily heard throughout the chaos.

Special features for Skyscraper include:

While Skyscraper is not one of the best action films out there, it doesn't pretend to be either. If you can put your mind in park for two hours you might be pleasantly surprised on Dwayne Johnson take of The Towering Inferno meets Die Hard. This movie also demonstrates, that also not matter what in life, Duct Tape is your friend.