Academy Award® nominee Gary Oldman gives a "towering performance" (Richard Lawson, Vanity Fair) in acclaimed director Joe Wright's soaring drama Darkest Hour. As Hitler's forces storm across the European landscape and close in on the United Kingdom, Winston Churchill (Oldman) is elected the new Prime Minister. With his party questioning his every move, and King George VI (Ben Mendelsohn) skeptical of his new political leader, it is up to Churchill to lead his nation and protect them from the most dangerous threat ever seen. Also starring Academy Award® nominee Kristin Scott Thomas and Lily James, Darkest Hour is a powerful, inspirational drama.

Download Darkest Hour in Digital HD/4K from the iTunes store. 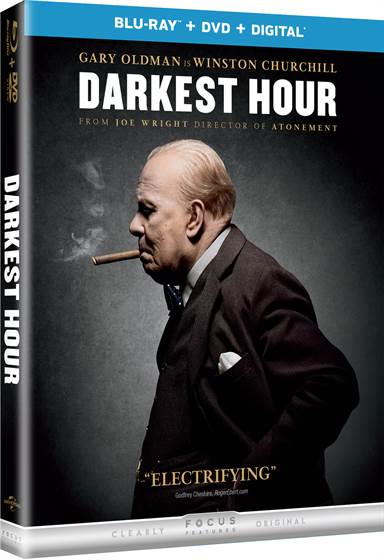 Winston Churchill was a magnificent orator.  He would move people to action simply with his words.  Many also consider him to be one of the greatest Brits of all time. He led England through Hitler and the volatile times of World War II.  He was also known for drinking too much and being more than a bit eccentric and he could be mean.  He became Prime Minister at one of the most difficult times in England's History and that is reflected in his legacy. Darkest Hour, coming to Blu-ray, DVD and digital download, is a film that chronicles the five weeks immediately following Churchill's appointment to Prime Minister.

In May of 1940, Neville Chamberlain (Ronald Pickup; The Best Exotic Marigold Hotel) stepped down as Prime Minister of the United Kingdom as Adolf Hitler and the Nazis steamrolled their way across Europe conquering country after country.  After much party debate, Winston Churchill (Gray Oldman; The Dark Knight) picked up the mantle and ran with it much to the consternation of parliament and King George VI (Ben Mendelsohn; Rogue One: A Star Wars Story).  He butted heads with most of his War Cabinet and made unpopular decisions that cost the United Kingdom thousands of young men's lives.

However, Churchill stubbornly opposed to peace talks with Hitler much to the dismay of high-ranking officials.  As the war weighed heavily on his mind, those around him secretly plotted to get him ousted from his position.  When all seemed lost and Churchill was actually considering peace talks, King George VI suddenly had a change of heart.  This encouraged Churchill to once again oppose his party and advisors.  In one of his greatest speeches to Parliament, he renewed faith in his plan and called upon the country to rise up and fight for their freedom.

Oldman is the consummate actor and this role showcases his abilities and versatility. He is exceptional as he embodies the spirit of the great orator and his delivery of those iconic speeches is masterful.  Many men have portrayed the Prime Minister in film and Oldman's version ranks amongst the best of them.  Kristen Scott Thomas (The English Patient) is very good as Clemmie and the two actors have a rapport on the screen that is difficult to fake.  Lily James (Pride and Prejudice and Zombies) as Churchill's secretary, Elizabeth Layton, hold her own against the veteran actor but he commands one's attention at all times and a lesser actress would have been swallowed up by his presence.

The 1080p video quality is sharp and clean though the surroundings are purposely made to seem dingy and dark.  The color palette is muted intentionally but the screen still has a clear picture despite the intended muddiness of the sets.  The Dolby Atmos audio is exceptional with dialogue relegated to the center channel and the effects sitting nicely in the surround sound speakers.  Oldman's delivery of Churchill's speeches is clear and concise and draws the audience in beautifully.

The Combo pack offers the Blu-ray disc, DVD disc, Digital HD code and 3 extras.  These include audio commentary with Director Joe Wright (Atonement), Into Darkest Hour and Gary Oldman: Becoming Churchill.  All three offer interesting tidbits and facts for the viewer to enjoy.

Darkest Hour offers a look into a very specific and limited time frame in Churchill's reign as Prime Minister.  The tumultuous issues would have given any politician cause for concern and pause but the movie depicts Churchill as a rather eccentric yet brilliant man who handled the situation with a definitive lack of diplomacy and calm.  The movie has some quiet moments that seem to break up the flow of the story, which unfortunately creates a lag.  However, Oldman's performance is not to be missed and will certainly be remembered as a highlight of his stellar career.