The 2160p high definition video quality of the 4K UHD is outstanding in this case. The bold hues of the colors, especially the blood splatter, are excellent and the black tones are deep and true. 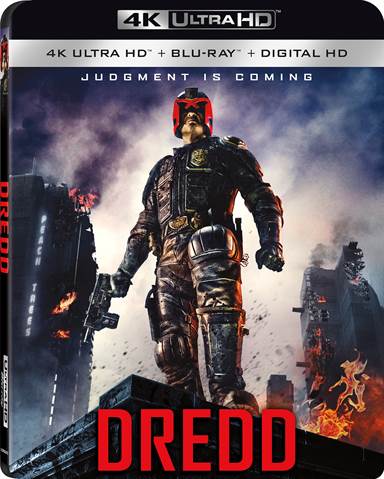 Purchase   DVD/Blu-ray/4K UHD
Judge Dredd made his debut in British comic books as early as the late 1970's as a law enforcement officer in Mega City One, a dystopian society set sometime in the future. His authority includes arresting, convicting, sentencing and, if necessary, executing criminals in an effort to keep the peace. Then in 1995 Sylvester Stallone (Rocky) brought him to the big screen with Armand Assante (Private Benjamin) as his nemesis to mixed reviews. Fans of the original felt the character and story weren't true to the original comic book and that was the end of it, until now. Reimagined in 2012, Dredd once again hit movie theaters, this time leaning more closely to the comic book story.

Judge Dredd (Karl Urban; Star Trek Beyond) is one of those law enforcement officers with a reputation for being ruthless, yet very good, so it is no surprise when he is assigned a probationary rookie, Anderson (Olivia Thirlby; Juno), with a "special gift". Needless to say, he is less than thrilled to have this "newbie" tagging along but seems impressed by her psychic abilities.

When reports of multiple homicides at Peach Trees - one of the most violent Blocks in the City complex – are called in, Dredd and Anderson got to check it out and apprehend a suspect. However, before they can leave the building with the perpetrator Ma-Ma (Lean Headey; Game of Thrones), the head of the most dangerous gang in Block One, has the building locked down and the Law Enforcement agents suddenly find themselves hunted by numerous groups of criminals. Trapped, and without communication to headquarters, they must outsmart Ma-Ma and her henchman to survive.

Dredd, unlike its 1995 counterpart, tends to stay truer to the comic book version of the story. Dredd is mean and calculating and none too helpful to his rookie partner as they wind their way through a 200 story apartment complex encountering life or death threats around every corner. This version is extremely bloody, violent and fairly graphic to appease fans of the comic book who felt the original movie was too tame.

Urban does a great job as Dredd using mostly tonal inflection to convey his thoughts and emotions as his face is covered by a mask for the entire filmmaking facial expressions all but useless. While his character is meant to be stoic for the most part, he manages to offer the occasional joke. Thirlby blends a combination of fear, determination and pure grit that makes her holistically human to the audience. Headey is simply unaffected and bad ass as the antagonist in this scenario. She is callous and unapologetic, which is necessary to portray the harshness of the cruel environment in which she chooses to live.

The 2160p high definition video quality of the 4K UHD is outstanding in this case. The bold hues of the colors, especially the blood splatter, are excellent and the black tones are deep and true. The Dolby Atmos audio is exceptional as well with the dialogue clear in the center channels and the effects surrounding you from all angles. Every explosion shakes the ground giving the viewer a fully immersive experience.

The combo pack offers the film in 4K, 3D, and 2D as well as a digital copy. The extras can be found on both discs and include Mega-City Masters: 35 years of Judge Dredd, the 3rd Dimension, Days of Chaos: The Visual Effects of Dredd 3D, Dredd feature, Welcome to Peach Trees, Dredd's Gear, and Dredd Motion Comic Prequel. While some of the extras are more informative than others, all of them give some insight into the comic book series and the character.

Fans of action films will certainly get an adrenaline rush from Dredd and, obviously, fans of the original comic book series will be appeased with this new version. With lots of violence and blood, this movie is not for the weak of heart though.

Download Dredd in Digital HD/4K from the iTunes store.

For more information about Dredd visit the FlickDirect Movie Database.