Home / Reviews / The Kid Who Would Be King

The kids are great; especially Serkis, Stewart and Imrie add some fun to The Kid Who Would Be King 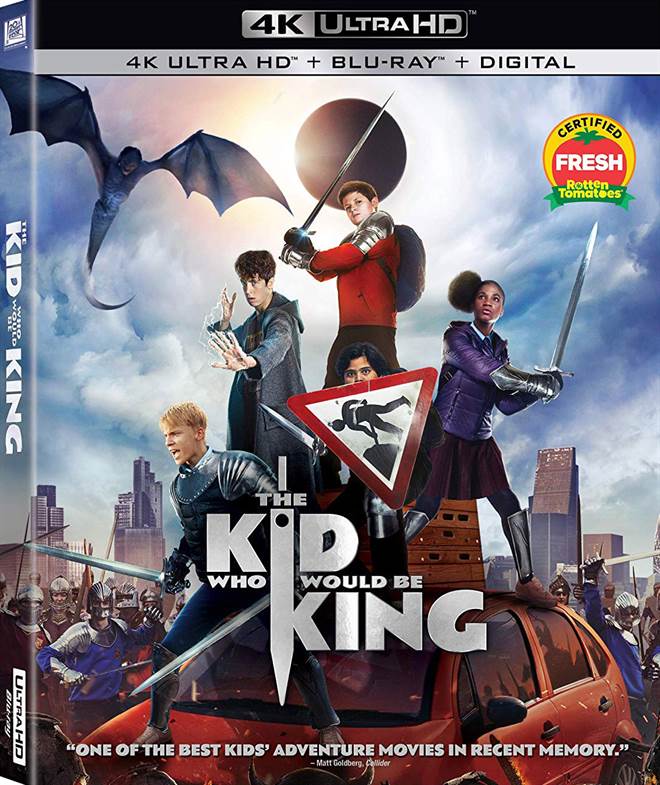 Purchase   DVD/Blu-ray/4K UHD
The legend of King Arthur and Excalibur has been around for ages.  The story of the sword in the stone that can only be removed by the rightful heir has been told time and again.  There are books written, movies made and television shows that tell the tale of the boy that freed the sword, became king and along with his most trusted advisors – the Knights of the Round Table  - maintained peace in his Kingdom.  The latest retelling of this saga came earlier this year courtesy of Twentieth Century Fox with a movie called The Kid Who Would Be King.   Now you can buy the film on 4k, Blu-ray, DVD, and Digital HD.

Alex (Louis Ashbourne Serkis; Mowgli: Legend of the Jungle) is a typical twelve-year-old middle student.  His best friend is Bedders (Dean Chaumoo) and together Lance (Tom Taylor; The Dark Tower) and Kaye (Rhianna Dorris; Secret Life of Boys) bully them endlessly. One day while running away from Lance and Kaye, Alex stumbles across a sword in a stone and takes it not knowing that it is the famed sword Excalibur and that he is the heir to the throne. Suddenly stranger things begin to happen including the appearance of a new student named Mertin who it turns out is really the wizard Merlin (Angus Imrie; Kingdom/Patrick Stewart; X-Men).

Merlin tells Alex he is the chosen one and that Morgana (Rebecca Ferguson; The Greatest Showman), Arthur's half-sister, is going to rise from her underground prison and destroy the country.  Alex then knights Bedder, Lance, and Kaye and together they go on a quest in search of his father.  What they find when they get to their destination are lies that threaten to ruin everything until they discover their "inner strength" and believe that they can defeat Morgana and save England.

The cast, while young, seem like seasoned actors who play their parts well.  Serkis is great and Chaumoo reminds me of Chunk from The Goonies – hyperkinetic but funny in a weird sort of way.  Taylor and Dorris hold their own but the focus is definitely drawn to Serkis and Chaumoo.  Imrie and Stewart are brilliant as the young and old Merlin respectively and it is wonderful to see Stewart taking on a more comedic role than we have seen from him in much of his past work.  Ferguson does evil well and I would like to see her portray more of these types of characters in the future as I believe she will bring some real bite to a project.

While the picture quality is very sharp on the 4k version of this release the 2160p video quality can be a hindrance at times.  The colors are clean and details are sharp but the graphics are easy to spot and you are definitely aware when the actors are standing in front of a green screen with CGI generated backgrounds.  This is most evident when they are riding horses through the forest while being chased by demons.  The Dolby Atmos audio is pretty strong though with little artifacting.  The extras are housed on the Blu-ray disc and include Deleted Scenes, Origins of a King, Young Knights, Knight School, The Two Merlins, Meet Morgana, Movie Magic, Hair, Makeup & Costume Tests, and Promotional Materials.

This new version of the classic tale gives it a modern twist with unlikely heroes and a more humorous tone than we have probably seen in the past.  The kids are great; especially Serkis, and Stewart and Imrie add some fun to the film.   For younger audiences, this is a wonderful way to introduce them to the story of King Arthur and Excalibur.

For more information about The Kid Who Would Be King visit the FlickDirect Movie Database. This release has been provided to FlickDirect for review purposes. For more reviews by Allison Rose please click here.

The Kid Who Would Be King images are © 20th Century Fox. All Rights Reserved.

Alyn Darnay
It’s been quite a while since I saw a film made for a younger audience that I’ve enjoyed as much as this. Don’t just send your kids to see it, take them! You’ll enjoy it.
Full Review | Grade: B