Home / Reviews / The Kid Who Would Be King

It’s been quite a while since I saw a film made for a younger audience that I’ve enjoyed as much as this. Don’t just send your kids to see it, take them! You’ll enjoy it. 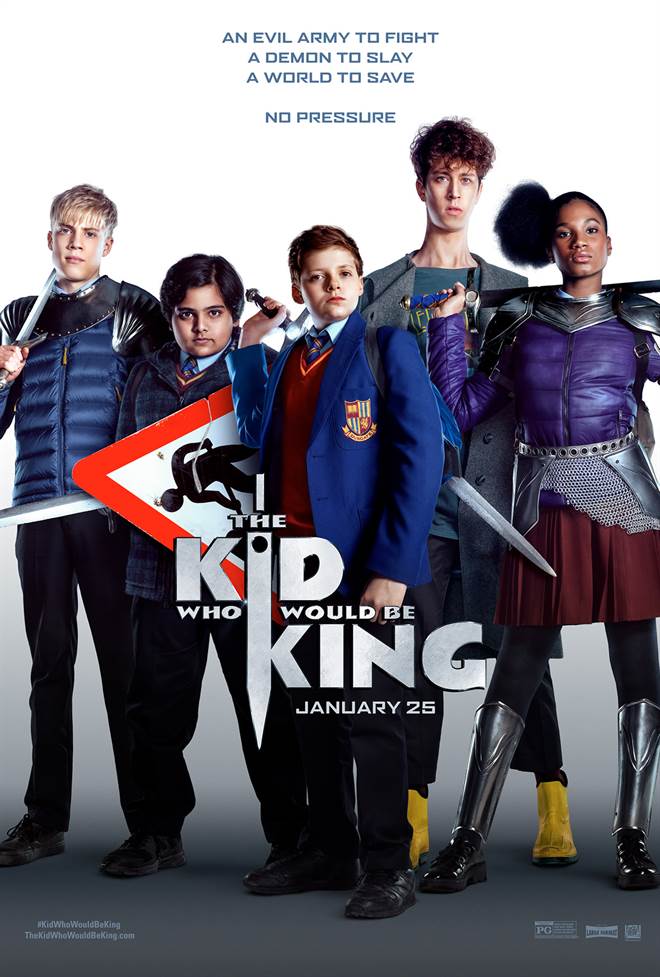 That's the way all fairytales, old and new, usually begins, so I thought I'd start my review by honoring this modern take on one of them in the same way. "The Kid Who Would Be King" is quite simply a wonderfully bright new take on the Arthurian legend. Part "Goonies" style action adventure, part allegory, and pure magic, it is a rousing, modern re-interpretation filled with young chivalrous knights, dangerous flaming demons, a wicked enchantress, swashbuckling sword fights, big budget effects, and downright clever humor. It's sure to claim the young audience it seeks.

Director Joe Cornish, who last gave us the terrific Teens Battle Aliens sci-fi film "Attack The Block", which starred a young John Boyega, delivers another stylish film that melds his trademark rebellious nature to our seemingly messed up current political climate while still being true to the legend.

With most features aimed at children these days being either animated fluff or superhero nonsense, it's refreshing to see a true attempt to entertain while directly reaching young minds with themes of the things they should be dreaming about becoming in the real world. "The Kid Who Would Be King" is that type of film. Oh, and I should mention, it's bunches of fun for the whole family.

One day at school, 12-year-old Alex (Serkis) sticks up for his helpless best friend Bedders (Chaumoo) making himself the target of two older school bullies, Lance (Taylor) and Kaye (Dorris). Later that day, while escaping from them he falls into a construction site where he stumbles upon Excalibur, the mythical Sword in the Stone. Pulling the sword from the stone he unknowingly sets into motion an ancient spell cast by the imprisoned evil sorceress Morgana Le Fay (Ferguson).

With a wild clicking of his fingers, a youthful Merlin (Imrie), appears at school disguised as a student and attempts to convince Alex that he is both special and in great danger. Through story and magic, Merlin related to Alex that he has been chosen to take up a quest to destroy Morgana and her army of fantastical creatures before they take over the world. Creating a new round table and winning the support of his enemies, Alex and his new "knights" set forth to battle the coming evil.

There are some really wonderful performances by young actors in the film, and again Cornish has succeeded in discovering another talent with a long career ahead of him. Angus Imrie the 24-year-old actor playing the young Merlin incarnation literally steals the film with his wild, ditsy dizzying clicking movements and vocal styling.  I also need to quickly mention Patrick Stewart whose older incarnation as Merlin as a garrulous old man is just a stitch.

My take… It's been quite a while since I saw a film made for a younger audience that I've enjoyed as much as this. Don't just send your kids to see it, take them! You'll enjoy it.

Rating: 4 1/2 Stars (out of 5)
"The Kid Who Would Be King" is Rated PG for fantasy action violence, scary images, thematic elements including some bullying, and language.

For more information about The Kid Who Would Be King visit the FlickDirect Movie Database. This release has been provided to FlickDirect for review purposes. For more reviews by Alyn Darnay please click here.

The Kid Who Would Be King images are © 20th Century Fox. All Rights Reserved.

Allison Rose
The kids are great; especially Serkis, Stewart and Imrie add some fun to The Kid Who Would Be King
Full Review | Grade: B