Ad Astra is one of Pitt’s best performances to date as he compartmentalizes Roy’s feelings in order to play the part of the dutiful, calm, clear-headed soldier. 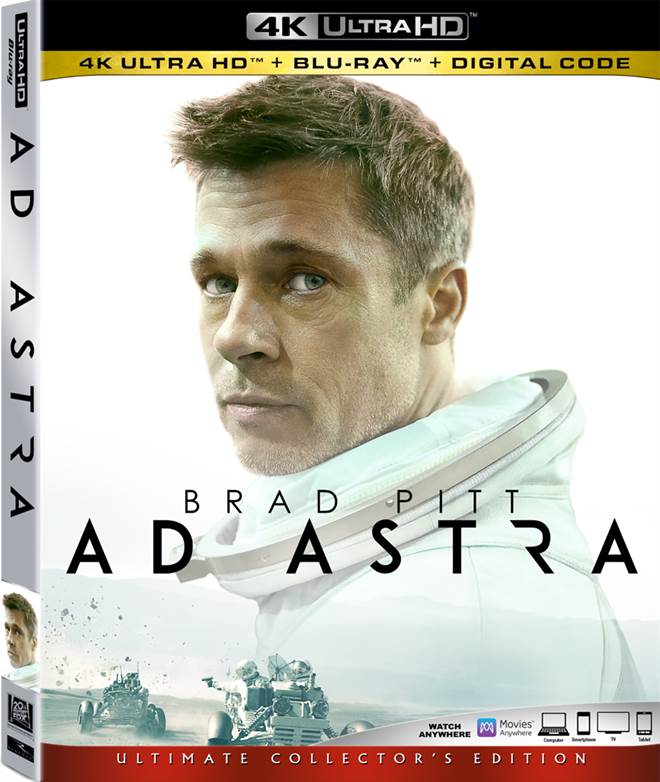 As humans, we seem to be fascinated by space exploration. Even early civilizations looked to the stars for guidance and answers.  Sailors used the stars as maps to help them on their journeys.  In the 1960s countries vied for first place in the "space race".  There are numerous television shows and movies that reference space, aliens, astronauts, etc. as we imagine what it is really like among the stars.  Few have been there and none have gone further than Earth's moon (and if you believe the conspiracy theories nobody has really ever landed on the moon).  In yet another attempt to try and dramatize the darkness above us, co-writer/director James Gray (The Lost City of Z) offers his take with the film, Ad Astra.

Roy McBride (Brad Pitt; One Upon A Time In Hollywood) has large shoes to fill.  His father, H. Clifford McBride (Tommy Lee Jones; The Fugitive) was widely regarded as one of the greatest astronauts that ever lived.  Many years ago H. Clifford led a team to Neptune – further than anyone had ever been – to conduct experiments for the Lima Project.  After many years, contact with the team had been cut off and they were all believed to be dead, including McBride.

Suddenly, mysterious power surges emanating from outer space are hitting Mars, the Moon, and Earth.  When scientists determine the surges are coming from the Lima Project, the enlist Major Roy McBride to reach out to his father who they believe is still alive.  When they decide his services are no longer needed, they choose to send him home -though he decides not to leave.  Instead, he stows away on the spacecraft being sent to destroy the Lima Project.  Once there he finds his father and completes his task.  However, his father begs Roy to untether them and Roy watched as he floats further into space.  The once stoic, unfeeling Roy then returns to Earth to form bonds and relationships with the people in his life.

This film is one of Pitt's best performances to date as he compartmentalizes Roy's feelings in order to play the part of the dutiful, calm, clear-headed soldier.  Jones is haunting as a scientist who sees his dream die and goes a little bit crazy in the process.  Unfortunately, the two actors don't have an easy chemistry but I suppose that is an accurate reflection of a son and father who hadn't seen each other for almost 30 years.

The 2160p video resolution is wonderful and accentuates the visual images Gray chose to capture.  The black of deep space has shadings throughout giving them a multi-layered feel. The Dolby Atmos audio is superb which enhances the viewer's enjoyment.  As rocket boosters ignite, you can almost feel the shaking you know those in the ship would experience.  The combo pack has the 4K disc,  Blu-ray disc, Digital HD code, and the following extras: Deleted Scenes, To the Stars,  A Man Named Roy The Crew of the Cepheus, The Art of Ad Astra, Reach for the Stars and Audio Commentary.

Ad Astra is more about human relationships and the father/son dynamic than it is about outer space.  It is a thinking man's movie and doesn't really rely on action sequences though there are a few good ones in the film.  The visuals make the movie enjoyable and interesting but the ending seems anticlimactic and left me with more questions than answers.

This drama subtly gets its message across without shoving it down anyone's throat.  However, it also doesn't appeal to mass audiences as it will require one to hone in and focus on the story more than the action.

For more information about Ad Astra visit the FlickDirect Movie Database. This release has been provided to FlickDirect for review purposes. For more reviews by Allison Rose please click here.

Alyn Darnay
Ad Astra's style with a lot of in-your-face close-ups, grainy texture, and sumptuous vistas is a lot different than any Space Opera we’ve seen to date and that alone makes it stand out.
Full Review | Grade: C