During Cinemacon 2021, Jason Reitman described Ghostbusters: Afterlife as a love letter to his dad and his daughter, connecting the generations. I for one, certainly agree with him. 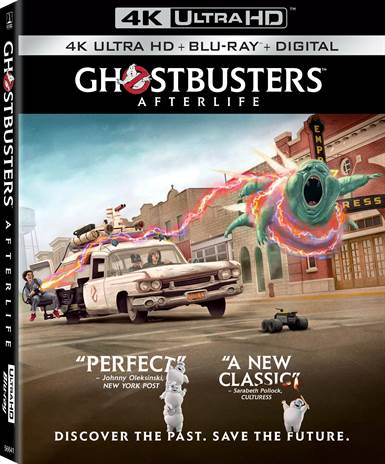 Back in 1984, a small movie came out starring Bill Murray, Dan Aykroyd, Harold Ramis, Ernie Hudson, Rick Moranis, and Sigourney Weaver entitled Ghostbusters. Ever since then the world has not been the same. The film spawned enough merchandise to almost rival Star Wars toys at the time as well as a hit song, cartoon series, a sequel, and a reboot. Then, last year, we were treated to a requel entitled Ghostbusters: Afterlife. This month the latest film hits stores on 4K UHD, Blu-ray, and DVD.

The idea for Ghostbusters was based on Dan Aykroyd's (Grosse Pointe Blank) fascination with the supernatural. Originally conceived as a buddy movie with John Belushi (Animal House), it had to be reworked after Belushi's untimely death.  Harold Ramis (Stripes) was brought in to make the movie more financially sound and more grounded in reality. On June 8th, 1984 Ghostbusters was unleashed onto the world, creating a new genre that mixed horror, comedy, and science fiction.

While the first film ended up becoming the most successful comedy of the 80s, in 1989, Ghostbusters II was then released and while audience members enjoyed seeing the team busting ghosts again, critics weren't as pleased (including myself). For years after that, there was a script floating around Hollywood that  Dan Aykroyd wrote for a third sequel. However failing to get it greenlit, a reboot was released in 2016 simply entitled, Ghostbusters, starring Melissa McCarthy, Kristen Wiig, and Chris Hemsworth. While the reboot wasn't a complete flop (it really should have been), a sequel was never approved because of mediocre box office grosses for the reboot.

The film focuses on the family of Egon Spengler (Harold Ramis). His daughter, who is a single mother looking after her children, suddenly finds themselves homeless. Adding to the horrible week Callie (Carrie Coon; Gone Girl) is having, she is told her estranged father had passed.  With nothing to lose (they were getting evicted from their apartment), she and her kids (Finn Wolfhard; Stranger Things) and Phoebe (McKenna Grace; Gifted) head to Summerville, Oklahoma, and take up residence in his old house. However, Phoebe, who is not your average child, unlocks the secrets of her grandfather's residence and his previous life.

While this film had critics divided, it scored very well with audiences.  However, one thing both of those groups, including myself, can agree with is that McKenna Grace is the heart and soul of this film. She is simply amazing. Her deadpan humor makes you laugh even on repeat views.

The first hour is dedicated mostly to establishing the characters of the town as well as the Spenglers without much action. However, the film is still extremely enjoyable as Phoebe, her friend Podcast (Logan Kim), and their teacher Mr. Grooberson (Paul Rudd) track down the mystery that is Phoebe's grandfather.

Once the film's action starts, it doesn't let up. From gunner seats on Ecto-1 to a "save the world" plot, Ghostbusters: After delivers on every level one could dream of for a sequel to one of the most beloved films in today's pop culture.

Ghostbusters: Afterlife is presented in a 2.40 aspect ratio, which is only slightly larger than its original aspect ratio of  2.39. The 4K disc, with Dolby Vision, adds more texture and whites and blacks to the picture.  However, it isn't that much of an upgrade over the Blu-ray also included in the combo package. Conversely, the Dolby Atmos soundtrack is pretty amazing. It adds clarity and depth to the film and makes you feel like you are actually in the small town of Summerville.

Because Sony wanted to spare no expense and make sure the 4K disc had the best audio and video quality possible, the extras are relegated to the Blu-ray Disc in the set (as well as the digital copy). While most of the extras feel like very short electronic press kits, Summoning the Spirit: Making Ghostbusters: Afterlife in which director Jason Reitman goes through the production of the film, stands out in the pack. Other extra's include: The Gearhead's Guide to Ghostbusters Gadgets, Special Effects: The Ghosts of Afterlife, Bringing Ecto-1 Back to Life, We Got One! Easter Eggs Revealed, Ghostbusters: A Look Back, A Look Ahead, and deleted scenes.

When I originally saw this film during Cinemacon 2021, Jason Reitman described Ghostbusters: Afterlife as a love letter to his dad and his daughter, connecting the generations. I for one, certainly agree with him.

Download Ghostbusters: Afterlife in Digital HD/4K from the iTunes store.

For more information about Ghostbusters: Afterlife visit the FlickDirect Movie Database. This release has been provided to FlickDirect for review purposes. For more reviews by Nathan M Rose please click here.