For Ford, portraying Indiana Jones offered some similarities to his role as Hans Solo while one major glaring difference was the addition of formal schooling. 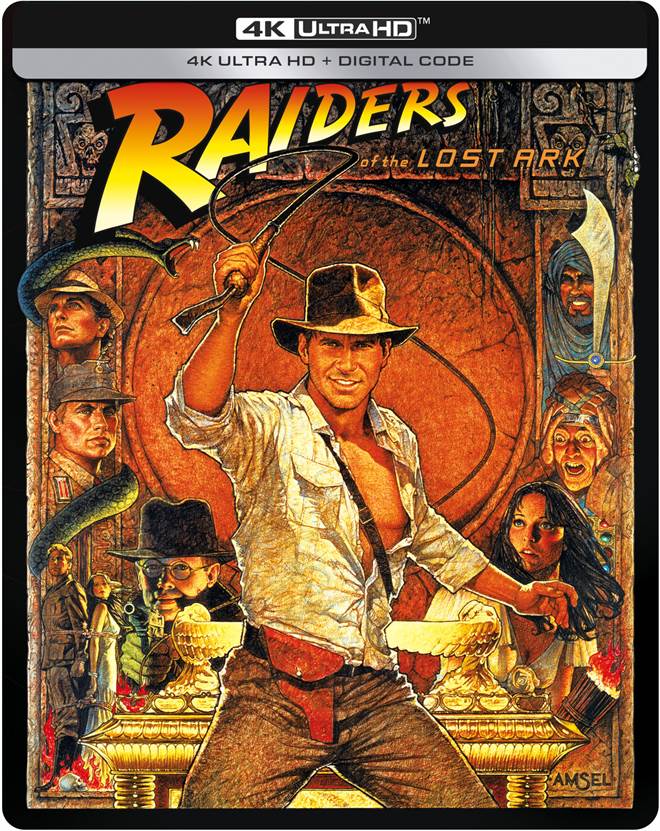 It isn't very often an actor has the opportunity to be a part of a movie franchise that was spread out over forty- two years.  It is even rarer when an actor has two movie franchises that span over forty years.  However, actor Harrison Ford has managed to do just that with his portrayal of Han Solo in the Star Wars films and as Dr. Henry Walton "Indiana" Jones, Jr. (Indy for short) in the Indiana Jones films.  The first of the Jones series,  Indiana Jones and the Raiders of the Lost Ark, has become a "new classic" and thankfully Paramount Pictures Home Entertainment and Lucasfilm Ltd. have decided to release a limited edition 4K Steelbook for purchase just in time for Father's Day.

In 1936 the world was on the precipice of the Second World War and the Nazis, under Adolf Hitler, were looking for ways to dominate other countries.  When the US government learns the Nazis are excavating Tanis, the ancient city near Cairo, they hire archeologist Indiana Jones to find the "Lost Ark" before the Nazis. Hitler, believing the Ark's power could make his troops invincible, sent some of his military to capture experts, including Indy, to help locate the artifact.  However, once discovered the ark, once opened, destroys those who look upon its contents, effectively ending Hitler's plan.

For Ford, portraying Indiana Jones offered some similarities to his role as Hans Solo while one major glaring difference was the addition of formal schooling.  While Solo always managed to get by on his street smarts and cocky attitude, Jones is a College Professor with a Ph.D. and plenty of confidence. Both men, however, have a certain amount of insecurity which makes them slightly more charming. Of course, they also share that disarming smile and a rugged handsomeness that serves each character well.

When the Indiana Jones four-movie set was released a year ago, it was presented in 4K with a 2160p resolution and in Dolby Vision.  This year Paramount is simply releasing each of the four films in the set individually in a limited edition Steel Book.  The video quality is the same and last year, when I reviewed the five-disc set, I gave high praise as to how good the movie looked and that fact hasn't changed.  The same can be said for the Dolby Atmos audio presentation.  The original tracks are all still there but the ambient sounds have been enhanced to bring fuller depth to each scene.  Of course, the iconic original score written by the incredibly talented maestro, John Williams, benefits from the upgraded audio. The enhancements make it even easier to appreciate the intricate sequence of notes used to make up the score.

The most disappointing part of this Steel Book is the extras, or should I say the lack thereof.  Besides the detailed Steel Book outer case, the package includes a digital code and an exclusive mini-poster.  The only other extras are the three trailers - teaser, theatrical, and reissue. If you want more, I suggest getting your hands on the 4 movie set, even though those extras are all previously released.

The Indiana Jones movies are action/adventure with some intelligent and witty dialogue thrown into the mix and Raiders started the franchise off extremely well.  The Steelbook with the enclosed mini-poster makes a nice addition to any 4K collection, especially if you don't want to splurge and purchase the four-movie set from 2021.

With Father's Day quickly approaching, this would make a terrific last-minute gift idea for those who love movies, action/adventure films, Harrison Ford, and/or the Indiana Jones series.

For more information about Raiders of the Lost Ark visit the FlickDirect Movie Database. This release has been provided to FlickDirect for review purposes. For more reviews by Allison Rose please click here.

Allison Rose
With upgraded technology, older films can be hit or miss. This combo pack is presented in Dolby Vision video and Dolby Atmos Audio, which makes the set worth purchasing.
Full Review | Grade: A