Coraline is a stop-motion masterpiece. 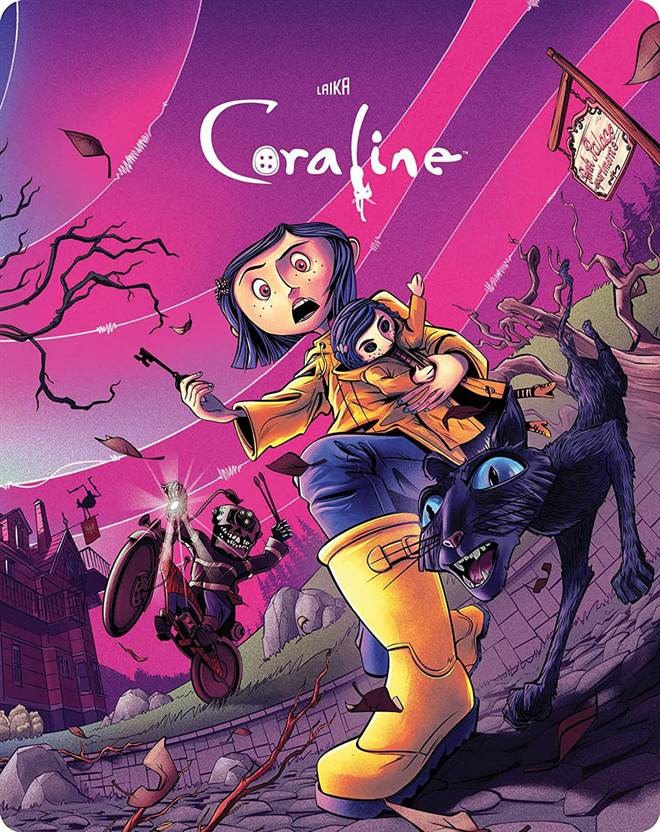 Founded in 2005, Laika Studios has become one of the top companies in stop-motion animation.  Since their first feature film, Coraline, debuted in 2009, every Laika feature film has been nominated for at least one Academy Award, which is impressive on its own.  Their reputation for quality is well known and there seems to always be a demand for their films.

Shout Factory! has become known for creating quality rereleases, worthy of the original films. Imagine what happened when Shout Factory! and Laika Studios teamed up to release the first four films of the Laika catalog. Beginning with Coraline, presented in 4K and wrapped in a beautiful steelbook, Laika and Shout Factory! are obviously off to a great start.

Coraline Jones (Dakota Fanning; Push) has moved with her workaholic parents, Melanie (Teri Hatcher; Desperate Housewives), and Charlie (John Hodgman; Baby Mama), from Michigan to Oregon. They live in the pink palace apartments which are pretty old and run down.  However, when Coralline explores the space she finds a hidden door, which at night becomes a pathway to another, almost identical, world.  There she meets her "other mother" (Hatcher) who makes her world seem perfect. Of course, as the old saying goes, be careful what you wish for.

The cast is excellent that brings the characters to life.  Fanning plays Coraline as a moody, snarky girl who was moved from everyone and everything she knew to be continually ignored by her parents.  Hatcher and Hodgman do double duty portraying Coraline's parents and the "other" parents.  Their ability to play these opposing individuals is a testament to their talent.  The rest of the vocal talent is great and they complement the leads well.  Together they paint a picture to go along with the visuals.

The 2160p video resolution with Dolby Vision HDR is outstanding.  Laika is known for utilizing a wide range of colors from vibrant yellows and pinks to more subdued grey and black tones.  The 4K transfer offers depth and richness to the full spectrum.  It also highlights all the little details of each "being" in the film whether it be a human, an insect, or something else.  Stop-motion animation is painstakingly tedious and precise and, what should have been fake looking ended up incredibly beautiful,

The Dolby Atmos audio is also an improvement from the 5.1 Master Audio track on the previous release.  The dialog is loud and clear and ambient noise comes from all the speakers surrounding the viewer consistently.  Besides the steelbook and a new booklet, all the extras are previously released material and are housed on the Blu-ray Disc.  They include: Audio Commentary with Henry Selick and composer Bruno Coulais, Inside Laika - Discovering the Characters of Coraline, Inside Laika - Revisiting The Puppets With Laika's Animation Team (The Beldam, Mr. Bobinsky, The Cat, Coraline Jones, Other Father, Other Mother, and Wybie Lovat), Feature-Length Storyboards, The Making of Coraline, Creepy Coraline, Voicing The Characters, Deleted Scenes, Still Galleries, and the Trailer.

Coraline is a stop-motion masterpiece that has led to other, almost as incredible, movies.  The story is on the darker side, making it more of a tween product as opposed to a lighthearted, "sing-songy", appropriate for four and five-year-olds type of film.

Laika creates and produces interesting content delivered in an intricate and detailed manner that can be enjoyed by middle school-aged children through adulthood.  Shout Factory! did an amazing job with the transfer and the packaging.  Together these two giants in their respective industries make a perfect team and the Coraline 4K steelbook is merely one example of this partnership.

Absolutely worth the money.

For more information about Coraline visit the FlickDirect Movie Database. This release has been provided to FlickDirect for review purposes. For more reviews by Allison Rose please click here.