If it sounds like I am gushing over Push, it is because I surely am.  This film is not one to just dismiss, and if you are an action/science fiction junkie like I am, this is a "must see". 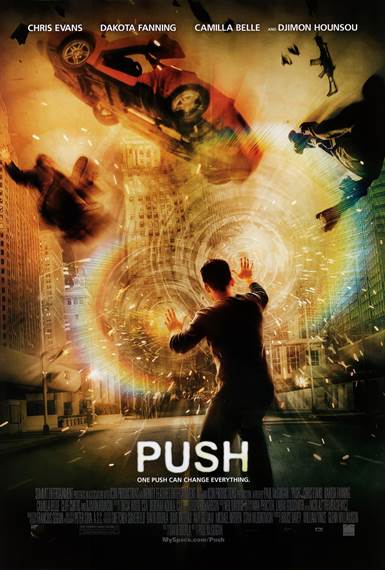 Purchase   DVD/Blu-ray/4K UHD
For the past couple of decades, mutants have been the subject of great films and comic books.  Starting earlier this decade, the "Push" started to create a real genre out of this type of anti-hero -- starting first with Bryan Singer's X-men Series and lately continued with NBC/Universal's television series, Heroes.

Enter Push, a low budget film by Summit Entertainment, starring Dakota Fanning, Djimon Hounsou, Chris Evans, and Camilla Belle.  This film, directed by Paul McGuigan, burrows deep into the deadly world of psychic espionage where artificially enhanced paranormal operatives have the ability to move objects with their minds, see the future, create new realities and kill without ever touching their victims.  Against this setting, a young man and a teenage girl take on a clandestine agency in a race against time that will determine the future of civilization.

Ever since the first "Push" trailer debuted in the fall of 2008, this film has been called a "hack" --  nothing more than a "Heroes clone".   After seeing this movie, I can now set the record straight, Push is absolutely one of the best films so far this year.

From the onset, Push delivers the action and does not let up, however, the real stars of the film are its actors and director, Paul McGuigan.

Just like Doug Liman and Paul Greengrass, Paul McGuigan took something that could have easily been another boring slick, Hollywood action film and added an "independent film" feel to it.  The result is absolutely amazing, giving you just the right amount of action and story without going "over the top"

The cast itself also really sells "Push".  From the always amazing Dakota Fanning to the great performance by the usually one-dimensional Chris Evans, Paul McGuigan gets the best performances out of every actor, and it shows on every inch of film. (On a personal note, it was great to see Neil Jackson (Blade the Series) finally get some time on the big screen like he deserves.)

If it sounds like I am gushing over Push, it is because I surely am.  This film is not one to just dismiss, and if you are an action/science fiction junkie like I am, this is a "must see".   I can only hope this does well with the average viewer as it did for me, and a sequel to Push hits the screen in the next couple of years.