It is obvious why Johnson was cast in the title role. He is a HUGE box office draw, can portray an extremely menacing character, and would be believable as an ancient superhero. 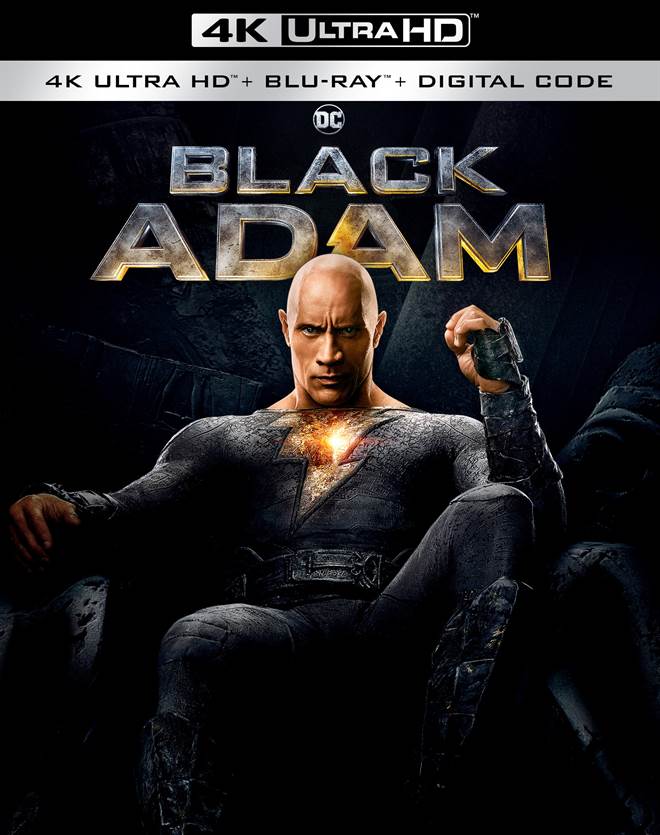 I can't take anymore.  I'm raising the white flag and surrendering.  I have had enough comic book movies.  A dozen years ago when Marvel Studios brought Iron Man to the big screen, I was excited and saw promise. Of course,  DC Comics had been churning out Batman films prior to the MCU but those were hit or miss.  In the last decade, it seems the competition between Marvel and DC theatrical releases has brought an onslaught of superhero films.

Once COVID hit, things simmered down for a while but as everything goes back to normal, both studios are offering their latest fare.  Unfortunately, that has included some not-so-great films in the last year and a half and DC's newest release, Black Adam, is unfortunately included.  Starring Dwayne Johnson (The Jungle Cruise), it is coming to 4K,  Blu-ray, DVD, and Digital HD to help ring in the New Year.

In the Middle Eastern land of Khandaq, King Ahk-Ton ruled with an iron fist, forcing the Council of Wizards to give a young, slave boy the powers of Shazam.  Throughout the centuries, he became a legend as the heroic savior of their land.  In present-day, Khandaq, the intergang oppresses the people until the day archeologist, Adrianna Tomaz (Sarah Shahi; Alias) awakens the hero, Teth-Adam/Black Adam (Johnson) to fight the evil tyrants. However, The Justice Society - Hawkman (Aldis Hodge; Hidden Figures), Doctor Fate (Pierce Brosnan; Goldeneye), Atom Smasher (Noah Centineo; The Fosters), and Cyclone (Quintessa Swindell; Voyagers) - is sent to prevent Black Adam from destroying Khandaq...again.

It is obvious why Johnson was cast in the title role.  He is a HUGE box office draw, can portray an extremely menacing character, and would be believable as an ancient superhero.  Unfortunately, he isn't the strongest of actors and he is so muscular he looks slightly grotesque in his costume.  Monetarily it's obvious why they cast him, but they could have picked a better actor if they were going for quality.

Hodge, Centineo, and Swindell offer some credibility but Brosnan steals the show. As the elder statesman of the society, he brings an air of calmness to chaotic battle scenes and imparts wisdom with a British accent (even though he is Irish by birth).  Like another British elder in a competing superhero Universe, Brosnan offers sophistication among the younger members of the team.  Casting him was a smart choice that paid off in the finished product.

Warner Bros. Home Entertainment division brings Black Adam to stores to start off 2023 with a band (or a lightning bolt if you prefer).  The 2160p high-definition video is exceptionally well done with only minor moments where the CGI is evident.  Otherwise, the details are sharp and clean which is often difficult to achieve with movies that rely on a number of special effects.

The Dolby Atmos audio has a great deal of ambient noise throughout and the dialogue and soundtrack are both crisp and robust offering the viewer a fully immersive experience.  The 60-plus minutes of extras are only available on the Blu-ray Disc and include: The History of Black Adam, Who is the Justice Society?, From Soul to Screen, Black Adam: A Flawed Hero, Black Adam: New Tech Old World, Black Adam: Taking Flight, Khandaq: Designing a Nation, The ROCK of Eternity, Costumes Make the Hero, and Black Adam: A New Type of Action.

DC Comics has been competing with the Marvel Cinematic Universe for over ten years, with each franchise cranking out movie after movie in order to claim box-office superiority.   Sadly, DC usually lags behind the MCU on the movie front and Black Adam continues that streak.  Amazingly good video, directing,  special effects, and excellent audio quality can't make up for a strong plot.

I'm not sure if the recent firings at DC Comics will bring freshness to the franchise but it couldn't hurt to try.  While it is sad to see such great actors like Henry Cavill (Mission: Impossible - Fallout) and Gal Gadot (Death on the Nile) lose their roles as superheroes,  a reboot might just be what the DCEU needs.

In the meantime, if the DCEU is right up your alley, then you will want to grab Black Adam on 4K this week.

For more information about Black Adam visit the FlickDirect Movie Database. This release has been provided to FlickDirect for review purposes. For more reviews by Allison Rose please click here.