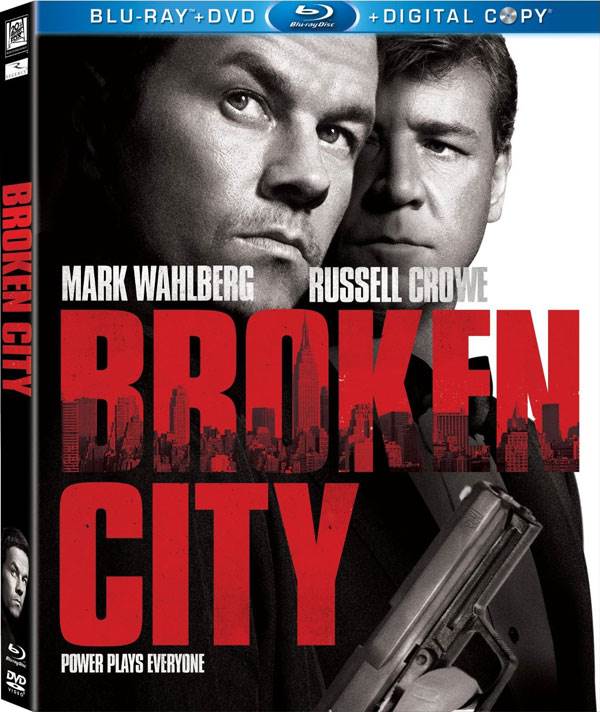 Purchase   DVD/Blu-ray/4K UHD
Midway through Broken City, one character incredulously remarks, "Private eyes still exist?" The gumshoe-for-hire profession does seem old-fashioned and mostly unnecessary now. You could describe Broken City the same way: old-fashioned and mostly unnecessary. Penned by first-time screenwriter Brian Tucker and directed solo by Allen Hughes—one half of the Hughes Brothers, best known for Menace II Society and, most recently, The Book of Eli—the film struggles falteringly to be a neo-noir in the Chinatown mold, all political corruption and moral ambiguity, shady land dealings and romance gone sour. The problem here is that Tucker and Hughes have merely parroted the style instead of reinvigorating it and making it their own. Look no further than Nicholas Winding Refn's Drive to see that film noir has evolved in exciting new ways; conversely, Broken City feels like an ill-considered step backwards, from its tries-too-hard dialogue to its pointlessly convoluted plot, which recycles a few too many genre cliches.

It's unfortunate, because Mark Wahlberg is strong in the role of Billy Taggart, a disgraced former New York City cop who becomes embroiled in a mayoral election year scandal. In the film's prologue, Taggart cold-bloodedly shoots down a black teenager accused of raping and murdering the sixteen-year-old sister of Taggart's actress girlfriend, Natalie (Natalie Martinez). With the help of Police Chief Fairbanks (Jeffrey Wright) and Mayor Hostetler (Russell Crowe), a piece of crucial evidence against him goes missing and Taggart is acquitted of all charges. He's forced to resign from the force, however, and seven years later he's barely scraping out a living as a private investigator, tracking down unfaithful husbands by night and hounding their wives for late payments by day. Naturally—as these sorts of films go—he's also a recovering alcoholic, forever tempted by the bottle.

Shortly before the election, Taggart gets an out-of-the-blue call from Hostetler, who's in a tight race against liberal up-and-comer Jack Valliant—how's that for a too-obvious name?—played by a long-haired Barry Pepper. Hostetler suspects that his wife, Cathleen (Catherine Zeta-Jones), is having an affair, and he's worried that Valliant's campaign manager, Paul Andrews (Kyle Chandler), will somehow use this against him, noting—rather unbelievably—that citizens will elect a homosexual or a minority, but not a cuckold. He hires Taggart to find out what he can about Cathleen's extramarital activities, and—shock of shocks—the P.I. discovers that the mayor's wife has been rendezvousing with none other than Mr. Paul Andrews, meeting at a beach house out in Montauk.

Nothing is exactly as it initially seems, though, and from here the plot becomes increasingly knotted, wrapped around a $6 billion insider land development deal that could screw over the residents of a massive public housing project. An assassination meant to look like a robbery, a marriage on the rocks, a secret gay affair, a construction company heir with daddy issues—every new twist elicits more of a "huh?" than an "oh, wow." As proof that there's too much going on here, each development requires oodles of expository monologues just to explain the basics of what's happening. (I haven't even mentioned Taggart's hatred of liberal, fedora-wearing Hollywood types, manifested in an entirely unnecessary subplot about his girlfriend's movie career.) On the subject of the dialogue—it's awful, take this little speech from the police chief to Taggart: "I'm taking Hostetler down. If he sees election day, it'll be inside a cage, like a monkey. Now, you either help me, or you'll be in there with him sucking on bananas too."

It's hard to say whether the dialogue affects the quality of the performances or vice versa, but much of the acting here is weirdly off. With wiry blond hair and a bad New Yawk accent, Russell Crowe seems completely out of place, and Catherine Zeta-Jones—the closest the film comes to a femme fatale —is almost sluggish onscreen. (It doesn't help that she's practically written out of the movie by the end of the second act.) Character actor Jeffrey Wright is solid as usual, though—you may remember him from Syriana or Casino Royale—and he stands tall with Mark Wahlberg while the rest of the movie cracks and crumbles around them, as dysfunctional as the titular city. Still, despite its many flaws, the movie is more disappointing than outright, immediately dismissible bad. It's watchable, at the very least. To give some sort of gauge, you may never actively see it again unless you're on a long plane ride and have no other entertainment options.

Broken City was shot digitally but you'd hardly know it; most of the movie has a gritty, textured, almost film-like quality that the Blu-ray's 1080p/AVC encode captures well. 20th Century Fox has given Broken City the now-standard DTS-HD Master Audio 5.1 lossless surround treatment, which is more than capable of handling the film's fairly low-impact sound design. There are a few action-heavy scenes that are more energetic—a car crash, a fight or two or three—but the track is usually reserved and dialogue-driven.

Despite a lackluster film, there are some noteworthy special features. "Deleted Scenes": Six deleted scenes, including an alternate ending. "Putting It All Together": An extensive making-of documentary that covers everything from the script—a Hollywood "black-list" favorite long caught in development hell—to the casting, cinematography, and directorial vision. There's a good mix of behind-the-scenes footage and interviews with just about everyone involved. And finally the theatrical trailer as well as some sneak peeks at upcoming films.


With films like Drive, neo-noir is definitely seeing a resurgence. Unfortunately, Broken City will probably be one of the least remembered of the recent bunch. It wants to be Chinatown but it falls short; coming off dull, unoriginal, and less than the sum of its many cinematic influences. Mark Wahlberg's smooth tough-guy performance stands out, but only because the rest of the movie is so unmemorable, a tangled knot of cliche storylines we've seen done numerous times before in much better films. It's passably watchable if you're sick in bed or bored on a rainy Saturday afternoon, but if you're a fan of crime thrillers, Broken City is not something you should feel obligated to rush out and see.
Cast:
Directed By:
MPAA Rating: R

For more information about Broken City visit the FlickDirect Movie Database. This release has been provided to FlickDirect for review purposes. For more reviews by Chris Rebholz please click here.