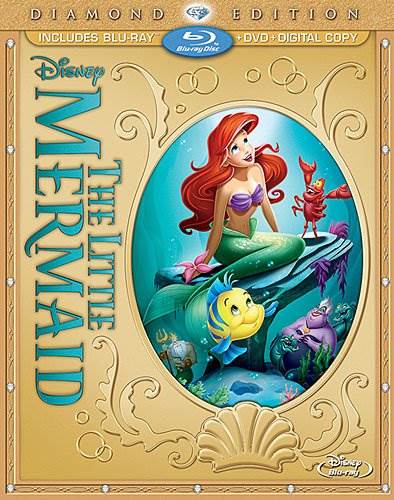 Purchase   DVD/Blu-ray/4K UHD
No one factor was singularly responsible for The Little Mermaid's success. It wasn't a surefire hit from the outset. Walt Disney Animation wasn't riding high, gaining momentum or in the midst of restoring its reputation. (Yet.) A new era in Disney animation had yet to begin, much less be realized or dubbed the Disney Renaissance. In November of 1989, acclaim, awards and classic status were still something of a long shot, and animated filmmakers Ron Clements and John Musker weren't assured of anything, especially box office success, critical respect and audience appeal. Having cut their directorial teeth on The Great Mouse Detective just three years prior, Clements and Musker used every minute of the production of The Little Mermaid to do the only thing they could: make the best movie possible with all the tools at their disposal. Those tools included a sharp script based on a cherished fairy tale, by Hans Christian Anderson no less. Colorful characters and memorable villains. Songs of actual quality penned by composer Alan Menken and lyricist Howard Ashman. Innovative animation techniques (among other advances, Mermaid was the first Disney animated production to use the CAPS digital coloring system, although only one CAPS scene made its way into the final film). The list goes on, and even extends beyond the walls of the Mouse House, where Don Bluth, Steven Spielberg, and the VHS home video market all played a role in setting the stage for feature animation's revival.

The success that came and the Renaissance that was (unofficially) launched all seem so inevitable in hindsight. The Little Mermaid won rave reviews, earned more than $200 million worldwide, imprinted itself on the hearts of countless little girls, marked the beginning of one of Disney's most productive and successful eras, took home several Oscars and Golden Globes, stormed the home video market, and inspired many an animated film that would follow. Above all, it continues to stand as one of Disney's most beloved classics. No, twenty-four years after its debut, Ariel's adventure isn't as spry or nimble as it once was. And yet a very real, very palpable magic remains, coursing through its waters and pumping through its veins; a stirring, spirited magic that, in the early '90s, overflowed into Beauty and the Beast and Aladdin, the Disney Renaissance greats.

Sweet, free-spirited teenage mermaid Ariel (voiced by Jodi Benson) is obsessed with the surface world, collecting trinkets and trash that sink to the bottom of the ocean and longing for a glimpse at a real human being. Such things are forbidden by her father, King Triton (Kenneth Mars), who warns Ariel of the dangers involved to no avail, and assigns his advisor, Sebastian the Crab (Samuel E. Wright), to keep an eye on her. Rebellious daughters are rebellious daughters everywhere, though, even under the sea. With a reluctant Sebastian and best friend Flounder (Jason Marin) in tow, Ariel makes her way to the surface, where she almost immediately falls in love with a human prince, Eric (Christopher Daniel Barnes). When her father finds out, he's furious, confining Ariel to her room, which she promptly escapes. Succumbing to a deal offered by the evil sea-witch Ursula (Pat Carroll), Ariel relinquishes one of her most prized possessions -- her voice -- to obtain the one thing she wants more than anything: to be human. But Ariel soon learns witches aren't to be trusted, as Ursula's only interest is in making the little mermaid her slave.

While The Little Mermaid has aged quite gracefully, it isn't without its wrinkles. Ariel is more in control of her future than pre-Renaissance Disney princesses, and yet after her rebellion there isn't much coming-of-age empowerment to be had. Her destiny is continually secured by a boys club of well-intentioned males (single-dad Triton, dreamy prince Eric, blustery Sebastian, kindly Flounder and dim-bulb Scuttle the Seagull), and her arc is essentially Princess Pines for Her Prince Charming. Without a mother, Ursula is the only female in Ariel's life with any sway. And while that certainly wasn't Musker or Clements' intent, there it is, right out in the open: another damsel in distress, literally robbed of her voice and freedom, in need of rescue, which Eric pulls off when Ariel's problems get (again, literally) too big. There's also the small matter of Triton's deep-seated and (surprise!) validated xenophobia. At no point is the King's mantra -- beware the humans, they're different and dangerous -- resolved or amended. Ariel and Eric have a happy ending courtesy of Triton's blessing, but enlightenment never really descends on dear old dad, leaving his original warning dangling in the wind, largely unaltered and unaddressed. Still, as princess-in-peril tales go, it's all rather harmless and easy to overlook, and I'd suggest for the sake of entertainment doing just that.

It's the animation that's more dated than you might remember. Like Beauty and the Beast, The Little Mermaid rests on the precipice of a revolution rather than basking in the light of a fully revealed renaissance, and the stunning fruits of the fledgling new era's animation had yet to ripen. To be clear, it's by no means a poorly animated film. Innovation abounds, as do daring sequences above the waves and below, and the delightfully designed and developed characters remain some of the most convincing and expressive humans and creatures in Disney's hand-drawn canon. Musker and Clements used actors and shot live-action reference scenes to accomplish the feat, but the results speak for themselves: the subtle gestures, the all-too-human reactions, every scrunch of a brow or flick of a wrist, it's all so absorbing. At the same time, there's a telltale roughness, sometimes even a hurriedness, to the animation; a minimalism that isn't so much stylistic as it is practical.

All that said, The Little Mermaid captures and distills the essence of the Disney classics of old, all while ushering in a new dawn. With renewed focus, unforgettable songs, bewitching fairy-taling, and a cleverly crafted cast of undersea characters, it's hard to feel anything but affection for the film. Quoth my understandably anti-Mermaid son, who's on the cusp of turning nine: "I'm surprised. It isn't terrible. I thought it was just a girl's movie, but it's fun." Pressed for further impressions, he naturally began back-pedaling, but still finished the movie without putting up a fight. And at no point was I making him watch it. He wandered in mid-viewing, he just didn't wander out. There are laughs to be had, cheers worth letting out, and enough heart to make Ariel's adventure something special; something that just as easily could have come from Walt Disney himself thirty, forty or even fifty years before, when the man behind the Mouse first started tinkering with adaptations of Hans Christian Anderson's original story. Good Disney movies are built upon their predecessors. It's the great Disney movies, though, that are cut from the same cloth, carved from the same oak, born of the same magic. The Little Mermaid is one of the Disney greats, and I have no doubt we'll one day be celebrating its thirtieth, fortieth and fiftieth anniversaries. Its every element may not be timeless, but the film is unmistakably so.

I can't even begin to tell you, then, how relieved I was while watching The Little Mermaid and its near-perfect 1080p/AVC-encoded video transfer, one that should please both purists and modern animation fans alike. Yes, the animation is dated by Disney Renaissance standards. Yes, slight softness is apparent in the original source from time to time. And yes, the image isn't always as vibrant as the film's colorful characters. But none of these inherent shortcomings should be held against Disney's (mostly) faithful restoration and presentation, which rarely disappoints. I'm of the opinion that the studio should be commended for both offering dynamic new 7.1 lossless remixes with their animated catalog and managing to stay true to the tone and tenor of each classic's original sound design and audio presentation. It requires a delicate balance, albeit one The Little Mermaid exemplifies. Enhance the original 70 mm 6-Track Dolby Stereo soundscape too much and you risk creating an inconsistent, jarringly artificial, off-putting experience. Tweak it too little and you risk a thin, two-dimensional, disappointiing remix. Thankfully, neither applies here.

The Blu-ray edition of The Little Mermaid is a Disney animated release of the highest order. Rather than a hyper-bright, over-processed re-master and high definition presentation, Disney's encode is a filmic wonder with very little that could be legitimately labeled an issue. Its DTS-HD Master Audio 7.1 surround track follows suit, and its full complement of supplemental features -- old and new -- injects even more value into an already enticing Diamond Edition set. It's a wonderful little animated musical with the sort of Blu-ray release every Disney classic deserves.

For more information about The Little Mermaid visit the FlickDirect Movie Database. This release has been provided to FlickDirect for review purposes. For more reviews by Chris Rebholz please click here.

Allison Rose
The Little Mermaid Anniversary/Signature Edition is a worthwhile purchase and a must have for anyone from the ages of three to fifty.
Full Review | Grade: A