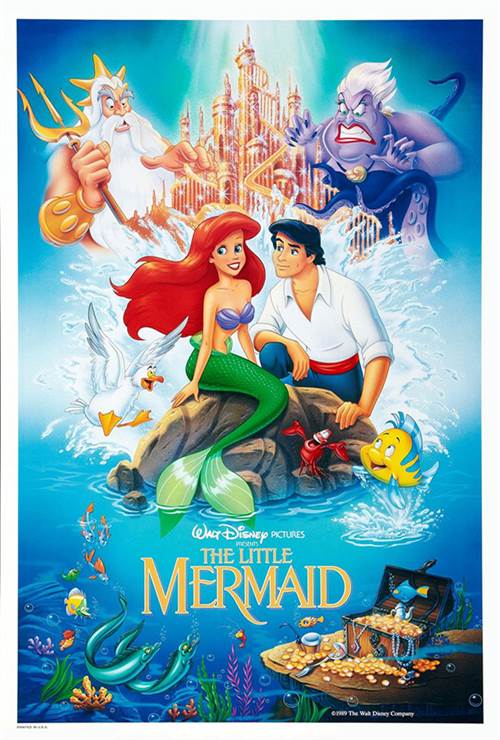 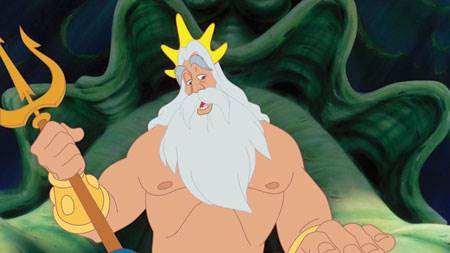 Ariel, the fun-loving and mischievous mermaid, is enchanted with all things human. Disregarding her father's order to stay away from the world above the sea, she swims to the surface and, in a raging storm, rescues the prince of her dreams. Determined to be human, she strikes a bargain with the devious seawitch, Ursula, and trades her fins and beautiful voice for legs. With her best friend, the adorable and chatty Flounder, and her reluctant chaperone Sebastian, the hilarious, reggae-singing Caribbean crab, at her side, Ariel must win the prince's love and save her father's kingdom - all in a heart-pounding race against time!

Drawing from a talented "pool" of vocal talent, THE LITTLE MERMAID's leading roles went to actors with extensive musical theater backgrounds. As the voice of Ariel, voice-over and Broadway star Jodi Benson supplies the perfect blend of innocence and wide-eyed wonder to the independent young mermaid. Hollywood legend Buddy Hackett turns in a top-flight performance as the squawking seagull, Scuttle, and stage veteran Pat Carroll provides the villainous voice of the crafty seawitch, Ursula.

Download The Little Mermaid in Digital HD/4K from the iTunes store.

Listen to the The Little Mermaid soundtrack on Apple Music.


Harry Styles In Talks to Join Little Mermaid Cast  7/17/2019 12:43 PM EST
Harry Styles is in talks to join the cast of the upcoming live-action version of "The Little Mermaid" as Prince Eric.Styles would join Halle Bailey, who will be playing the role of Ariel, as well as Melissa McCarthy, who is playing Ursula.The Rob Marshall directed film will include original songs from the 1989 animated classic, as well as some original music from Alan Menken and Lin-Manuel Miranda...  More>>

Awkwafina and Jacob Tremblay Join Cast of Live-Action Little Mer...  7/2/2019 2:00 PM EST
The production of Disney's live-action "The Little Mermaid" is chugging along, and now some casting news has been released. Jacob Tremblay has signed on to play Flounder and Awkwafina will be playing Scuttle.Tremblay and Awkwafina will be joining Melissa McCarthy, who will be playing Ursula the Sea Witch. The newest in a series of Disney live-action remakes, the film will be directed by Rob Marsha...  More>> 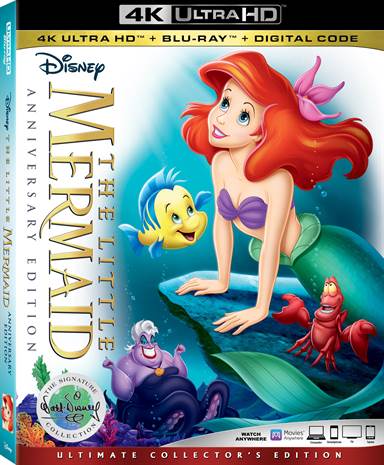 "Look at this Stuff. Isn't it neat? Wouldn't you think my collection's complete?"…With these now iconic words, Disney animation experienced a resurgence in their films.  Throughout the 1970s and 1980s Disney films weren't as popular as they had been in the past but that all changed in 1989 with the release of The Little Mermaid.  This one film ushered in a new era of success for Disney animation that has continued for the past 30 years and now almost every little girl grows up since has been exposed to this magnificent movie.  This month, to celebrate the 30th anniversary of The Little Mermaid, Disney is rereleasing this popular title in 4K for the first time.

For those who aren't familiar with the movie, it is about a mermaid named Ariel( (Jodi Benson; Enchanted) who dreams of a life out of the water.  As one of the daughters of King Triton (Kenneth Mars; Young Frankenstein), she has certain responsibilities  - ones she often forgot about much to her father's dismay. When she misses her big concert debut her father decides to have one of her aides look after her so he appoints his court composer, Sebastian (Samuel E. Wright; Dinosaur).

Sebastian follows Ariel and her friend Flounder (Jason Marin; Back to the Future) to her secret cave where she has amassed all kinds of memorabilia from the surface world (where she is strictly forbidden to go).  When her father finds out and destroys the cave Ariel runs to Ursula the sea witch (Pat Carroll; Freedom Writers) to trade her voice for legs so she can live on the surface and find the man she fell in love with, Prince Eric (Christopher Daniel Barnes; The Brady Bunch Movie). However, when she fails to win Eric's heart (partially because Ursula doesn't play fair), she becomes Ursula's slave forever.

The vocal talents of Benson as the mermaid princess have become iconic and everyone recognizes the famous song, Part of Your World.  Comedian Buddy Hackett (It's a Mad, Mad, Mad, Mad World) also lends his voice to scuttle the bird and Rene Auberjonois (Boston Legal) is Louis.  The rest of the cast blends well bringing this undersea world to life.

As many consider the film to be "Broadway in cartoons" the music is as well-known as a picture of Ariel herself and Ursula is one of Disney's best villains.   As The Little Mermaid merchandise is still sold in stores today it is a testament to how well this story and music has stood the test of time. Every Halloween you can always see at least a few little mermaids roaming the neighborhoods trick or treating.

The 4K version is definitely an upgrade in picture quality from the Blu-ray version.  While the scenes under the water seem a little darker and murkier (perhaps on purpose) the land scenes are bright an crisp with a multitude of colors to attack your eye.  The Dolby Atmos accentuates the iconic soundtrack well with a full-bodied and robust sound.  The crashing of the waves or the sound of the seagulls is so rich you could close your eyes and imagine being at the beach. The extras are mostly housed on the Blu-ray disc with exception of a featurette on the digital download celebrating the 30th anniversary/signature edition.  The extras include: Sing-Along Mode, Alan Menken & the Leading Ladies, "What I Want From You Is…Your Voice", Stories From Walt's Office: Gadgets & Gizmos, #TreasuresUntold, DCapella "Part of Your World" Music Video, Deleted Character: Harold The Merman, Under The Scene: The Art Of Live-Action Reference, Howard's Lecture, Audio Commentary With Ron Clements, John Musker and Alan Menke, Classic Bonus Preview, and "Part of Your World": A Look Back.