The cast of Baggage Claim is certainly game and tries hard, but there's the whiff of desperation in many scenes. You've seen all of this before, and in better films, to boot. Maybe even a couple by Tyler Perry, perish the thought. 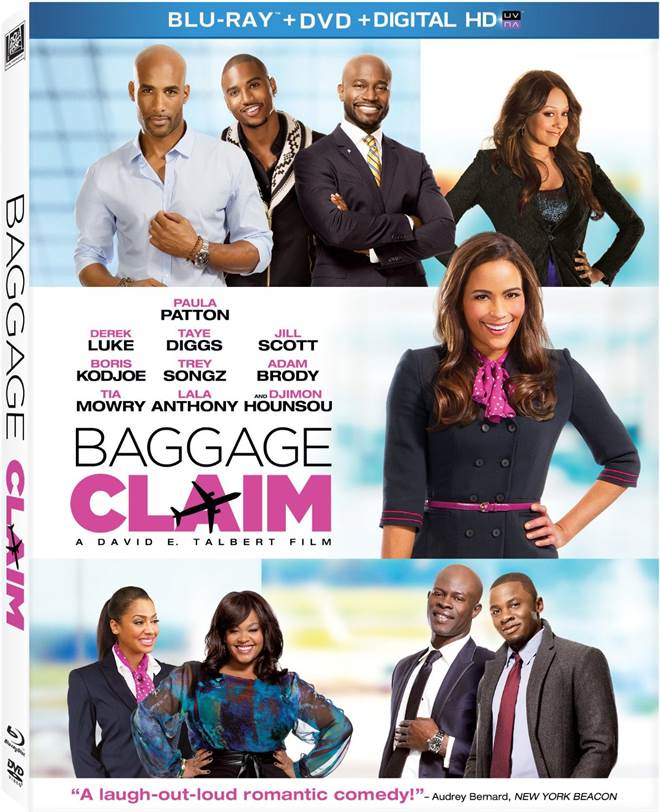 Purchase   DVD/Blu-ray/4K UHD
Pray tell, has Tyler Perry started working under pseudonyms other than Madea? For all intents and purposes, Baggage Claim could be yet another Perry enterprise, for it depicts glamorous, upscale African Americans confronting a host of supposedly comedic issues, with nary a hint of real character or even much story to propel the film along. This is a fairly cliché ridden, rote rom-com, positing a lovely Paula Patton as a flight attendant with the unlikely name of Montana Moore. Montana is desperate to find her true love but seemingly fated to end up with one Mr. Wrong after another. Montana's predicament becomes more acute when her younger sister actually gets engaged, and Montana becomes intent of finding her life partner within 30 days, so that she can attend her sister's wedding as an engaged woman herself.

There is nothing even remotely unpredictable about Baggage Claim, though the film tries to work up a comedic froth by having Montana traipse rapidly through the lives of many of her ex-boyfriends to see if they'd be compatible matches. The fact that the film has already posited a childhood friend named William (Derek Luke), who's always lurking just in the background and who obviously has feelings for Montana, doesn't mean there's even much suspense about where this film is going to end up. Add in the requisite randy best girlfriend Gail (Jill Scott) and her gay best male friend Sam (Adam Brody), and all the pieces of this completely rote outing fit together in precisely the way you'd expect.

Baggage Claim is presented on Blu-ray courtesy of 20th Century Fox Home Entertainment with an AVC encoded 1080p transfer in 1.85:1. The film boasts the typically smooth, nicely detailed ambience of this format, though there appears to have been some stock footage used for establishing shots for Montana's global escapades, some of which don't quite rise to the level of sharpness as the bulk of the film. Colors are often gorgeously saturated and varied, and fine detail is exceptional in midrange shots and close-ups. Baggage Claim's lossless DTS-HD Master Audio 5.1 mix is a bit anemic on the low end, but otherwise offers a decently immersive experience, at least when it comes to ambient environmental effects. Dialogue is cleanly presented and the track presents no issues to speak of.

Special Features:The cast of Baggage Claim is certainly game and tries hard, but there's the whiff of desperation in many scenes. You've seen all of this before, and in better films, to boot. Maybe even a couple by Tyler Perry, perish the thought.
Cast:
Directed By:
MPAA Rating: PG-13

For more information about Baggage Claim visit the FlickDirect Movie Database. This release has been provided to FlickDirect for review purposes. For more reviews by Chris Rebholz please click here.