Home / Reviews / Dumb And Dumber To

While Dumb and Dumber has a very large, built in audience that loves this lowbrow kind of humor, I just can’t see the point. 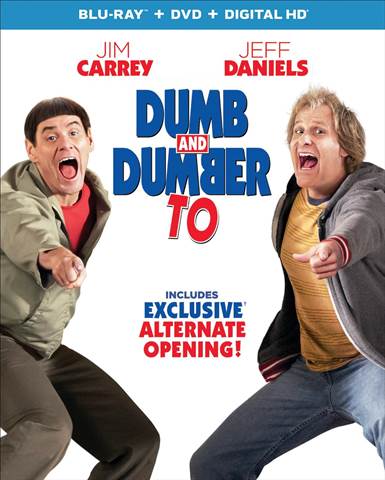 Purchase   DVD/Blu-ray/4K UHD
Lets get this out the way first Dumb and Dumber To is …well….dumb, I mean REALLY dumb. However, if you are familiar with the original Farrelly Brothers film, Dumb and Dumber (1994), you would except this.

The story is pretty simplistic. After twenty years of Lloyd Christmas (Jim Carrey; Ace Ventura, The Mask) pretending to be catatonic, he joins his best friend Harry Dunne (Jeff Daniels; The Newsroom, Gettysburg) as they embark on a cross-country journey to find Harry's long lost daughter.    What occurs on this trip is a series of not so funny scenes that mostly makes you want to groan.

In true Farrelly and Dumb and Dumber style, lowbrow and crude hijinks ensue which really only caters to the lowest common denominator. Sadly, most of it wasn't even funny enough to make the enjoyable to watch and at almost 2 hours running time you start to ask yourself why you even bothered.
Carrey was very good, falling back on the humor he is known for.  Daniel's, however, was a bit of a disappointment.  I didn't find his character believable at all and he ended up distracting me the entire movie.  This is particularly disjointing because he is excellent in so many of his other rolls.  Perhaps he should stick to serious dramas.

The Blu-ray does offer 1080p video, making the picture detailed with beautiful colors that are lively and free of noise.   The DTS-HD Master Audio 5.1 lossless track allows the film to be heard over the entire spectrum with excellent clarity.

For the first time in a long time this Blu-ray has a full set of features instead of the fluff now common on most releases.   Some notable extras include an alternate opening, a look at the famous actors who have cameo roles in the film, a great gag reel, and an overview of the cars in the movie including the Mutt Cutts van seen in the theatrical trailer.  However, the deleted/extended scenes could easily have been skipped.  Ironically, the extras ended up being funnier than the actual film.

While Dumb and Dumber has a very large, built in audience that loves this lowbrow kind of humor, I just can't see the point.  If you are a fan of other Farrelly Brothers works then you will probably enjoy Dumb and Dumber To. I wish I could get the two hours back I sat watching it.  D on actual film, but B+ on Blu-ray content; Overall C-

Purchase a DVD/Blu-ray/4K UHD physical copy of Dumb And Dumber To today at Amazon.com

Download Dumb And Dumber To in Digital HD/4K from the iTunes store.

For more information about Dumb And Dumber To visit the FlickDirect Movie Database. This release has been provided to FlickDirect for review purposes. For more reviews by Nathan M Rose please click here.

Dumb And Dumber To images are © Universal Pictures. All Rights Reserved.