Tomorrowland has an upbeat message about society and is more in line of the type of film Walt Disney would have approved his company making. 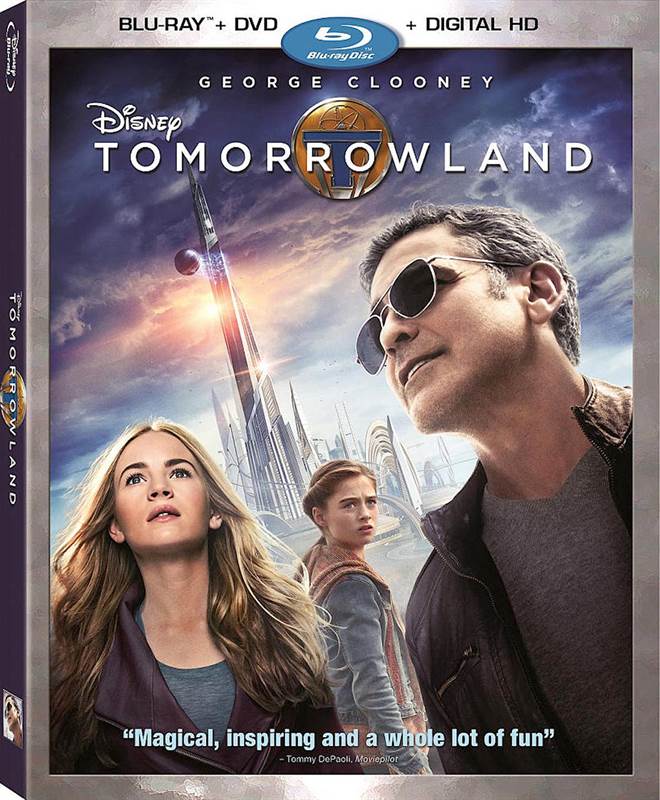 Purchase   DVD/Blu-ray/4K UHD
"If we can dream it, we can do it", the line made famous by the now retired Horizons attraction at Epcot in Walt Disney World, perfectly sums up the message of hope that the new film, Tomorrowland, tries  to convey it's audience.

Tomorrowland, written/directed by Brad Bird (Mission Impossible: Ghost Protocol, The Incredibles) and writer Damon Lindelof (Prometheus, Lost), tells the story of two generations of dreamers, Frank Walker (George Clooney; From Dusk Till Dawn, Ocean's Eleven) and Casey Newton (Britt Robertson; Cake, The Longest Ride) as they set out to make the world a better place. However, along the way, the world population stops caring, and the two of them, along with Tomorrowland recruiter Athena (Raffey Cassidy; Dark Shadows, Snow White and the Huntsman), set off on a quest to save the world from total destruction.

The film spares no expense with the imagery and special effects used throughout the film, and it pays off. The recreation of the World's Fair is a nice treat, allowing viewers who have only read about the event to experience it through the eyes of the young Frank Walker.  The creation of Tomorrowland is one of wonderment and amazement, as the designs of Walt Disney and his Imagineers of the past come to life and are fully realized on screen.

One of the strongest aspects of Tomorrowland is the superb cast that director Brad Bird was able to assemble for the film. Each cast member put their all into their parts, and it truly shines through on the screen. Clooney, Robertson, and Cassidy's characters play off each other very well, while Laurie is born to play the disturbed and deeply troubled antagonistic Nix.

During it's theatrical run, one of the problems that plagued the studio with trying to market Tomorrowland was the fact that they didn't know what kind of film they had on their hands. Disney marketing put out very generic trailers of the film which caused audiences to not be sure if it was something they wanted to see. To make matters worse, Tomorrowland tries to be a film that hearkens back to a time when Walt Disney Pictures was less a corporate juggernaut; to when they actually cared about making a difference in the world by teaching through entertainment. This is not the type of entertainment today's audiences are familiar with, or care about.

As one would expect from today's Blu-ray's releases, Tomorrowland's picture quality is simply amazing. There is zero artifacting and the colors are vibrant and bright. The black levels are spot on as well, and the sharpness and background details are sharp.

The DTS-HD Master Audio 7.1 certainly packs a punch, which adds to the viewers enjoyment. The audio puts your home theater to the test with it's large dynamic field that utilizes every speaker in your system and will have even your most critical audiophile in awe. The rear speakers do a nice job with the special effects, as well as the score by Michael Giacchino, while the center channel dialog comes through crisp and clear.

The Blu-ray combo package has a very nice selection of extras including deleted scenes, a digital copy of the film for both iTunes and Ultraviolet,  as well as a large section of featurettes:

While Tomorrowland was not the box-office hit in theaters that Disney had hoped it to be, it should hopefully have a nice shelf life on Blu-ray, as the film has an upbeat message about society and is more in line of the type of film Walt Disney would have approved his company making.
Cast:
Directed By:
MPAA Rating: PG

For more information about Tomorrowland visit the FlickDirect Movie Database. This release has been provided to FlickDirect for review purposes. For more reviews by Nathan M Rose please click here.

Allison Rose
Tomorrowland -- If you are a Disney fan, go see it for the novelty. Just don't expect too much.
Full Review | Grade: C