Overall, Minions has a very upbeat quality to it, and while the story is a bit lacking, the hijinks of the Minions help save the film from becoming another film in the 3D animated cannon fodder. 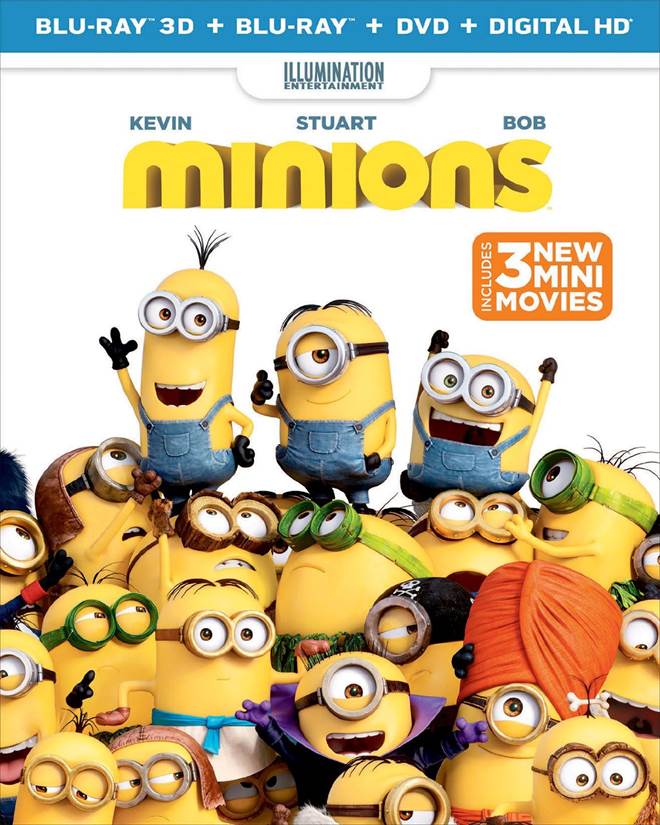 Purchase   DVD/Blu-ray/4K UHD
If you are a fan of Despicable Me 1 or 2, then you are already familiar with the yellow, super cute guys called Minions.  So, what are these little creatures? How did Gru end up with them? How long have they been on this planet? To answer these questions and more, Universal pictures and Illuminati teamed up this year to give them their own movie simply entitled, Minions.

After turning from single cell organisms to fully grown Minions, the only thing they ever want in life (aside from eating Banana's) is to serve a master. They are at their happiest when they are being bossed around. However, each time they think they found their "forever master" a series of mishaps occurs which leads to the untimely death of their bosses. After losing all hope, the Minions find themselves in solitude in the frozen north, wasting away with an unhappy existence. But, all hope is not lost. Minion Kevin, along with Stuart and Bob, go on a quest to find a new master and save their race.

Joining the cute little yellow bundles of joy in the film are the voice talents of Sandra Bullock (Speed) as evil Scarlett Overkill, Geoffrey Rush (Pirates of the Caribbean), Allison Janney (Spy), Jon Hamm (Mad Men) and Michael Keaton (Robocop). While these are not leading roles in the film, their supporting characters help add depth and another level of comedic elements to the story. Bullock appears to be having a wonderful time playing Scarlett Overkill, with her persona that consistently switches from cute little innocent school girl to raging lunatic.

While there is really never a sense of urgency or threat in the film, Minions provides a heart-felt good time, with tons of laughter, as the three down trodden heroes travel to the new world, then the underworld of Villain Con, and, finally, explore the United Kingdom all in the name of happiness.

The look and feel of the film has the same style as the two Despicable Me films that preceded it.  The colors are bright and vivid and truly shine through on the 3D Blu-ray release. At no time is artifacting visible on the disc and the 3D conversion adds quite a bit of depth perception to the story. At a time when the 3D industry is at a downturn, this film can easily be used as the poster boy on why it should continue to be used.

The Dolby Atmos lossless soundtrack comes through crisp and clear on the Blu-ray providing a dynamic sound range for the up-beat 60's soundtrack to fill the rears of your home theater, while the dialog plays through the center and front speakers. At no time did there appear to be a "tug-of-war" of sounds trying to compete for your attention.  It all blended very well to create a pleasant experience for the ears

Aside from the main film, The Minions Blu-ray sports three new animated short films featuring the title characters, and while I usually can't get enough of the little yellow shaped pills, the only short that stood out was Competition.  I would be able to watch over and over again, whereas the other two were just not that interesting.

While most animated releases usually do not contain much in the way of behind the scenes featurettes, this Blu-ray bucks the trend and has a plethora of shorts dedicated to the process of creating the film and how the Minions came into existence during the initial concept phase of Despicable Me. It gives some interesting insight into the process.

Overall, Minions has a very upbeat quality to it, and while the story is a bit lacking, the hijinks of the Minions help save the film from becoming another film in the 3D animated cannon fodder. If you are a fan of Despicable Me 1/2, or even just a fan of these cute little yellow guys, then this Bu-ray is highly recommended.   KING BOB!!!!

For more information about The Minions visit the FlickDirect Movie Database. This release has been provided to FlickDirect for review purposes. For more reviews by Nathan M Rose please click here.

Allison Rose
Minions -- If there is one take away from the film, it would have to be this…KING BOB!!!!!
Full Review | Grade: C