Presented in 1080p high definition video, the picture is very impressive with fantastic colors and extremely clear images.  The 3D version of the film pops off the screen and add great depth to the presentation of the film. 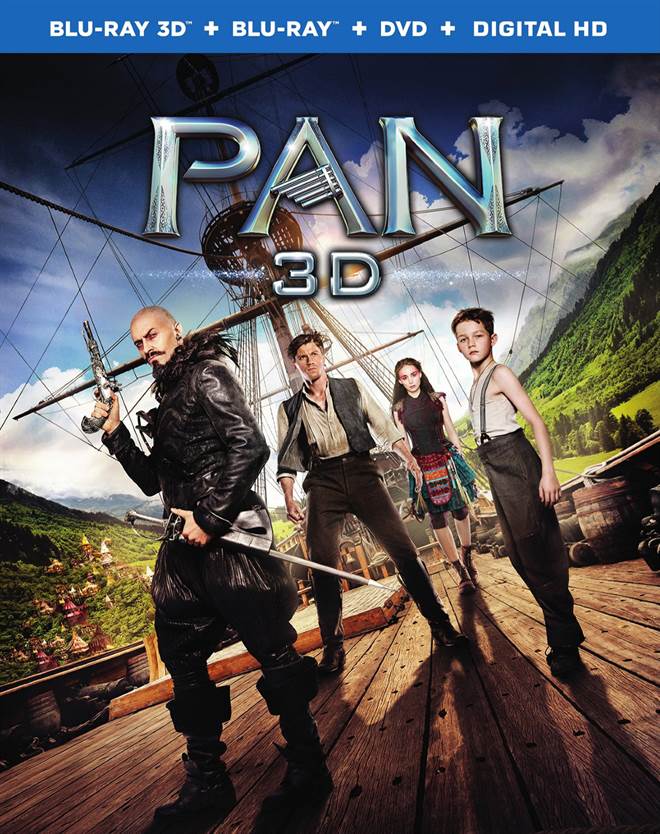 Purchase   DVD/Blu-ray/4K UHD
Whether or not you have seen one of the many versions of the classic story, everyone has heard the tale of Peter Pan.  Peter is a young boy who lives in Never Never Land, and flies all over the world looking for "lost boys who, like himself, don't want to ever grow up.  He has a fairy named Tinker Bell for a friend and his archenemy is Captain Hook.

What people don't know is the story of how Peter Pan became who he is or why Captain Hook is his nemesis.  New to 3D Blu-ray and DVD, the movie Pan tries to answer some of those questions while taking an entertaining look at both individuals' pasts.

This newest insight begins in an orphanage in London during World War II.  Peter (Levi Miller; Terra Nova) is one of many boys snatched from his bed only to end up in the mines of Never Never Land.  Looking for fairy dust, or pixum, thousands of young boys work to harvest the precious and rare gem for Blackbeard (Hugh Jackman; Les Miserables) the pirate.  James Hook (Garrett Hedlund; Tron: Legacy), an older worker, sees Peter as an opportunity for escape.

What's good about the film is that it is a unique idea in a sea of so many sequels and it has a fairly strong cast.  What's bad about the film is almost everything else.  The story doesn't seem to work and some of the sets and costumes are too over the top.  Even Jackman, whom I usually love, can't persuade me to enjoy this movie.

The 3-disc set includes a DVD, a Blu-ray and a 3D Blu-ray.  Unfortunately, the packaging didn't accommodate for 3 discs and the two Blu-rays are stacked on top of each other, which I do not like.

The Blu-ray includes a few extras, such as the almost obligatory Commentary, The boy who would be Pan: a look at the young actor who plays Peter, Never grow up: The Legend of Pan: a retrospective of the story of Peter Pan, The Scoundrels of Neverland:  A look at Blackbeard and his crew, and Wondrous Realms: an inside look at the mines and Tribal territory of Neverland.  The last plays out like a ride at Disney World.

Presented in 1080p high definition video, the picture is very impressive with fantastic colors and extremely clear images.  The 3D version of the film pops off the screen and add great depth to the presentation of the film. The Dolby Atmos audio is terrific and one of the highlights of the Blu-ray quality edition.

Unfortunately, all of those good qualities can't make up for a mediocre script nor an almost cartoonish, boarding on caricature-ish, approach to the film.

For more information about Pan visit the FlickDirect Movie Database. This release has been provided to FlickDirect for review purposes. For more reviews by Allison Rose please click here.

Paul Kates
Geared for pre-teens, Pan should be fairly well received by those it is aimed at. Others may walk away feeling a little bit deflated.
Full Review | Grade: B