Home / Reviews / I Am Wrath

I Am Wrath had some great potential but needed more details and fuller script to allow these talented actors to do what they do best. 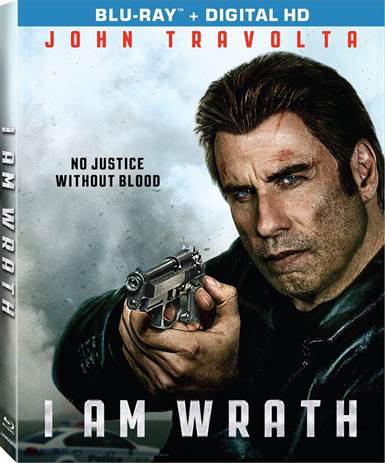 Purchase   DVD/Blu-ray/4K UHD
Oh how the mighty have fallen.  In the late 1970's, we fell in love with John Travolta in Saturday Night Fever and Grease. Then, we saw his resurgence in 1994 with Quentin Tarantino's Pulp Fiction.  Since then, he has had some hits and some misses in the movie business, and unfortunately, his latest I am Wrath falls into the latter category on a grand scale.  Let's hope he can follow it up with another blockbuster soon.

I am Wrath tells the story of Stanley, a seemingly quiet automotive forman who loves his wife and kids.  When he and Vivian (Rebecca De Mornay; Hand That Rocks The Cradle), his wife, are mugged and she is murdered, a grieving Stanley is all too happy to let the police handle it.  However, when Stanley identifies one of the murderers in a line up and then watches the perpetrator walk free, He decides to avenge Vivian's death.

But how is one simple auto mechanic going to track her killers and exact his revenge you ask?  Well, it seems Stanley is more than what he seems and has quite an interesting past. He decides to team up with his old special ops buddy (Christopher Meloni; Law & Order: Special Victims Unit), and together, they hunt down the guys responsible.  Little do they know Vivian's death is part of a plan that goes higher than they imagined.

The casting intrigued me because I typically like both Travolta and Meloni, but the script just didn't offer them enough to work with. At a runtime of 92 minute there wasn't enough time to flesh out the characters more, which is a shame. Maybe writers Yvan Gauthier (L.A., I Hate You) and Paul Sloan (Vigilante Diaries) thought they would save those details for a sequel, but that was a gamble they shouldn't have taken, as I can't imagine there will be a second movie. As for the cast, which also includes Sam Trammell (True Blood) and Amanda Schull (12 Monkeys), I am Wrath isn't a good vehicle to showcase their talents.

The 1080p high definition video and DTS-HD 5.1 audio are sharp, but the movie is muted in dark tones as much of the backdrop is at night.  It gives the piece a sinister feeling that sets the mood.  The blacks are certainly crisp with varying gradations and the few daytime scenes are vibrant.  The audio accentuates every gunshot, which is appealing if that is what you re looking for in a film.

The Blu-ray doesn't really offer anything unique to the viewer either.  The only "extra" is the filmmakers' (Russell and Sloan) commentary which offers little insight.  An interview with the stars and perhaps some discussion of the training techniques might have at least been slightly interesting and more appealing.

For those who enjoy lots of fight scenes, I Am Wrath should be something you would enjoy. There are plenty of intricately choreographed moments and the usual shoot 'em up gun violence, but not much else. Director Chuck Russell (Eraser) uses varying angles to make the fights more interesting, but for me, it doesn't do much.

I Am Wrath had some great potential but needed more details and fuller script to allow these talented actors to do what they do best. It's a shame because it is an interesting idea and there is so much talent among the cast that I felt was under ultilized. If want some good fight scenes with a little drama thrown in then grab this Blu-ray.

Purchase a DVD/Blu-ray/4K UHD physical copy of I Am Wrath today at Amazon.com

Download I Am Wrath in Digital HD/4K from the iTunes store.

For more information about I Am Wrath visit the FlickDirect Movie Database. For more reviews by Allison Rose please click here.

I Am Wrath images are © Lionsgate. All Rights Reserved.