Christopher Walken, who voices King Louie, the ape, is a far cry from the original Jungle Book. Walken was a brilliant choice to bring this re-invented character to life. 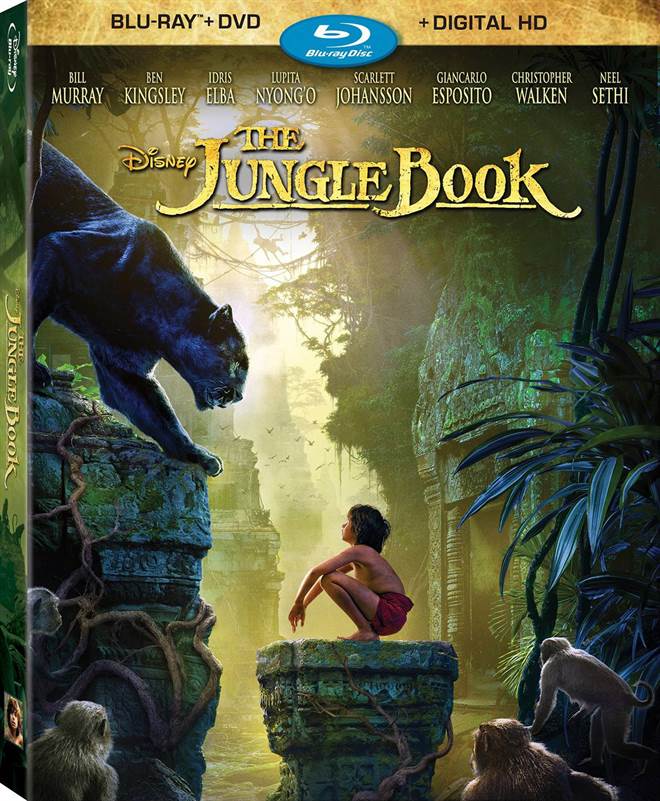 This is not The Jungle Book movie which I grew up with, which was released in 1967.    No flat pictures, no colorful animations, no hues of only browns and green, this movie comes to life with the depths of a real jungle and real animals surrounding Mowgli, the man-cub. The depth perception in the first scene alone, despite this being a 2D production, had me checking my eyes for 3D glasses that weren't sitting on my face.

It took a little getting used to watching "real" animals have a conversation with Mowgli, played by Neel Sethi, but a few minutes into the movie, the dialogue seemed natural coming from a panther, a wolf, her cubs, a tiger, and a bear, just to name a few.    Ben Kingsley voices the panther, Bagheera, who found Mowgli, the man-cub, after his human father was killed by a tiger, and brought home to the wolves.  Kingsley is the perfect voice to play Bagheera, always the voice of reason.  His voice is soothing and brings peace of mind to the viewer.

After being threatened by the tiger, Shere Khan (voiced by Idris Elba), Mowgli leaves the wolves and attempts to travel through the Jungle to the man-village.  In his travels, he meets the lovable bear, Baloo, voiced by Bill Murray, who saves him from a mighty python.  The python, who almost had Mowgli as a meal, recounted how Mowgli came to the jungle.  It turns out that our big, lovable bear hero, who's not afraid of the big bad Python, is afraid of heights and is looking for a friend, which he finds in Mowgli.

While Bill Murray is an unexpected friend to the man-cub, Christopher Walken, who voices King Louie, the ape, is a far cry from the original animation.  Walken was a brilliant choice to bring this re-invented character to life.

Watching Mowgli interact with his jungle family throughout his travels is breathtaking.  He bows to the elephants to show respect and then rushes out to help a heard save their baby with ropes that Mowgli made from vines of the jungle.

Quite different from its predecessor from 1967, the digitally enhanced animals bring the jungle to life in a way not seen before in The Jungle Book.   What is strange, is that while newcomer Sethi is the only "live" actor, his acting is untrained.  Whether this is a genius choice by Director Jon Favreau (Iron Man) showing how a real boy would be in that situation, or a stumble with Sethi not being able to reconcile how he acts with his character, is a difficult call.    In addition, while Mowgli's conversations with the animals has a real feel to it, one wonders where this little man-cub learns the human sarcasm and mannerisms he has when he's been brought up by wolves, and not humans.

Our favorite songs are still present, even though the images and voices of our beloved characters have changed.  The quality of the Blu-ray in 1080p high definition only enhances the old story and turns it into new one.  Keep checking your face for the 3D glasses that aren't there- the image quality is absolutely breathtaking, and instead of images popping out of the screen, you will want to reach into the jungle and bring things out with you.

The jungle comes alive with the DTS-HD Master Audio 7.1.  The sound quality is amazing.  If you close your eyes, you really feel like you are in the middle of the mudslide and rushing water.  The music score rises and falls to complement the action in the scenes.

The extras on the Blu-ray are interesting for the adult viewers-  seeing how the filmmakers brought the story to life in the 21st Century, actor interviews, and showing how sequences were created, but for the younger individual, it leaves much to be desired.  Extras include: The Jungle Book Reimagined, I Am Mowgli, King Louie's Temple: Layer by Layer, and an Audio Commentary with director Jon Favreau.

The younger generation will love this new version, which is beautifully done, but as an adult,  it's just missing the fun-loving, funny acting that was present in the original animated movie.   Regardless, I was mesmerized by the depth perception and cinematography presented in this Blu-ray, probably like none other seen before, and even though it took a bit to get used to with the one lone live actor talking to the very real-lookingwith digital animations of animals, this is a still must have Blu-ray for the Disney connoisseur and all families around.

Purchase a DVD/Blu-ray/4K UHD physical copy of The Jungle Book today at Amazon.com

Download The Jungle Book in Digital HD/4K from the iTunes store.

Listen to the The Jungle Book soundtrack on Apple Music.

For more information about The Jungle Book visit the FlickDirect Movie Database. This release has been provided to FlickDirect for review purposes. For more reviews by Jennifer Broderick please click here.