Hellraiser: The Scarlet Box truly has such sights to show you, it will take weeks to get through it all! 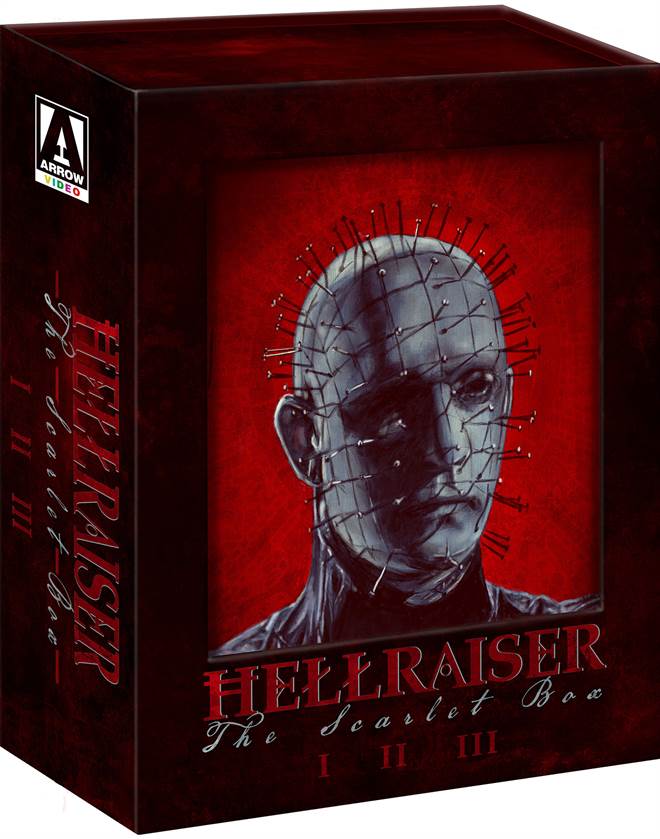 Purchase   DVD/Blu-ray/4K UHD
I'm not much of a gambling man but I'd take the safe bet and say that if you're reading this review, you're a Clive Barker/Hellraiser fan.  I will even go further and venture a guess, you're either debating the purchase of the Scarlet Box or you have already taken the plunge and you want to see what our thoughts are on the Hellish subject.

Well, let me say immediately, this boxed set will not disappoint!

The Scarlet Box arrives just in time to coincide with the release of the novella (1986), from which, the first Hellraiser film was adapted in 1987.  Barker took the plunge and to his credit, directed and wrote the screenplay for Hellraiser and did an admirable job, especially for a first-time filmmaker.

In the late 80's the horror scene was a bloated corpse, feeding upon its own tropes and Hellraiser was a seriously dark and dangerous movie. Barker understood the nature of true horror.  Even Stephen King himself knew that Barker was the real deal.

Touching upon forbidden subjects like sadomasochism, adultery, murder, fratricide, and incest (uncle Frank you nasty SOB), Hellraiser was a kick in the ass when it was released in 1987.  Even its sequels were hard-pressed to recapture the black-as-Hell, lightning in a bottle that the first film possessed. Especially the Cenobites, Angels or Demons, clad in blood and bile soaked leather and at their center, rising above the charnel pit, The Hell Priest himself, Pinhead.  There has never been another antagonist in a horror franchise, quite like him.  These movies became an instant hit with the die-hard horror crowds around the globe.  There's no denying the power of the first three films and Arrow has lived up to the challenge.

The three films, HELLRAISER, HELLBOUND and HELL ON EARTH are given new 2k makeovers from 35mm interpositive elements by Arrow and look better than ever on home release, but the restoration can appear grainy at times and at other moments, amazing.  There are a few moments in Hell on Earth, especially the "morphing" special effects, that possess a noticeable drop in clarity. All in all, the three films look fantastic and there's little to complain about here.

As for the sound restoration, HELLRAISER AND HELLBOUND get uncompressed PCM Stereo 2.0 and lossless DTS-HD MA 5.1 and HELL ON EARTH receives a DTS-HD MA 2.0.  Pinhead's reverberant bass is satisfying and the 5.1 mix adds a tad more depth, but otherwise the mix is unremarkable.

As for the extras, Arrow's four-disc Blu-ray box-set is a completists dream come true, furnished with lurid artwork, each disc comes with tons of extras: interviews with Clive Barker, Ashley Laurence and Doug Bradley, trailers, photo galleries and 'Damnation Games',  a 200 page hardback book: a lavishly illustrated exploration of Barker's short films and plays, the production of the first three Hellraiser films, and the development and appeal of the Cenobites themselves.

A fourth Blu-ray disc contains Barker's early experimental short films Salome and The Forbidden, with optional intros from the director as well as the original press kits for the three films and technical notes on the restorations.

Last, but far from least, in this spectacular boxed set are a poster of Pinhead and five art cards, which deserve to be framed and hung on the wall next to a vintage Hellraiser one sheet.

The Scarlet Box truly has such sights to show you, it will take weeks to get through it all!

For more information about Hellraiser visit the FlickDirect Movie Database. This release has been provided to FlickDirect for review purposes. For more reviews by Leonard Buccellato please click here.

Leonard Buccellato
For a fan of the Hellraiser series, all of the extras will have you drooling as each hook settles deeper into your flesh. It will leave you wanting more.
Full Review | Grade: A