If you’ve read the books and/or seen the movies you may decide to add this to your Blu-ray collection.  If you just want a simmering introduction to the Dominant/Submissive world then, by all means, watch both the first movie and this second installment. 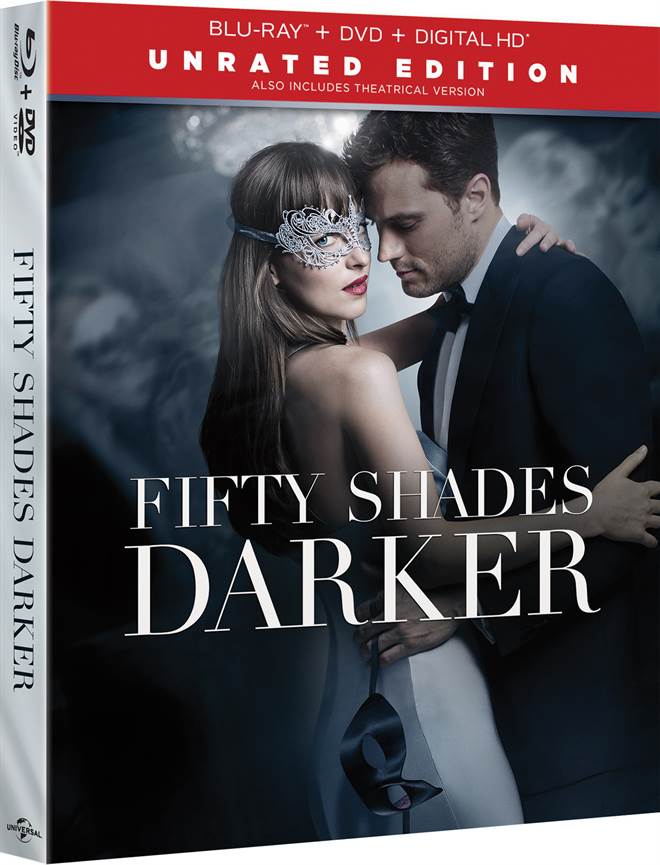 When we rejoin Christian Grey(Jamie Dornan; Once Upon a Time) and Anastasia Steele (Dakota Johnson; How to Be Single), weeks of montage worthy pining and soul searching have passed. After finding the courage to end their arrangement turned toxic relationship (in the first film's more empowering ending), Ana has forged a new Grey-less life replacing him with a new dominant.  Actually, this "new dominant" is her lustfully predatory boss Jack (Eric Johnson; The Knick) at the publishing house where she is now employed.

Jack Hyde is slick in the humanly slimy sense but completely transparent in his rushed, forceful "charm."  That's as much as needs to be said about him.

Ana, supporting her Photographer friend José (Victor Rasuk; Stalker), is shocked to find that larger than life photos of herself are part of the exhibition.  Lo and behold, José is informed that those precise six photographs have sold.  All have been purchased by the same individual.  Since we all know where this is going, we'll jump ahead to Ana accepting Christian's dinner invitation.  One could almost forgive what feels like weak, contrived dialogue when Anastasia pushes back insisting that they take their new "vanilla" relationship slowly. It's difficult, however, when she backtracks on any self-growth that might have been occurring.  Upon the completion of that boundary establishing dinner, they arrive in the bedroom rather rapidly.  (I suppose slow means not entering the pleasure dungeon on the first date.)

Of course, neither the films or books were ever intended to delve into unhealthy or toxic tendencies resulting from abusive relationships (of which there is plenty). Fifty Shades is intended to be pure sexual fantasy, and there is plenty of sexual fantasy offered up.  Considering the premise and subject matter, the sex scenes (or, 88%, possibly more, of the film) are fairly tame and reserved.  (Yes, that can be said of Ben Wa balls.)  Otherwise, short of actual penetration of any sort, sex, sex, sex is fairly prevalent and prominent.  Naturally, flesh plays as prominent (if not, more so) of a role in the film.  Save for the cosmetically covered body art, there might not be any dermal anonymity left to Dakota Johnson.

Luckily, a great deal of humor is infused throughout the film.  A gamble considering that it could have further diminished the sexual aspects rendering them utterly ridiculous.  Director James Foley (House of Cards; Glengarry Glen Ross) soars through the risk expertly instead highlighting some of the absurdities in the script thereby elevating the fantasy element to be more readily consumed. Since we're on humor, one of the funniest lines (to those of us who saw Working Girl) is uttered by Dakota Johnson in an homage to her mother, Melanie Griffith, as Tess in the aforementioned film.  Something about not fetching coffee unless her assistant is getting some for herself.

Having been exposed to the, er, darker shades of Christian's perverse past (including a suicidal submissive interpreted by Bella Heathcote, and his former dominant, Elena aka Kim Basinger), Ana opts to stick around.  Should you with this latest release, you'll find the original theatrical version along with the steamier unrated version which includes footage that could not be seen in theaters (over 13 minutes).  The Blu-ray exclusives include 30 plus minutes of "never before seen" bonus features including behind the scenes footage; director and cast interviews; AND a sneak peek of the next installment, Fifty Shades Freed.  Other extras provide a look at the costumes and production design involved in the masquerade ball scene, as well as, a provocative exploration of the Red Room and toys it beholds.  The Blu-ray will surely enhance the great soundtrack (and moaning) with an amazing DTS-HD 7.1 Master Audio.

If you've read the books and/or seen the movies you may decide to add this to your Blu-ray collection.  If you just want a simmering introduction to the Dominant/Submissive world then, by all means, watch both the first movie and this second installment.

For more information about Fifty Shades Darker visit the FlickDirect Movie Database. This release has been provided to FlickDirect for review purposes. For more reviews by Judith Raymer please click here.

Allison Rose
Fifty Shades Darker drags quite a bit and the sex can be uncomfortable to watch at times.
Full Review | Grade: C