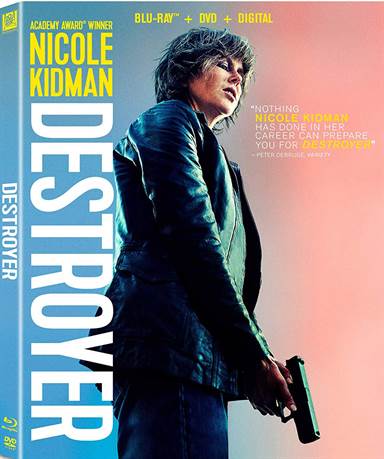 Purchase  DVD/Blu-ray/4K UHD
Academy Award winner Nicole Kidman (Cold Mountain) is such a versatile actor that one could imagine her playing almost any type of role.  She was Satine in Moulin Rouge! and English author Virginia Wolf in The Hours won an Oscar for her performance in the film.  Therefore it's no surprise that she fully engrosses her self in her latest role as LAPD Detective, Erin Bell for the 2018 movie, Destroyer.  Portraying a hardened police officer-worn down by time, circumstances and alcohol, Kidman is fairly unrecognizable and it is obvious that this is unlike any other role she has ever done in the past.

Bell was a young cop seventeen years ago when she was recruited to go undercover with a fellow officer, Chris (Sebastian Stan; Captain America: The Winter Soldier) to infiltrate a gang of drug users and bank robbers.  While pretending to be together the two fell in love and instead of turning in the gang, Erin convinces Chris to help with the robbery, pretend they lost touch with the gang, steal the money for themselves and after a year or two leave the force together. All of this is learned in flashbacks throughout the movie including the fact that Erin became pregnant with Chris' baby while they were undercover.

In the present day, it is seventeen years later and Erin, hungover, responses to a homicide case. After recognizing the deceased she tells the other detectives she knows who committed the murder and then walks away.  We then watch as Erin follows one lead to the next to find Silas (Toby Kebbell; Fantastic Four), the leader of the former gang who has supposedly resurfaced as he is running out of the stolen money.  We find out that Erin is trying to find Silas to exact revenge for Chris since Silas was the one who shot and killed him when the bank heist went bad.

Kidman is unbelievable in this role.  Not only is the makeup excellent but her demeanor, body language, and speech are incredibly unique and different from the polished and statuesque beauty we have seen on the red carpet.  She is so convincing as Bell that Kidman melts away and this whole other person emerges on the screen.  Stan is also very good but quiet, much like his Avengers' character.  Kebbell is also rather quiet but has an intense stare the eats through anyone.  Bradley Whitford (Get Out), Tatiana Maslany (Orphan Black), Scoot McNairy (12 Years A Slave) and Jade Pettyjohn (School of Rock) round out the cast nicely.

Director Karyn Kusama (The Invitation) makes interesting choices throughout the film.  The decision to intercut the present day with flashbacks was bold and could have confused the audience but Kusama makes it work well.  It adds a level of interest and keeps the audience engaged.  It is also intriguing how the script comes full circle and we end the film exactly where we started off.  The blended storytelling technique gives the movie more depth than it would have had if told in chronological order.

The 1080p video quality is excellent in this film and the bright sun of daytime is blinding while the deep blacks of the night are dark and true.  The details are crisp and sharp and there is no visible artifacting. The DTS-HD Master Audio 5.1 is a decent compliment to the video.  The dialogue sits comfortably in the center channel while the effects occupy the surround speakers.  The Blu-ray Disc houses the extras and includes: Commentaries with the Director and with the Writers, Gallery, and Breakdown of an Anti-Hero: The Making of Destroyer.

The story coupled with Kidman's stellar performance makes this a movie worth watching.  Interesting, intriguing and different, Destroyer has mystery, action and incredible acting.

Download Destroyer in Digital HD/4K from the iTunes store.

For more information about Destroyer visit the FlickDirect Movie Database.