The real treat of The Upside is finding a new side of Kevin Hart and the chemistry and the friendship he and Bryan Cranston share on screen. 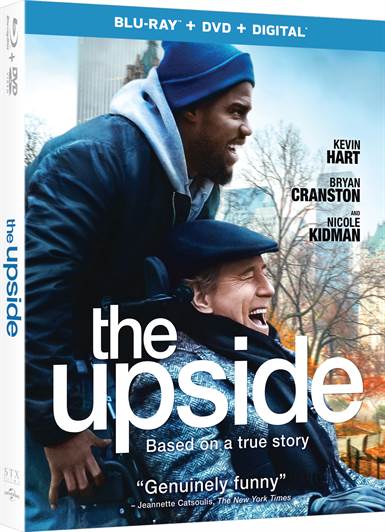 Purchase   DVD/Blu-ray/4K UHD
No matter how bad your life is… it could always be worse.  You could be terminally ill or homeless or, in the case of Philip Lacasse Bryan Cranston; Breaking Bad), become a paraplegic who need constant help to get out of bed, eat, and go to the bathroom.  Based on a true story and an adaptation of the 2011 French Film, The Untouchables, The Upside tells the story of Phillip's life after his accident and the unlikely friendship between him and ex-con Dell Scott (Kevin Hart; Night School). Released in theaters earlier this year, the movie is now available for purchase on Blu-ray, DVD and Digital HD.

Philip was a successful businessman, a self-made millionaire and an author who had a great life with his wife.  All that changed after a paragliding accident left him unable to move.  Then his wife passed away from cancer and he was left to find someone to be his caregiver 24/7.  Dell was an ex-con who didn't really want a job but had to at least look for one as part of his probation requirement.  When he shows up on Philip's doorstep, Philip hires him over more qualified candidates, much to the chagrin of his assistant, Yvonne (Nicole Kidman; Moulin Rouge!).

At first, things seem a little bumpy as Dell has no idea how to care for Philip and is reluctant to perform certain tasks.  Eventually, though they form a bond as each one exposes the other to various aspects of their lives including music, art, food, and relationships. Unfortunately, as often happens with most close friendships, things start to fall apart and Dell ends up leaving Philip[ who then ends up in a depression. But like most happy endings the two work out their issues, in the end, strengthening their bond.

The gem of this film is the actors.  Cranston is excellent as always as the even-keeled, proper Lacasse and he has great chemistry with onscreen partner Hart.  Hart is the real surprise here because, while there are some comedic moments, the film really shows another side to Hart - a more dramatic one which he portrays with aplomb.  Kidman rounds out this trio nicely as the stiff and proper assistant.  While all three deliver solid performances, it is Hart who is truly the standout and who makes the audience look at him in a whole new light.

The Blu-ray is presented 1080p video quality with an aspect ratio of 1.85:1 making the picture quality decent but not exceptional.  Lines are sharp, colors are bright for the most part and there is no graininess to speak of but nothing truly stands out.  The DTS-HD master audio 5.1, on the other hand, is excellent, especially where the soundtrack is concerned.  The dialogue is clean and crisp but the music, especially the operatic sections shine on this release.  The Blu-ray combo pack offers little in the way of extras though.  Besides deleted scenes and a three-minute gag reel, the other features are all mini-trailers for the movie with the occasional interview clip thrown in for good measure.

While the scripts a "by the numbers, feel good" film the cast really makes it more than the sum of its parts.  Cranston offers a range of emotions that we can always expect and Kidman plays a slightly different role as a more button-upped, intellectual type rather than a glamorous movies star.  The real treat is finding a new side of Hart and the chemistry and the friendship the two share on screen.

Purchase a DVD/Blu-ray/4K UHD physical copy of The Upside today at Amazon.com

For more information about The Upside visit the FlickDirect Movie Database. This release has been provided to FlickDirect for review purposes. For more reviews by Allison Rose please click here.

The Upside images are © STX Entertainment. All Rights Reserved.