MVD’s release of Double Impact is simply amazing. If anyone is a Van Damme fan or lived with these types of films in the 90s, this is a must buy just for the special features alone. 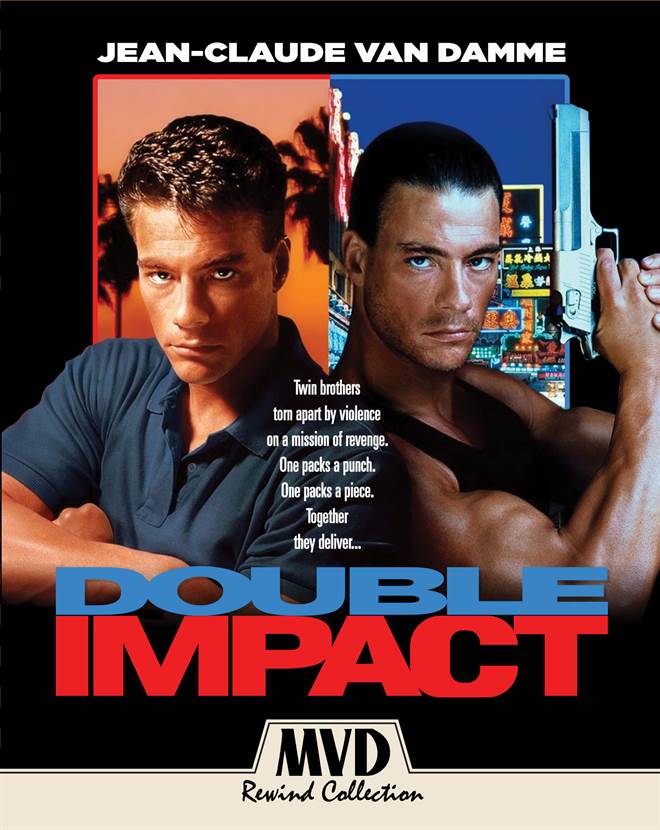 Purchase   DVD/Blu-ray/4K UHD
Jean-Claude Van Damme (Bloodsport) was one of the top action stars of the late 1980s and early 1990s, starring in almost a dozen films in that time period alone. In 1991, he starred in Double Impact. An initial release of this title was done by Fox/MGM back in 2012, however, this release really didn't do justice for true die-hard Van Damme fans. This May MVD rectified that and released what will probably be the end-all-be-all edition for the ages as part of their Rewind Collection.

Jean-Claude Van Damme stars in a dual role as the twins Alex and Chad Wagner. As infants, their parents are killed by the Triads while on a business in Hong Kong. The twins are both spared and wound up being raised in different countries - Alex in Hong Kong and Chad in France.  Eventually, ex-bodyguard, Frank Avery (Geoffrey Lewis), who raised Chad, tells him that they have a business in Hong Kong they need to attend to (they co-own a successful martial arts business in LA). Once there, Frank reveals the secret that Chad has a twin and the new business is really for the two to meet and join forces in order to take down those responsible for their parents' death.

Having the same director as Lionheart (Sheldon Lettich), and using the same screenwriters from Lionheart and Bloodsport, Double Impact completes a trilogy of some of Jean-Claude's best work.  While Double Impact is considered a B-movie it should not deter anyone from seeing this film. Jean-Claude's acting is spot on, the action sequences really give other films released at the same time a run for their money, and the special effects (for that time period) of Jean-Claude as a twin really are great for its budget and time period. The supporting cast including Geoffrey Lewis (The Lawnmower Man), Alonna Shaw (Kings of New York), Corinna Everson (Hercules: The Legendary Journeys) do their best, but there acting seems extremely stiff compared to Jean-Claude's.

While the original release of Double Impact had adequate video and audio for a "catalog" release title, you can tell not much care went into creating the release. However, it appears, that  MVD went back to the original negative to deliver the new release that is presented in its original aspect ratio of 1.85:1 in 1080p AVC. The colors are vivid and the film looks much less dark and dull as it had in previous iterations of the movie (Blu-ray, DVD, VHS, and theatrical release). Hong Kong truly comes alive in this version showing all the splendor that is there. The audio has also been upgraded to LPCM 2.0. While it isn't surrounded - unfortunately, it was not filmed in it because of its budget - the PCM soundtrack is cleaner and more pristine than the earlier release.

The original Blu-ray release of Double Impact by Fox/MGM was very bare bones release with only a trailer and the film. However, the team at MVD went out of their way to make the most comprehensive look at the making of Double Impact that will probably ever be made. This release includes a plethora of special features including a two-part feature-length documentary about the making of the film (with interviews with the cast that are from last year), lots of deleted scenes and extended scenes, as well as an alternate ending. Fans will also enjoy some behind the scenes featurettes, an in-depth look at the film's main chase scene, archival materials and even a mini movie poster from the film.

MVD's release of Double Impact is simply amazing. If anyone is a Van Damme fan or lived with these types of films in the 90s, this is a must buy just for the special features alone. One can only hope MVD can tackle Bloodsport next.

For more information about Double Impact visit the FlickDirect Movie Database. This release has been provided to FlickDirect for review purposes. For more reviews by Nathan M Rose please click here.