Hoult does a fine job portraying the troubled young man who would later become an incredible author. He comes across as intelligent, passionate and compassionate. 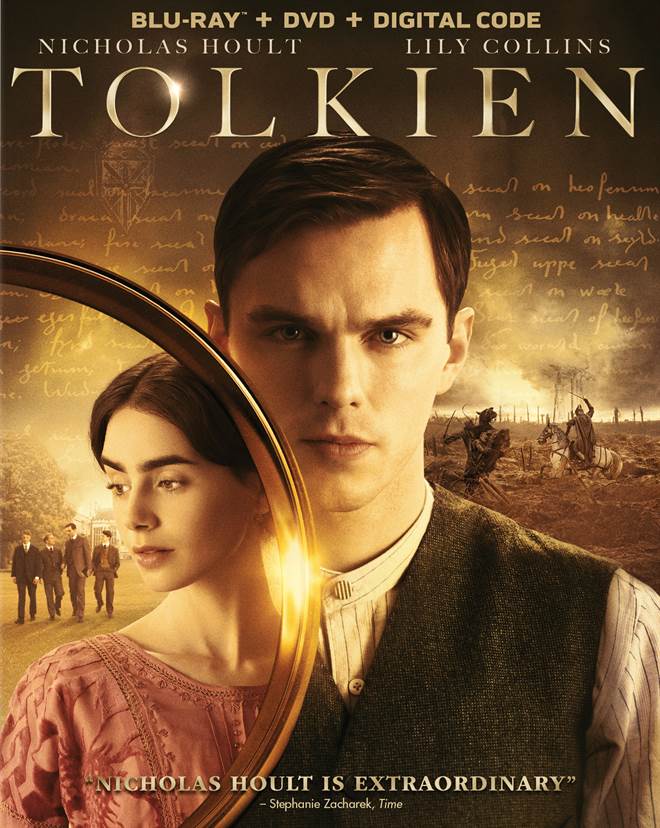 Imagine what literature would have been like if J.R.R. Tolkien had had a different childhood?  Imagine what if the creative mind that was his had not had the experiences he was exposed to in his early life?  Would we have gotten Middle Earth? Arda? Made up languages?  Luckily, we will never have to find out as the influences that shaped young Tolkien's life inspired his creative drive to write The Hobbit and The Lord of The Rings.  However, as we have focused so much on his works in film, no one has ever looked in-depth into the man himself.  That is until now.  In May, Tolkien was released in theaters and this month it made its way to retailers on Blu-ray, DVD, and Digital.

John Ronald Reuel Tolkien (Nicholas Hoult; X-Men: Days of Future Past) was born in South Africa but after his father died, he, his mother and younger brother lived in England where the boys were brought up Roman Catholic.  His mother died when he was twelve leaving the Tolkien boys orphans and in the care of Father Francis (Colm Meaney; Con Air).  Tolkien lived in a boarding house and attended King Edward's School,  It was there he met his closest friends, Rob Gilson (Patrick Gibson; Guerrilla), Geoffrey Smith (Anthony Boyle; The Lost City of Z) and Christopher Wiseman (Tom Glynn-Carney; Dunkirk).

The four young men created the T. C. B. S. (Tea Club and Barrovian Society) and they would sit around for hours drinking tea and discussing their plans, goals, passions, etc.  It was with them that Tolkien decided to dedicate his studies to writing poetry. However, after finishing his studies he and his friends were called upon to fight in World War I.  While Tolkien ended up returning to England with Trench Fever, both Rob Gilson and Geoffrey Smith were killed in battle.  Before leaving for France, Tolkien married his sweetheart from the boarding house, Edith Bratt (Lily Collins; Love, Rosie) and the two were together until her death in 1971.

Hoult does a fine job portraying the troubled young man who would later become an incredible author.  He comes across as intelligent, passionate and compassionate despite having faced many hardships in life.  Collins is an excellent complement and the dainty yet spirited Edith.  Gibson, Boyle, and Glynn-Carney are well cast as well and the four men have an apparent bond that makes their relationship seem real.  Unfortunately, the film with this cast could have been something magical if it wasn't for the lackluster script.

The Blu-ray is presented in 1080p high definition video and the quality of the picture reflects that well.  Even in the dreary scenes, there are moments of colors popping on the screen, which are represented nicely in deep, rich tones. The DTS-HD Master Audio 5.1 is solid with much of the "pop" coming during the battlefront scenes.  Disappointingly, there are very few extras included in this combo back.  They are: Deleted Scenes, First Look, Audio Commentary by Dome Karukoski, and a photo gallery.  I wish there had been more about the author himself and perhaps more "behind the scenes" features.

As biopics go, this one could have had so much more depth and insight but instead tried too hard to be an offshoot of a "Dead Poet's Society" without much of the passion and drama present in that film.  While the film offers some insight into what perhaps shaped the brilliant literary mind of Tolkien, it does so in bits and pieces that don't add up to a whole piece when sewn together.

Good acting and interesting visuals, unfortunately, couldn't save this movie from a mere mediocre outcome.

For more information about Tolkien visit the FlickDirect Movie Database. This release has been provided to FlickDirect for review purposes. For more reviews by Allison Rose please click here.

Alyn Darnay
We’re so used to the glitz and promotion of epic effects-laden productions these days, that it’s easy to miss a small well made and enjoyable film like this. It deserves to be seen, don’t miss it.
Full Review | Grade: B