Filmmakers Josh and Benny Safdie bought a quality product to audiences this past year and Sandler shines and the wholly unlikeable Ratner, but the film has flaws. 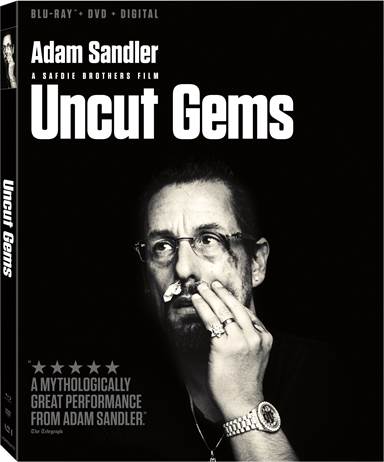 There are all kinds of people in this world… rich people, poor people, good people, religious people, selfish people, altruistic people, and downright douchebags.  You know the type.  The kind of person who uses anyone and everyone to get what they want and doesn't care who they step on along the way.  Howard Ratner (Adam Sandler; The Wedding Singer) is exactly that kind of guy.  A New York, Jewish jeweler who owes a ton of money to a loan shark looking to collect. Ratner scams and schemes his way through New York in the award-winning film, Uncut Gems.

Ratner is in over his head, and I suspect it's not for the first time.  He owes money to a loan shark and instead of paying him back Ratner bets more hoping to score the big win.  He also received a shipment including uncut gems from an African mine that he plans to auction off.  However, he makes the mistake of showing it to Basketball star, Kevin Garnett who temporarily trades his championship ring for the rock.  Ratner immediately pawns the ring to get money to place a bet on Garnett intending to buy the ring back with some of the winnings of his bet.

However, Garnett doesn't want to return the stone believing it is his good luck charm and it turns out Ratner's loan shark took the money from the bookie so Ratner has no money to buy the ring back.  Things get worse from there.  Ratner and his girlfriend break up, his wife hates him, the uncut gems only appraise at auction for less than $200,000 when he thought it would be at least a million, etc.  Every time Ratner seems to get a break something else bad happens.  It isn't like Ratner doesn't deserve it though.  However, just as he is on the verge of losing it all, Ratner wins big but sadly never gets the chance to truly enjoy it.

I tend to like Sandler in his more serious roles, though many of those characters seem to have a good guy, romantic slant to them.  While Sandler is excellent in this film, I find nothing redeemable about Ratner and, much like Pacino's Tony Montana in Scarface, I can't root for him.   Every move he makes aggravates me and whenever he opens his mouth I cringe. Of course, I think he got what he deserved in the end.  His lovely ladies, Julia De Fiore (Julia Fox in her feature film debut) and Dinah Ratner (Idina Menzel; Frozen),  are both terrific and compliment him perfectly.

The Blu-ray is presented with the standard 1080p resolution and a 2.39:1 aspect ratio.  While the details are crisp, at some points the film has an overall underlying grittiness/graininess to it to give the feeling of a somewhat "underworld" of New York City, Jewelers and loan sharks.  The DST-HD Master Audio 5.1  is excellent and really shows off the eclectic soundtrack.  The dialogue is sharp while the ambient noise isn't particularly overpowering.  The combo pack offers the Digital HD and a DVD along with the Blu- ray disc but the only "true" extra is called "Money on the Street: The Making of Uncut Gems.

Filmmakers Josh and Benny Safdie bought a quality product to audiences this past year and Sandler shines and the wholly unlikeable Ratner, but the film has flaws.  The story has several moving parts and none of them seem to make up one cohesive unit and Ratner is not a character one can sympathize with or empathize with so I found him annoying and pitiful rather than the charismatic charmer the Safdie brothers wanted him to be.  The story is decent and Sandler does a great job, but I just didn't care what happened to the central character and that is the big problem.

Download Uncut Gems in Digital HD/4K from the iTunes store.

Listen to the Uncut Gems soundtrack on Apple Music.