DeMille was among the best and these movies are classics. 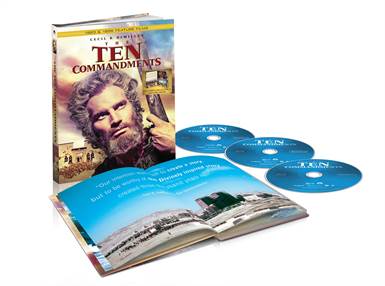 Cecil B. DeMille is known as a founding father of American film and the most commercially successful producer-director in all of film history.  He made seventy feature films both silent and with sound and he will never be forgotten.  Some of his features are still shown today and probably his most famous is the 1956 version of The Ten Commandments. Because of this, Paramount Pictures has decided to put together a Blu-ray Digipack including both DeMille's 1923 silent version of The Ten Commandments and the 1956 Charlton Heston (Ben-Hur) / Yul Brynner (The King and I) version.  Together they make an excellent addition to any home entertainment library.

The 1923 silent film is rather interesting.  Having only been previously familiar with the 1956 film, I wasn't sure what to expect and the movie starts similarly to the 1956 version but after about 40 minutes the movie changes to a more modern story of a mother and her two grown sons Dan (Rod La Rocque; International Crime) and John (Richard Dix; Devil's Playground) McTavish.  While John, like his mother, follows the bible and the commandments, Dan thinks they are all "bunk" – a sentiment that upsets and angers his mother.  Years later Dan has made a fortune "cheating" in business and has a mistress that has a contagious and fatal disease.  Unfortunately, his time not living by the commandments has caught up with him and he is now wanted by the police.  Meanwhile, John has not had the same success as Dan but has a good life living by what the bible says.

The 1956 version is the retelling of the story of the Jews slavery in Egypt, the ten plagues, Pharaoh allowing the Jews to leave, then changing his mind and pursuing them.  The splitting of the sea, Moses on Mount Sinai getting the commandments and, upon his return, finding the Jewish people praying to golden idols.  Heston and Bynner are iconic in their respective roles of Moses and the Pharaoh. And the film is one I watch every spring growing up.

Since The Ten Commandments Blu-ray has been previously released, the video and audio are the same.  The color on the 1080p resolution disc is exceptional and the DTS-HD Master Audio 5.1 is pretty good considering the frame in which the movie was filmed.  The Dolby Digital 2.0 on the '23 version showcases the music well and, for 1923, the graphics are pretty decent.  The extras also have been previously released other than an audio commentary of the 1923 version by Katherine Orrison.  For a list of extras, please see below.

The biggest attraction to this digipack is the book that is affixed to the center binding. There are sixteen glossy pages with rare photos and some basic text.  It offers some interesting pictures and information but I think it probably could have gone more in-depth which would have been appealing.

There is no doubt that Cecil B. DeMille was a master of filmmaking and even though there is a contrast between these two versions, they both draw the audience in, flow smoothly (you don't even realize the '56 version is over 3 hours long) and generally entertain.

Even if you own an earlier release of the Blu-ray, I suggest you buy this digipack as it comes in a bound bookcase, has the 16-page insert, the 1923 silent film version, and Orrison's commentary.

DeMille was among the best and these movies are classics.  Go out and Get the Ten Commandments Blu-ray Digipack today.  You won't regret it!

Purchase a DVD/Blu-ray/4K UHD physical copy of The Ten Commandments today at Amazon.com

Download The Ten Commandments in Digital HD/4K from the iTunes store.

For more information about The Ten Commandments visit the FlickDirect Movie Database. This release has been provided to FlickDirect for review purposes. For more reviews by Allison Rose please click here.