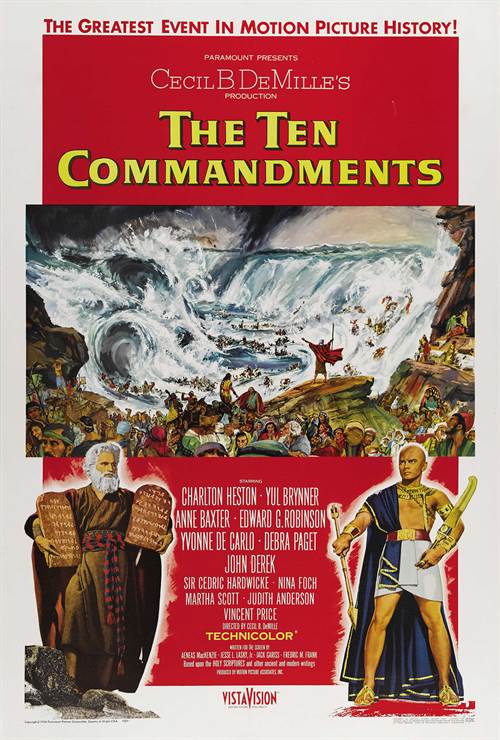 For sheer pageantry and spectacle, few motion pictures can claim to equal the splendor of Cecil B. DeMille’s 1956 remake of his epic “The Ten Commandments”. Filmed in Egypt and the Sinai with one of the biggest sets ever constructed for a motion picture, this version tells the story of the life of Moses (Charlton Heston), once favoured in the Pharaoh’s (Yul Brynner) household, who turned his back on a privileged life to lead his people to freedom.

Stream The Ten Commandments in Digital HD/4K from the AppleTV store.


Enter To Win DeMille's classics, THE TEN COMMANDMENTS ('23 and '...  3/9/2020 4:33 PM EST
There is no arguing that Cecil B. DeMille was one of the greatest directors of his time. His films such as The Greatest Show On Earth and Sunset Boulevard are classics but perhaps he is best known for, not one but, two versions of THE TEN COMMANDMENTS. Just in time for the spring holiday season a special Blu-ray Digipack of these two films is being released on March 10, 2020.  FlickDirect, in conj...  More>> 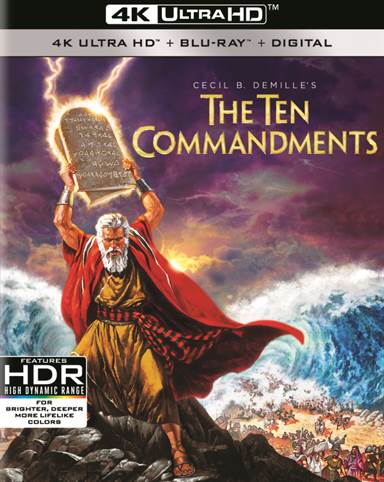 How often does a filmmaker get to completely remake one of their films thirty-three years after the original version came out?  The answer is never.  If a remake is planned, it generally includes a new, updated version of the original film with a different director and soundtrack (to utilize more modern songs) in hopes of appealing to younger audiences.

However, there has been one director who was able to do it – Cecil B. DeMille.  In 1923, he created a silent film as a visual representation of the biblical story of The Ten Commandments.  Then in 1956, after "talkies" were invented, he was able to remake the movie, not only with sound but color pictures as well.  That second version is now being released from Paramount Pictures for the first time in 4K/Dolby Vision.

I can remember every Spring sitting down in front of the television during Easter/Passover season and watching the movie as it aired on national television.  With commercial breaks the movie lasted around four hours and, even though I had seen it the year before, I still watched it once again.  I don't know if it still airs on television (with so many channels now, it has to be airing on ONE of them!) but no need to worry as we are able to own it with the best possible digital quality available.

Everyone should be familiar with the story of Moses (Charlton Heston; Ben-Hur) and how, after being placed in a basket and sent upriver, he was found by Bithiah (Nina Foch; Spartacus) who adopts him.  Living and learning in the Pharoah's Palace, Moses grows up to be a champion for the Hebrew Slaves, who eventually has them freed, as the Pharoah Ramesses II (Yul Brynner; The King and I) fears for his son's life.  The film goes on to show the Hebrews following Moses into the desert, Ramesses II following, Moses parting the Red Sea and delivering the Ten Commandments to the Hebrews.

Touted as the greatest epic of all time, the film was nominated for seven Academy Awards including Best Picture.  At the time of its release, it was the most expensive film ever made but it also became the highest-grossing movie of 1956 and the second highest-grossing of the decade.  It was also DeMille's last and most successful film.  As it hits its sixty-fifth anniversary, it is once again being celebrated and has been given a true "makeover".

To explain the painstaking process taken to upgrade this film, Paramount explained:

As part of the restoration done in 2010, the film was scanned in 6K and those files were the basis for this brand-new Dolby Vision version, which shows off the full beauty of the original VistaVision negative. The VistaVision format used special cameras to feed 35mm film into the camera horizontally in order to capture a wider image spread over two 35mm film frames, giving VistaVision twice the resolution of regular 35mm film. In addition, Paramount spent well over 150 hours doing new colorwork and clean-up on the scan.

The work done was obviously worth it as the movie is so sharp and the colors are vibrant throughout.  Interestingly, the audio track did not receive an upgrade as well and is present in DTS-HD Master Audio 5.1 lossless soundtrack.  There are no new extras released with this version and actually omits previously released extras including a disc with the 1923 version of the film.  This Combo pack has three discs: the 4k disc, the Blu-ray discs (broken into 2 parts with some special features on each disc), as well as the Digital HD code.

The Ten Commandments will remain a cherished movie memory from my childhood and seeing it in all its upgraded glory is a special treat. It is definitely a collector's item that every film buff should own.