The Rhythm Section tries its best to be a suspenseful, action-packed thriller. 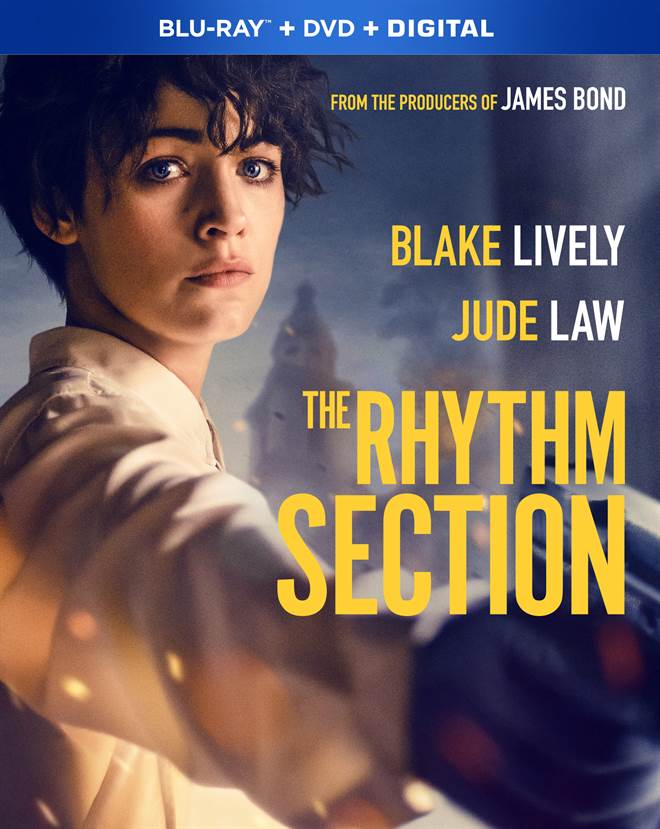 The rhythm section is the heart of any band.  The drums are the heartbeat that keeps the tempo for the rest of the instruments.  It is the same with the human body.  The heartbeat can be very fast when a person is angry or agitated or slow and smooth when feeling a sense of calm and serenity. For a trained gunman, the goal is to achieve the latter in an effort to make their aim straight and less erratic.  Assassins, snipers, etc. learn this skill early in their careers to help them become expert marksmen.  The Rhythm Section is also the name of the 2020 film that is set to be released on Blu-ray this week.

From the name alone one might expect a big band era drama or a high school marching band comedy.  You'd be wrong on either account.  Starring Blake Lively (Gossip Girls), Jude Law (The Talented Mr. Ripley), and Sterling K. Brown (This Is Us), it is a spy drama dealing with terrorists where if you make one wrong move, it may be your last. Directed by Reed Morano (I Think We're Alone Now), The Rhythm Section tries its best to be a suspenseful, action-packed thriller.

Stephanie Parker (Lively) should have been on that plane three years ago. She should have died in the crash that killed her parents, her brother, and her sister.  She should have but she wasn't on the plane and didn't die.  Instead, she became a drug addict and a prostitute.  Then, one day, a journalist named Keith Proctor (Raza Jaffrey; Homeland) tells her the plane crash was really a terrorist attack, not the accident she was led to believe it was. He tells her the bomb was made by a man named Reza (Tawfeek Barhom; The Looming Tower), so she tracks him down to kill him but doesn't.  Later that day she finds Proctor dead knowing she unintentionally had a hand in his death.

Stephanie then seeks out a former MI-6 agent know as B (Law) who trains her to not only kill Reza but the mastermind behind the bombing, an unknown entity called U-17.  She learns hand to hand combat and how to slow her breathing/heartbeat before she shoots her target.  It is then she assumes the role of a missing agent named Petra Reuter and travels to Madrid to meet with a former spy named Serra (Brown).  He puts her in contact with all the players in the bombing and one by one she and B take them down until they are all dead.

Being released on Blu-ray, The Rhythm Section has an excellent video quality to it. The 1080p resolution has wonderful clarity and the colors are bright when Stephanie travels abroad yet greyish and dreary while she trains with B in Scotland.  The Dolby TrueHD 7.1 audio adds nicely to the overall viewing experience with ambient sounds playing subtly in the background and gunfire exploding in your ears.  The dialogue is a little low in comparison to the effects but still manageable.  There are 40 minutes of extras on the Blu-ray including: Deleted And Extended Scenes, Stephanie's Journey, Fight Or Flight, Never Leave Second Gear, One-Shot Explosion, and Designing The Rhythm Section.  All of them offer some insight into the film but the most interesting one for me was the behind the scenes look at exploding a bus.

With Lively, Law, and Brown leading the cast, one would expect an exciting film punctuated with dramatic scenes.  Unfortunately, that isn't the case here.  I'm not sure Lively was the right choice for this leading role but Law was well cast.  There were also times when I didn't necessarily understand where Stephanie/Petra was headed or why.  I had hoped for more but based on theatrical reviews from my colleagues, expected what I got.

For more information about The Rhythm Section visit the FlickDirect Movie Database. This release has been provided to FlickDirect for review purposes. For more reviews by Allison Rose please click here.

The Rhythm Section images are © Paramount Pictures. All Rights Reserved.