Holmes was a good choice to portray Miranda because she offered a softness to the character while hiding an inner strength that Miranda needed. 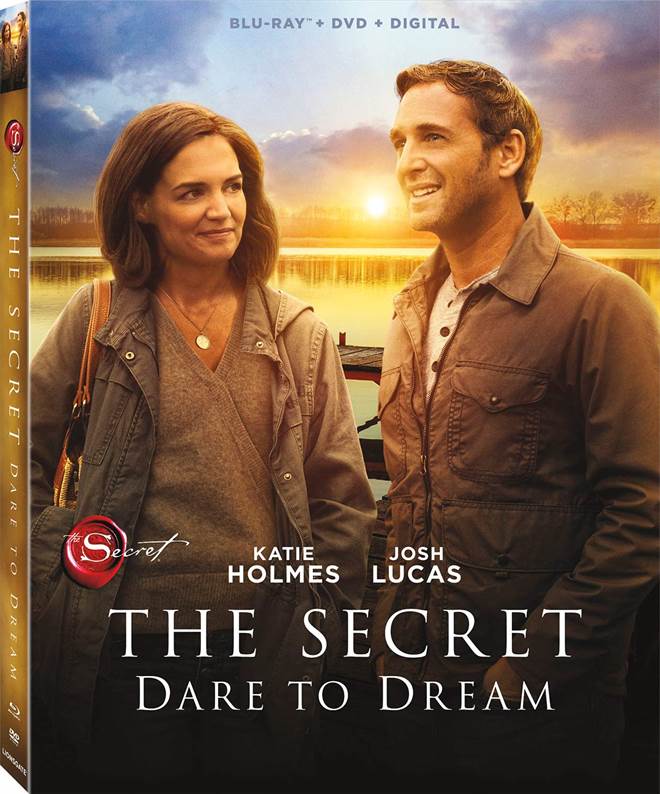 "The Secret".  What is it?  Some would say it's all a bunch of mumbo jumbo while others believe it is almost a religion of some sort.  It centers on the "law of attraction" or the idea of "positive thinking".  Basically, if you think of all the good things you want to have happen in your life, they will, and that our thoughts can change what happens to us.  The 2006 self-help book of the same name (written by Rhonda Byrne) is based on a documentary that follows the principles of Wallace Wattles' book, The Science of Getting Rich, published in 1910.  This summer, The Secret: Dare to Dream movie was released on demand and in theaters internationally.

Miranda Wells (Katie Holmes; Dawson's Creek) is a widowed mother of three who lives in a small town outside New Orleans.  She is dating her boss, Tucker (Jerry O'Connell; Stand By Me) but isn't in love with him, despite the fact that he adores her and would do anything for her and her kids.  Her house is in need of repairs and, despite a mounting pile of bills, she just can't seem to sell it.

Bray Johnson (Josh Lucas; Sweet Home Alabama) comes to town to deliver an envelope to Miranda but finds she isn't home.  Ironically, as he is leaving town, he gets into a fender bender with a stranger whose bumper he offers to fix (even though she hit his car).  Turns out this stranger is none other than Miranda Wells (obviously, they had never met before).  Bray fixes her bumper and for some reason decides not to give her the envelope he came to deliver.  Over the next few days, Miranda and her kids become friendly with Bray after he offers to fix her roof when a tree fell through it after a hurricane.  Along the way, he offers little "nuggets" of wisdom based on the principles behind "The Secret" becoming a good friend until the truth is revealed.

Holmes was a good choice to portray Miranda because she offered a softness to the character while hiding an inner strength that Miranda needed.  Lucas, of course, played the good looking, helpful stranger.  I say of course because we have seen him in this type of role before.  O'Connell gave off an air of "aww shucks" naivete that was neither believable nor interesting.  The young cast was very good and Celia Weston (Knight and Day) stole many of her scenes playing Miranda's mother in law.

The good part of this Blu-ray combo pack is the 1080p video resolution with a 2.39:1 aspect ratio.  The quality really highlights the visuals of this little Louisiana town.  The DTS-HD Master Audio 5.1 is a decent compliment to the video but doesn't match the clarity of the images.  Unfortunately, there is only one extra (besides the Digital HD code) called The Secret on Set, which offers very little in the way of actual information about making the movie or character development.

The biggest problem here though is that Holmes doesn't have any chemistry with either Lucas or O'Connell, so the "romance" falls flat.  Add in the "cheesy" life lessons Lucas regurgitates based on the concepts of The Secret and you have the makings of a groan-worthy film.  Don't get me wrong…I love a good romantic movie where the guy gets the girl in the end, but this is just not it.

I'm not sure whose idea it was to greenlight this movie but maybe they should have gone back and read the book again before making that decision.  I've seen worse films, believe me, but I've also seen much better.

For more information about The Secret: Dare to Dream visit the FlickDirect Movie Database. This release has been provided to FlickDirect for review purposes. For more reviews by Allison Rose please click here.

The Secret: Dare to Dream images are © Lionsgate. All Rights Reserved.