With director Jan de Bont (Twister) at the helm of this terror filled tale, there were no doubts it was going to be a wild and interesting ride. 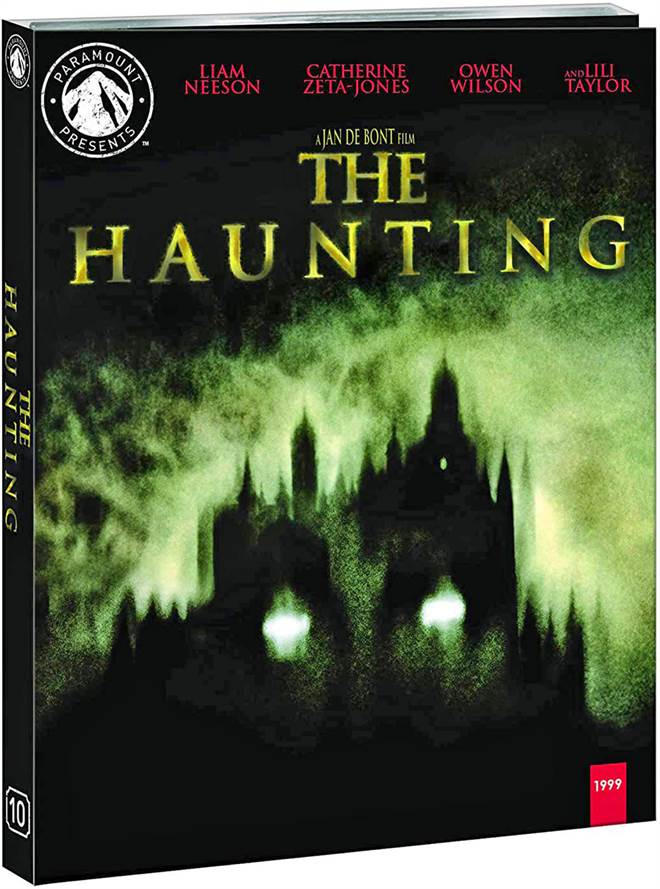 While Shirley Jackson (The Lottery) may have lacked quantity in her writing, she certainly made up for it in quality.  Regarded as a prolific author, she created images that terrified her readers while conversely drawing them into her made-up worlds.  In 1959 Viking published Jackson's novel, The Haunting of Hill House, which is considered to be one of the best ghost stories written in the twentieth century.  The book has been adapted into a Netflix television series, a play, and two feature films.  Both films were titled The Haunting with the first a British 1963 movie and the second a more modern, 1999 Americanized version.  The latter is out on Blu-ray and Digital today as the tenth movie in the Paramount Presents collection.

Eleanor "Nell" (Lili Taylor; Mystic Pizza) is an insomniac who has taken care of her invalid mother until her mother's passing a few months earlier.  When Nell's sister and brother-in-law plan to sell their mother's apartment, Nell faces homelessness with no money and not much in the way of skills.  When Nell finds a study, paying $900, that is looking for individuals with sleeping problems she puts herself in for consideration and is selected to participate.

She arrives first at Hill House and has a look around the ornate mansion before she is introduced to the other participants, Theodora "Theo" (Catherine Zeta-Jones; Chicago), and Luke (Owen Wilson; Wedding Crashers) as well as the Professor conducting the study, Dr. David Marrow (Liam Neeson; Taken).  As the guests settle in, strange noises and events begin in the house.  Over the next few nights, the occurrences become stranger and more dangerous with Nell becoming the focus of the house's attention.  Unsure if she is going insane or if the visions are real, Nell investigates the origins of the house and its occupants.  Upon learning the awful truth, Nell looks to "free" the souls of those who perished in Hill House which ends up costing Nell her own life.

With director Jan de Bont (Twister) at the helm of this terror-filled tale, there were no doubts it was going to be a wild and interesting ride.  Adding in a cast made up of talented and well-known actors, the movie had all the makings of a blockbuster.  Neeson lends credibility to the role of scientific researcher and Zeta-Jones play the part of a trendy, bisexual New Yorker with flair and style.  Wilson is good as a fellow insomniac, but it is Taylor who does most of the "heavy lifting" in the movie and is well cast as the sheltered and slightly unbalanced Nell.

The transfer of the movie from a 4K restoration is one of the few gems of this release. The intricate details of the ornate house are clean and sharp which is important as the house plays a big role in the film and is definitely a character unto itself.  The Dolby TrueHD audio is a mixed bag.  On the one hand, the effects are crisp with layers of sound, but the mix is off-balance, so I was constantly adjusting the volume between the dialogue and sound effects.  The extras aren't anything special but include: Filmmaker Focus: Director Jan de Bont on The Haunting, Behind-the-Scenes Featurette, Theatrical Teaser Trailer, and Theatrical Trailer.

Unfortunately, this remake of The Haunting, while technically beautiful, doesn't offer much unless you lower your expectations when watching it.  The script leaves a lot to be desired and the special effects are not well done at all, which almost turns this horror/thriller into more of an unintentional comedy. It's all a little disappointing because between de Bont, Neeson, Zeta-Jones, Wilson, and Taylor, there were the makings of a potential blockbuster, but this movie doesn't live up to expectations.  It's a shame because the other offerings in the Paramount Presents Collection tend to be classics/wonderful films and The Haunting just can't measure up to those other films.

For more information about The Haunting visit the FlickDirect Movie Database. This release has been provided to FlickDirect for review purposes. For more reviews by Allison Rose please click here.

The Haunting images are © Paramount Pictures. All Rights Reserved.