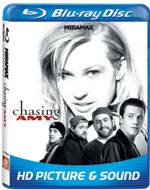 Purchase   DVD/Blu-ray/4K UHD
Being a 1997 movie, I am going to assume it is past its expiration date and speak about what I thought of it and discuss the plot.
If you are not familiar with Kevin Smith's work or Chasing Amy, in particular you should know that Kevin Smith directs movies set in a "View Askew-verse". View Askew is his production company that features an alternate version of New Jersey -- populated by colorful comic-obsessed slackers and comic artists. Two characters, Jay and Silent Bob, tie each of the Askew-verse movies together providing the presence of Kevin himself as Silent Bob, and there is a colorful commentary by Jay (Jason Mewes).

The movies are vulgar, geeky, and have a strong cult following.  Out of all of Kevin's movies, Chasing Amy is usually considered one of the best following his break out of Clerks which he famously shot for $27,000, and grossed a lot more.  Smith is a talented movie maker who writes, directs, and acts in each of his films and wisely plays the part of 'Silent' Bob instead of a messianic writer as M. Night Shyalman did in The Lady in the Water.

That said I historically haven't especially liked his films in spite of being a comic fan. His films support independent, off-beat, film-making, and although appreciating clever dialog, Kevin Smith has never fully captured me as a fan.  I was told that I really had to see Chasing Amy though since it was Quentin Tarantino's favorite movie of 1997; so I figured I would give it a chance.

Chasing Amy is about a pair of comic artists (Ben Affleck and Jason Lee) who have a successful property in a comic called Bluntman and Chronic. It is about a marijuana-themed Batman and Robin; the characters are based on Jay and Silent Bob, who get royalty payments.  When Affleck meets fellow comic/artist Alyssa Jones (Joey Lauren Adams -- Kevin Smith's then girlfriend), he falls in love with her at first sight. However, he finds out that she is a lesbian.  Then he really falls in love, and the romance is fraught with trouble. The question is will she decide to go-straight for Affleck?  As the romance seems to cause conflict between Affleck and Lee, will it break up their friendship?  If Ben can get anywhere with Adams, can it…actually work?

The movie turns on Kevin Smith's signature dialog.  He is a recognizable writer in the way Joss Wheedon and Quentin Tarantino are.  The movie is filled with comic book references -- the guys are clearly Matt Wagner fans -- which means Kevin Smith is; and it gives you a look at a world that Smith definitely loves and delivers for his fans that will almost definitional love it too. The general consensus is that Chasing Amy has heart, is a well-wrought film, and is noteworthy beyond the world of Kevin Smith fandom.

I agree with that consensus, but I still didn't like it. Since I am going into spoiler territory, let me get the Blu-Ray review out of the way first.

Kevin Smith films are not "big movies". There are no special effects and no action.  The Blu-Ray is a good print, but I do not feel that the movie is especially improved for it.  On the other hand, the team has gone all out with commentary, Q&A, and deleted scenes.  Of particular interest is a taped panel with the actors 10-years-later, and they are taking questions from a large audience.  Also noteworthy is a conversation between Kevin Smith and Joey Adams who were sleeping together during the movie, but have since broken up. This gives us some insights that I believe was perfectly clear just from watching the show.

I think that the extras justify the edition even if the clarity of Blu-Ray does not.

So let's talk about the film itself and my reaction to it.

The title Chasing Amy hinges on the second key conflict of the movie.  After the script establishes that, in fact, Alyssa, a lesbian, will go straight for the right guy--the right guy being, well, Ben Affleck--the movie then torpedoes the relationship when Affleck learns that rather than him being the first guy she slept with (which she told him) she, instead, had slept with a lot of guys and, in high school, even two guys at once. When Affleck learns this, he becomes angry with her and can't get past it leading to a huge fight in a parking lot (which mirrors a real fight Kevin and Adams had) and the eventual dissolution of their relationship.

The "Amy" part comes from a story told by Silent Bob who breaks his quiet demeanor to tell Affleck about a girl named Amy who he had the same issues with and lost her, and now regrets it.  I want to start with noting that the whole "She's had multiple partners so she's a whore; but if a guy does, he is a stud" is not something I'm particularly sympathetic to. While it seems Kevin Smith 'gets this', he has the Jay character and Jason Lee -- both people with poor perspectives -- take the side of 'she is a slut', while the Silent Bob character takes the wise path of live-and-let-live. The fact that his stand-in (Affleck) suffers from it, I feel means that both he and the audience were expected to be sympathetic to it.

As I wasn't, it just made the character, and thus, the entire framework of the movie, suddenly and surprisingly less likable to me.  It also left me feeling that Kevin Smith felt he was talking to an audience of socially stunted geeks whom he expected to identify with this even while perhaps they maintained some detachment.

I had assumed from what little I knew about the movie that the "chasing" part came in when Affleck was trying to get the lesbian into his bed.  It wasn't.  Affleck literally being the guy Kevin Smith wishes he was, that part is never really in question.  I then thought the chasing part might be Affleck trying to get her back after brutally and idiotically blowing her off in the parking lot.

That wasn't it either. When he calls her, she comes right back. His idea of getting the relationship together is bizarre, and fairly asinine -- and ends their chances because she only finds it in herself to dump him when he goes well beyond the pale.  So here is where I think the "chasing" comes into play.  It seems Kevin Smith was clearly "chasing" the actress he cast. The movie was part of his plan to get her, and as a director who, even if he can only get a cult following, gives people work -- made him her boss.

Let's start with that thought -- I found that creepy even before the incredible literalness of this was made clear by the additional material.

My finding the behind-the-scenes stuff unsettling isn't where this stops though. In Alyssa, Kevin Smith creates a geek wonder-girl.  She is smart, talks dirty, draws comics, plays video games, and is really cute.  Okay, so she is a lesbian, but that is just because the right guy hasn't come along yet. This is something Joss Wheedon does effortlessly well too. See Willow for his masterpiece in this regard, who also turned out to be a lesbian.  I am not actually down on these characters as a rule, and to be fair, the vintage of the movie means it isn't copying other works – it is one of the originators.

However, my reaction to this is that despite the wistful ending, the movie plays like an idealized fantasy of what Kevin might want in a love-life.  The movie is meant to be deeply personal by reflecting the comic book in the ending that Affleck gives to Adams when he sees her at a comic con; but it also feels paradoxically inauthentic.  It made me feel like Kevin's universe was colluding to create a story that would deliver Alyssa to Holden. Kevin's FAQ notes that if you are optimistic, the movie leaves open the possibility that Holden and Alyssa get back together, while, at the same time, delivering Adams to Smith and the motivation for doing the latter hurt my appreciation of the artistry of the former. In the movie Alyssa must change her sexuality for Holden because for her to remain a lesbian would ruin Smith's chances with his actress.

The movie is clearly aware of the trope where the "right guy" can turn a lesbian straight. Alyssa's roommate even angrily mocks it in a cut scene called "The Right Man". For a writer-director to be both aware of the cliché and still use it non-ironically tells me that the integrity of Alyssa is explicitly subordinate to the greater needs of the narrative. The deleted scene would, in fact, be called 'lamp shading' it by calling attention to it.
Despite a strong cast, good performances, and excellent craft, this left me as if I never bought the movie.  It seemed a clever effort that was calculated to present a deeper heart, but it never let me forget that I was looking at a movie.  I never once felt Chasing Amy was anything real.  I suspect that if it had really said what it was feeling it would have left me clammy.
Cast:
Directed By:
MPAA Rating: R