From the very beginning it was apparent Smallville was something special. 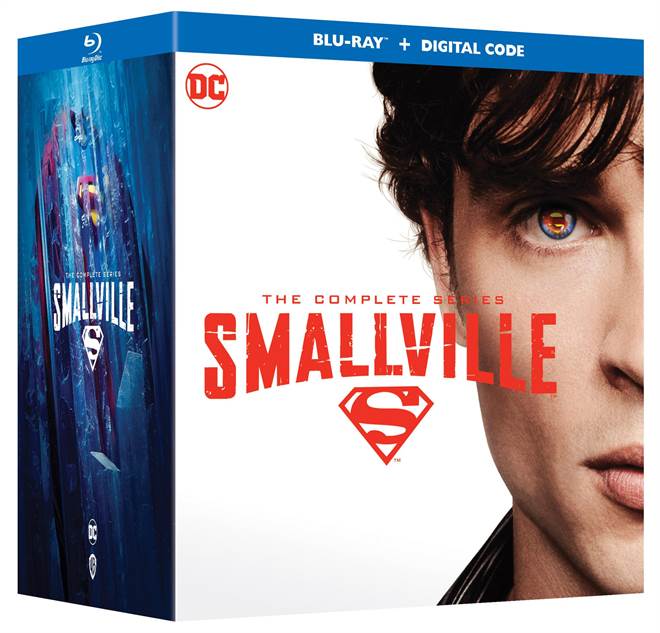 Back in the early 1930s in Ohio, high school friends Jerry Siegel and Joe Shuster created illustrated Science Fiction stories that were self-published.  By 1938, they had invented Superman, which was first published in April of that year.  Over the decades, Superman has had many adaptations in print, on television, and in movies.  From animated Saturday morning cartoons to prime-time television series, the story has been told repeatedly.  In 2001 screenwriters/producers Alfred Gough and Miles Millar (Spider-Man 2) brought a different slant to Superman by telling the story of Clark Kent discovering his powers as a teenager.  Smallville premiered on the WB/CW and aired for ten seasons.  To celebrate the twentieth anniversary of Smallville's first episode, Warner Bros. has released all ten seasons in a Blu-ray set.

From the very beginning it was apparent Smallville was something special.  The first season's Neilson ratings ranged from 5.5 million viewers to over 8 million.  Season two was even stronger with the first episode, Vortex, being watched by 8.6 million people. Viewership for the remaining eight seasons waned a little bit each year with season ten bringing in only two to three million viewers each episode. Regardless, Smallville was considered a successful series for Warner Bros.

Everyone knows the story of how Clark Kent (Tom Welling; Cheaper by the Dozen) landed on earth as a baby and was found by Jonathan (John Schneider; The Dukes of Hazard) and Martha (Annette O'Toole; 48 Hrs.) Kent, who raised him as their son.  Once Clark hit his teenage years, it became apparent that he had special powers and he needed to learn how to control them.  Throughout the series, he dated various girls, including childhood friend Lana Lang (Kristen Kreuk; Beauty and the Beast) and eventually, Lois Lane (Erica Durance; Saving Hope). He had friends Chloe Sullivan (Allison Mack; The Ant Bully), and Lex Luthor (Michael Rosenbaum; Sweet November) and battled all manner of villains and outer space entities.

Finally, twenty years since its debut, Warner Bros. is offering the entire series in one set.  Forty Blu-ray discs hold all 218 episodes plus two DVDs which house over twenty-eight hours of extras including:

The technical specifications are the standard Blu-ray 1080p video resolution and DTS-HD Master Audio 5.1 and these episodes have never looked better. The sharpness of the clothing, the detail on the actors' faces, and the depth of color make this set a must-have.  Not to be outdone, the audio is superb.  From dialog to explosions and everything in-between, the sounds are full and robust and only serve to add to the viewer's experience.

If you loved Smallville when it aired twenty years ago, then you need to add this set to your holiday wish list.  If you had only watched a few of the episodes and enjoyed them, then this set will open you up to the world that is Smallville.

Whatever your reason, you are going to want to grab this ten-season set before they run out.

For more information about Smallville visit the FlickDirect Movie Database. This release has been provided to FlickDirect for review purposes. For more reviews by Allison Rose please click here.

Chris Rebholz
Smallville has always done an excellent job capturing the spirit of the character and it still does.
Full Review | Grade: B