Murphy’s performance as Hammond, displays an actor on the verge of blooming into the most fruitful years of his career. 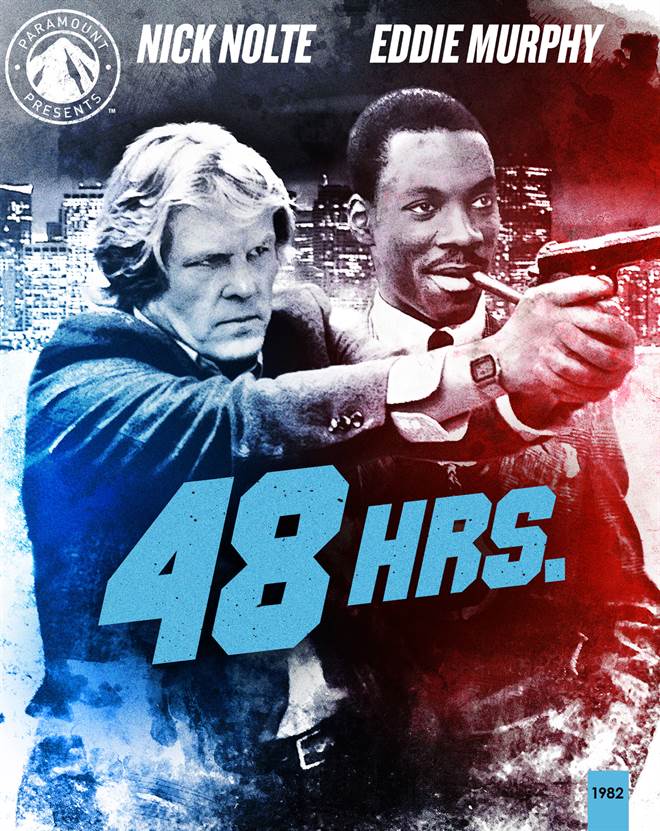 Even though technically Hammond wasn't a cop but a criminal helping with an investigation, as far as cop "buddy" comedies go, the movie helped pave the way for others to follow.  It became a classic and, of course, a sequel was filmed 8 years later.  Now, almost forty years later, as part of their ongoing series, Paramount Presents is releasing the movie in a remastered Blu-ray.

Career criminal Albert Ganz (James Remar; Dexter), is working on a road gang, when a tall, Native American, Billy Bear (Sonny Landham; Predator) drives up asking for help.  Of course, this is nothing more than a ploy to free Ganz so the two of them can go after their former associates, killing them to find the money that was hidden after their heist.  When Cates and his fellow colleagues find out where Ganz is hiding out, they go to arrest him, but Cates is the only one who survives.  To avenge his fellow detectives, Cates springs prisoner Hammond, one of Ganz associates, out of jail for 48 hours (hence the movie's title) so he can help Cates find Ganz and Billy Bear.

This was Murphy's first feature film, which jump-started his movie career.  He then spent the next ten or so years starring in one hit after another, with a couple of misses thrown in.  His chemistry with Nolte makes their on-screen banter believable and is part of what makes the movie work so well.  Remar is great as the "take no prisoners" felon but Landham portrays the stereotypical vision of a native American in the 1980's - silent, violent, and not terribly intelligent.

Though there have been previous Blu-ray releases of 48hrs., this latest version is part of a collection of films that have been restored through digital processing.  With the BD-50 disc format and the 1080p resolution, the picture quality of this film is the best I have seen.  There is some graininess throughout but that is to be expected from a movie that is almost 40 years old.  The 1.85:1 aspect ratio is original to the movie.  The Dolby TrueHD 5.1 audio is decent but doesn't match the upgraded video quality.   Gunshots sound metallic and extremely loud, whereas dialogue sits mostly upfront.  The very jazzy soundtrack is okay, and the addition of the Calypso drums adds an additional layer.

As with most of the Paramount Presents releases, the extras are disappointing.  Unlike its predecessors though, Leonard Maltin doesn't speak as to the movie and casts' merits in Filmmaker Focus.  This time it is director Walter Hill (Brewster's Millions) who reminisces and offers insights.  The only other extras are the theatrical trailer and Space Kid, a 1966 short film that is briefly seen in 48hrs.

Released from jail for two days, running around San Francisco looking for a felon and his accomplice, and stuck with a crass, rude, unapologetic police detective, Murphy's performance as Hammond displays an actor on the verge of blooming into the most fruitful years of his career.  Nolte as Cates is a perfect contrast to Hammond, and while they obviously have different styles, the two characters end up garnering mutual respect.

Paramount Presents once again brings a quality product which is obvious from the minute you start watching the movie.

Download 48 Hrs. in Digital HD/4K from the iTunes store.

Listen to the 48 Hrs. soundtrack on Apple Music.

For more information about 48 Hrs. visit the FlickDirect Movie Database. This release has been provided to FlickDirect for review purposes. For more reviews by Allison Rose please click here.