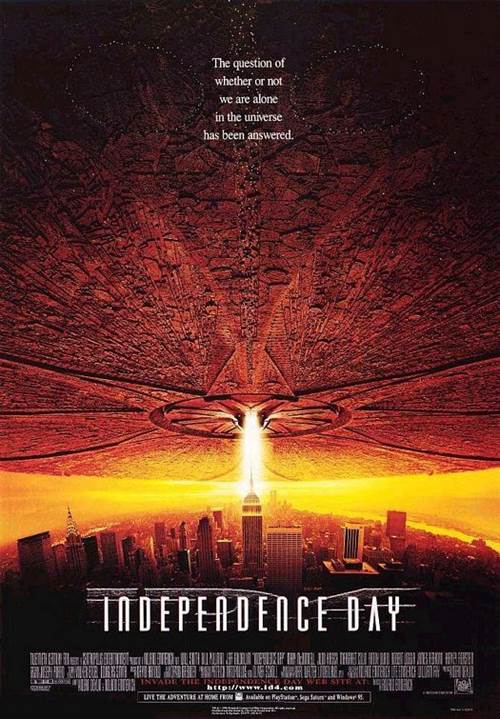 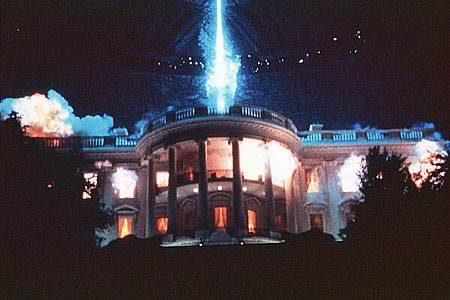 It is an ordinary summer day. But then, without warning, something very extraordinary happens. Enormous shadows fall across the land. Strange atmospheric phenomena, ominous and mesmerizing, surface around the globe. All eyes turn upward. The question of whether we're alone in the universe has finally been answered. And, in a matter of minutes, the lives of every person across the globe are forever changed. With the fate of our planet at stake, the Fourth of July is about to take on an entirely new meaning. No longer will it be an American holiday. It will be known as the day the entire world fought back. The day we did not go gentle into the good night... The day all of us on planet Earth celebrated our independence day.

Stream Independence Day in Digital HD/4K from the AppleTV store.


Independance Day Sequel In the Works  7/10/2012 11:07 AM EST
It's official. There will be an "Independence Day" sequel, and Roland Emmerich and Dean Devlin are making it happen.Devlin recently told THR in an interview, "    I can tell you that Roland and I have been working together for the first time in 11 years and we're every excited about the idea of doing it. Whether or not we can make this happen, if we can get all the pieces to come together, that's ...  More>>

Independance Day Sequels In Development  10/27/2011 5:03 PM EST
"Independence Day", the star studded blockbuster hit, will have two more films to add to its franchise, and they will be scripted back to back.In development since 2009, the film has been working on a deal with Will Smith, but the $50 million that he asked for, along with director Roland Emmerich's salary, is just too out of budget for Fox. Emmerich along with producer/writer Dean Devlin, are repo...  More>> 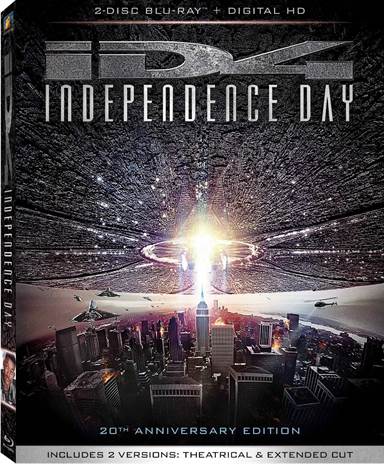 It's been 20 years since Bill Pullman (American Ultra) uttered those now famous words "Today we celebrate our independence day", and made the world fall in love with a new, timeless classic movie – Independence Day.  Now, in anticipation of this summer's sequel, Twentieth Century Fox Home Entertainment has released a special anniversary edition Blu-ray.  As the tag line states, "We've always believed we weren't alone. On July 4th, we'll wish we were."

It was a normal summer day when, suddenly, alien space crafts appeared in the sky over the major cities of the world.  Not knowing what they wanted, the world had no reason to fear them and, in fact, many individuals celebrated their arrival.  However, David Levinson (Jeff Goldblum; Jurassic Park) found patterns in the satellite signals interrupting the TV broadcasts everywhere and realized those ships were counting down.  To what, he didn't know.

Meanwhile, Captain Steven Hiller (Will Smith, Men in Black) of the Marine Corp was looking forward to a quiet Fourth of July holiday with his girlfriend, Jasmine (Vivica A. Fox; Empire), and her son. All that changed, though, when the aliens descended and he had to report back to base to find out what was going on.  He eventually ended up volunteering for a once in a lifetime assignment to save planet Earth.

For 1996, Independence Day was made with the best technology out there and was one of the last films that used actual models that were blown up to create many of the special effects.  In fact, the movie won an Oscar for special effects.  By today's CGI standards, the effects would be considered subpar and laughable, but, 20 years ago, they figuratively blew audiences away and added to the suspense and excitement of what became a summer blockbuster.

The acting is excellent and it's no wonder this film made Will Smith an even bigger start than he was previously.  Known as the comical nephew on The Fresh Prince of Bel Air, Independence Day showed a slightly more serious, adult side of Smith which opened more prestigious acting roles.  Pullman delivered his iconic speech with all the bravado one would expect from a world leader, and Goldblum and Judd Hirsch had a nice father and son chemistry.

For all its schmaltzy graphics, the film is beautifully presented in 1080p resolution that really makes the explosions fill the entire room.  The DTS-HD Master Audio 5.1 enhances the viewing experience for the audience, giving the overall feeling of an invasion and annihilation of the world come to life.

The extras are mostly from the original VHS release with a few additions, including an alternate ending, cast interviews and a featurette with scenes from the upcoming sequel.  Honestly, the most interesting part is to see how the cast has aged.

Even though the film is a completely cheesy popcorn movie, it became a huge hit and is iconic.  The sequel is going to be one of the summer's most anticipated movies, and fans of the original should get this Blu-ray and watch it to remind themselves what they loved about the original.