The Card Counter offers some excellent visuals and a unique and decent plot, but it feels as though it is moving along at a snail’s pace only to be left unsatisfied once you get to the finish line. 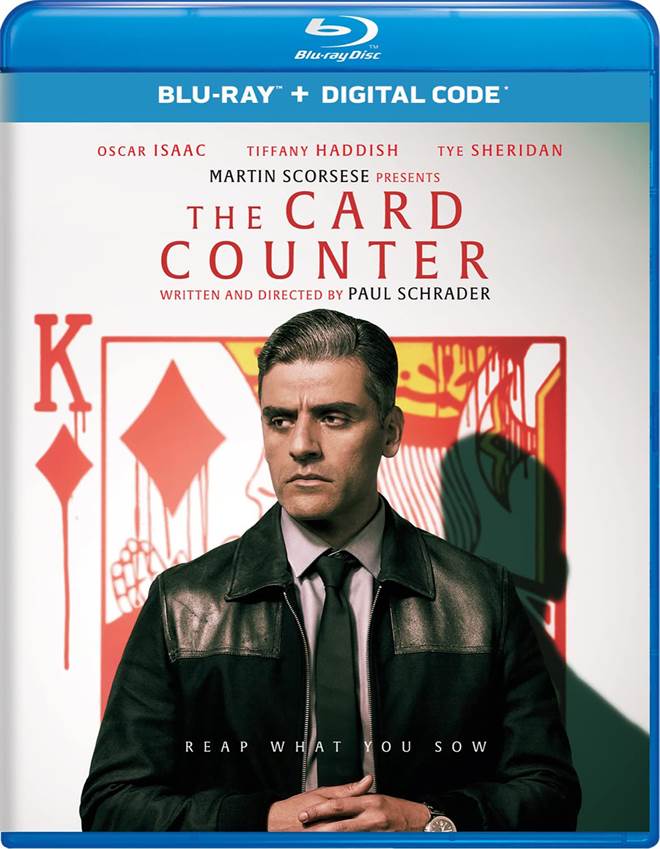 Writer/director Paul Schrader (First Reformed) has been in the film industry for over forty-five years.  From his first screenplay, The Yakuza, to his most recent movie, The Card Counter, he has been bringing his unique style of storytelling to the big screen since 1974.  Schrader tends to focus on regimented individuals who like routine, often former members of the military or law enforcement.  Unsurprisingly, William Tell (Tillich) (Oscar Isaac; Dune: Part 1) has a similar background, having been a soldier assigned to a unit specializing in torturing prisoners.  Ironically, that job landed him in jail himself, which is where he learned to count cards.

Card counting is a formula used by Blackjack players to figure out when to bet high and when to bet low/fold.  When explained it seems to come across as a word problem, so one should be good at math and formulas if they are planning to card count in a casino.  While not illegal, card counting will get a person thrown out and permanently banned from a casino and there are pit bosses and surveillance teams watching almost everyone betting in their establishment.  Tillich/Tell keeps his card counting low key, making modest bets which yield some cash but not huge amounts and keeping him off the "radar".

While in one of the casinos, Tell is approached by La Linda (Tiffany Haddish; Night School), a fellow gambler who runs a stable (a group of investors who back a player in exchange for a percentage of their winnings) and offers Tell a stake.  He refuses but after meeting Cirk (Tye Sheridan; Ready Player One), the son of one of his fellow soldiers, Tell decides to enter a poker tournament so he can win some money to give to Cirk.

The Card Counter is definitely a Schrader film as it has his trademarks all over it.  From the military background of the character to the slow and methodical camera shots sweeping over a room and zooming in on a particular item or person, the movie is easily identifiable as being Schrader's style.  Unlike some other directors who enjoy making a scene entirely too long, Schrader finds the balance between making something artistic and annoying the heck out of the audience by dragging it on too long. Schrader masters the timing on this type of shot and almost anyone can learn from him.

Oscar Isaac is incredible as the lead character.  His stoic demeanor and deliberate movements could have looked stiff but for Isaac, it is more of a ballet in which the dancer holds a pose an incredibly long time. Haddish is the new "it" girl popping up in quite a few films in one year.  Her welcoming posture and "say what you think" mentality is in direct contrast to Isaac's sense of calm and quiet.  Sheridan is decent as the young man seeking vengeance, but I wouldn't say he was a standout among this talented cast.

The movie does have a "fog" throughout and I'm sure it was deliberate as the visual matched the feel and tone of the movie.  That DTS-HD master audio 5.1 is pretty much standard and while the picture quality is sharp, I wouldn't say it is one of the best I have seen on Blu-ray.  The biggest disappointment is the extras.  There is the trailer, and a 5-minute feature called A High-Stakes World.

The Card Counter offers some excellent visuals and a unique and decent plot, but it feels as though it is moving along at a snail's pace only to be left unsatisfied once you get to the finish line.  With some strong actors and a talented cast, it is a film I would consider seeing more than once, if for no other reason than to figure out if you are able to learn how the card counting is done (almost like a magic trick) and to watch for more, intricate details behind the story and the tricks of the trade.

For more information about The Card Counter visit the FlickDirect Movie Database. This release has been provided to FlickDirect for review purposes. For more reviews by Allison Rose please click here.

The Card Counter images are © Focus Features. All Rights Reserved.