Unforgiven is a western about redemption, friendship and justice. 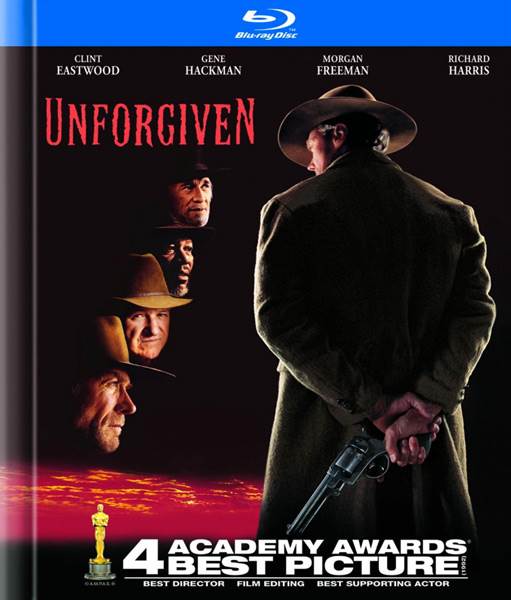 Purchase   DVD/Blu-ray/4K UHD
It's hard to believe it's been 20 years since the "modern" western masterpiece Unforgiven was released in theaters. Pausing for a moment to reflect on the timelessness of the Clint Eastwood vehicle,  a deep study of the intricate plot points which make the film so spectacular is warranted. Spoiler Alert - for the uninitiated who haven't seen the film, read no further, just go and get this blu ray to enjoy. For the nostalgic, or those with a not so fresh recollection of the film, take a trip back to a time when Eastwood returned to being Eastwood and western cinema was roaring back to the mainstream in Unforgiven:

Unforgiven is a western about redemption, friendship and justice. It takes place in the western town of Big Whiskey, ruled by sadistic sheriff Little Bill (Gene Hackman). Little Bill doesn't allow any firearms in his town, and anyone who defies this rule, will pay dearly at his hands.

But, when two cowboys start stabbing and attacking young prostitute Delilah Fitzgerald (Anna Levine) while at the town's saloon brothel, things change for the town. Her fellow prostitutes and saloon owner Skinny (Anthony James) call on the sheriff Little Bill to mete out justice for attacking Delilah, whereupon he responds by valuing Delilah's livelihood at two horses, for Skinny, to be paid by the attackers. This outrages the women prostitutes and they decide to pull together their own money to deliver capital punishment themselves, thereby dooming Big Whiskey to all the violence that follows in the film.

We then move on to our protagonists, starting with Will Munny (Clint Eastwood), a retired gunslinger, ruthless by reputation, now a widower with two children who defines himself by the standard his wife set for him while she was alive, and now by that he imagines she would set were she still able to. Not a farmer by nature, he continues to live with his children on a hog farm. But just as he only plays farmer for her, now he accepts The Schofield Kid's (Jaimz Woolvett) offer to split the $1,000 reward for the assassination of the cowboys, out of a belief that she would now wish for him to collect the reward money so as to improve life for his children.

Before departing for Big Whiskey and the falls from grace he will witness there, he fetches his best friend and old partner in crime. They both shared a lot of history and both are trying to redeem themselves for their past actions.

This western shares a story about a man seeking redemption for his very violent past, and his fight for justice and finding forgiveness. This journey will leave you not cheering for a hero, but realizing that a bad person can become good and be forgiven.

At first glance, Clint Eastwood turned down the script, and then he reread it and wanted to make the movie badly. The Blu-ray includes a booklet about the script, writer David Webb Peoples and the cast. There is a decent selection of on-disc extra features as well. It includes some interesting documentaries including the making of Unforgiven and learn more about great Clint Eastwood. For those movie fans that aren't really into westerns, I say stop and give this one a chance! The story is brutal, not for the weak of heart, but it's worth it.

Download Unforgiven in Digital HD/4K from the iTunes store.

For more information about Unforgiven visit the FlickDirect Movie Database. This release has been provided to FlickDirect for review purposes. For more reviews by Penny McLean please click here.