Full Metal Jacket Is A great film in a very good package. 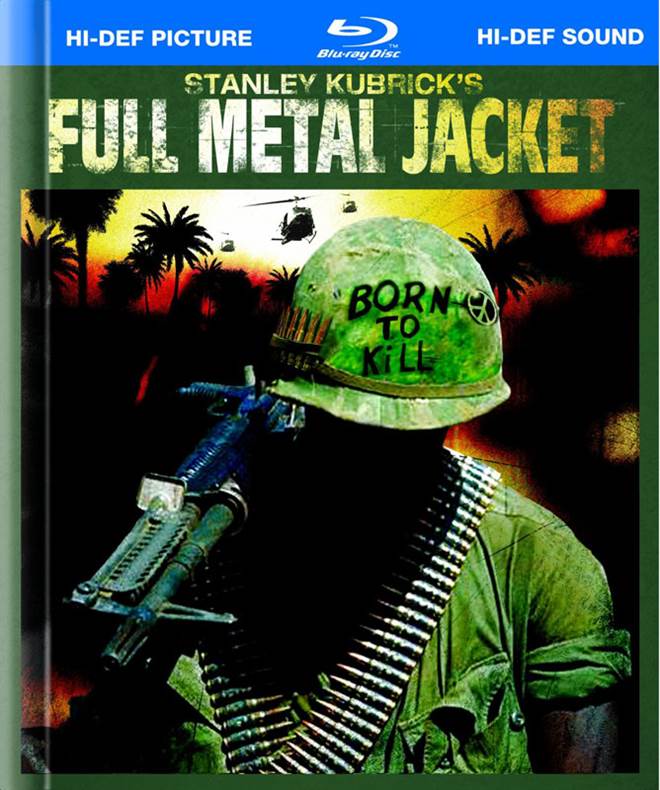 The 25th Anniversary Edition of Full Metal Jacket has been released on Blu-ray Disc and if you have never seen the movie, it's a stunner.  Packaged with a companion book, the 2-disc set makes a great purchase for your library.  Nominated for an Oscar, the gutsy war film features an excellent cast and magnificent direction by Stanley Kubrick.

The film follows new recruit Private Joker (Mathew Modine) through a brutal Marine boot camp at Paris Island with his punishing drill Sergeant Hartman (R. Lee Ermey) providing the pressure. This first half of the movie shows how Joker gets the training necessary to survive the war in Vietnam.  The film spotlights other recruits like Leonard Pyle (Vincent D'Onofrio) an overweight slow-witted guy who tries to overcome the ire of Sergeant Hartman barely getting by at the rigid training facility.  This segment of the film establishes the characters revealing their personalities.

Full Metal Jacket continues as the Marines arrive in Vietnam to start their tour of the blistering war.  Here we see the ravages of war in the jungles of Vietnam with Joker, Pyle, Eightball, Rafter Man, Animal Mother, and Cowboy trying to survive one skirmish after another. Showing that war can be a hell on Earth, the movie digs deep into the fears and courage of the men who withstand the horrors of battles under the worst of conditions.

Director Kubrick (Clockwork Orange, The Shining) puts his actors through tough terrain, unimaginable war conditions and a good measure of uncomfortable locations in order to show the realism of a vicious conflict.  No stranger to showing a lot of brutality and psychotic behavior in his films, Kubrick provides a good measure of it in Full Metal Jacket.

The special bonus features are not abundant but are of good quality.
Topping the extras is a 1-hour Documentary called "Stanley Kubrick's Boxes" which was originally aired on British Television. Here you will find filmmaker Jon Ronson looking through the contents of hundreds of boxes filled with Kubrick's personal notes and other materials that were in his possessions following his death.
A Featurette "Full Metal Jacket Between Good and Evil" runs about 30 minutes and covers the film's conception, how the cast was chosen, and other production information.
Included is commentary by Adam Baldwin, Vincent D'Onofrio, R. Lee Ermey, and Critic/Screenwriter Jay Cocks.  Comments from Ermey are fun since he's as grumpy as his character in the film. It would have been more interesting if the producers of the extras had added Mathew Modine.
A very cool 48-page book holds the 2 Blu-ray discs and features special photos, rare press materials, fascinating historical data, cast remembrances, and more.

The Sound on the Blu-ray is very good and plays very well on my television's sound system.  The crackling of gunfire and other combat sounds are very realistic and the dialogue can be easily understood.  If you really want to have some fun and your sound system will take it, ramp up the volume during one of the battles and you'll feel like you are there.

The picture presentation on my HD television is exceptionally good with fine clarity and color.  I love the fact that it fills my whole screen without the bothersome black bars on the top and bottom. Some of the dark war scenes do get a little fuzzy at times and camera movement does cause minor blur, but if you are not too picky then these two things should not bother the showing.

The film is rated R and has some off-color language, war violence, and drug use. It's a kind of film that should only be watched by adults or mature teens.

FINAL ANALYSIS: A great film in a very good package. (B)

For more information about Full Metal Jacket visit the FlickDirect Movie Database. This release has been provided to FlickDirect for review purposes. For more reviews by John Delia please click here.

Allison Rose
Kubrick had a way of making the audience become invested in the characters of his films and created some truly memorable ones.
Full Review | Grade: A