Those hoping to see a new version of the animated movie will be disappointed. This Mulan has its own feel and texture. 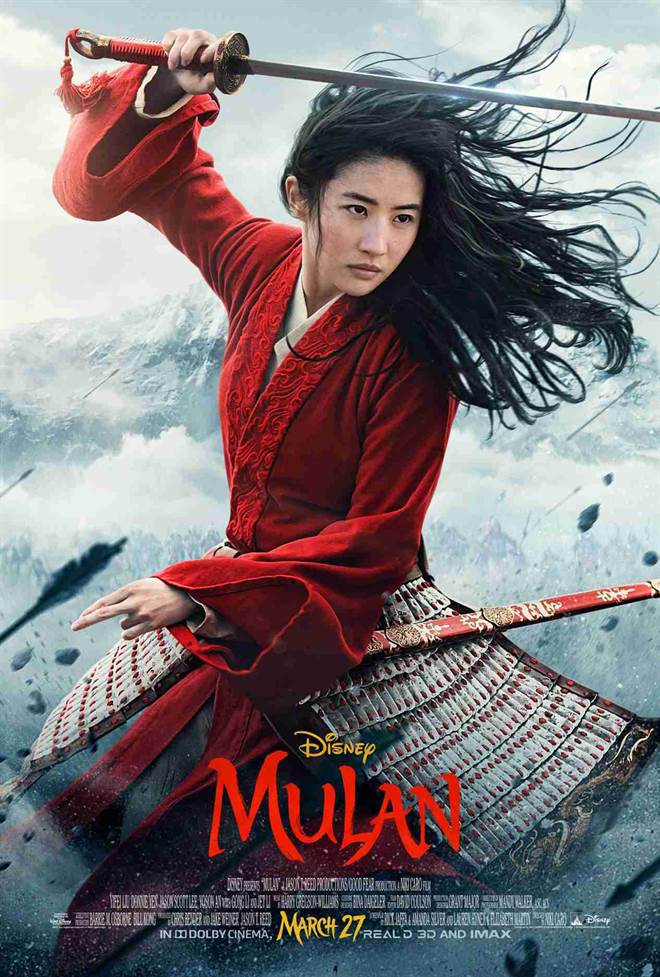 One of the most anticipated film openings of 2020 was supposed to be Disney's live-action version of their 1998 animated movie, Mulan.  Originally slated for a Spring 2020 release Mulan had a Hollywood premiere on March 9, 2020.  Unfortunately, due to the Covid-19 lockdown, the film was postponed numerous times until Disney announced Mulan would be released on their premium channel, Disney+, on September 4, 2020, for an additional fee of $29.99.  While the cartoon version had vibrant colors, a dragon mascot named Mu Shu who was comic relief, and several terrific songs, this version is darker, more serious, and is not a musical.

Mulan (Yifei Liu; The Assassins), based on Chinese folklore, tells the story of a young woman who takes her aged father's place in the Imperial Army while hiding her true identity.  If she were to be found out, she would not only bring dishonor to her family but would end up beheaded.  Over time, she becomes a proficient and skilled warrior, saving her regiment from an enemy attack.  Eventually, unable to live with her lie anymore, she confesses that she is female.  Expecting to die, she is instead let go to head home in disgrace after her fellow soldiers beg for her survival since they owe their lives to her.

As Mulan is traveling back to her family, she overhears the enemy talking about their trickery and how they plan to attack the Imperial City and kill the Emperor (Jet Li; Fearless).  Risking death, Mulan returns to her regiment to warn them.  Due to her bravery, Mulan is included in the attack and saves the Emperor from an evil witch, Xianniang (Li Gong; Memoirs of a Geisha).  Upon the enemy's defeat, Mulan is honored by the Emperor and is offered a position as a captain in the military, which Mulan declines.  Returning home, Mulan is welcomed home as a brave warrior, bringing honor to her family name.

After an exhaustive audition process, Director Niki Caro's (Whale Rider) decision to cast Liu in the title role was a smart one.  She is strong and beautiful and is currently considered to be one of the best actresses in China.  She portrays Mulan as humble, strong, conflicted, scared yet determined.  Gong, as a female antagonist with supernatural tendencies, was a wise addition to the script, pitting Mulan against another female just as often as she fights male warriors.  The men of the film - Li, Donnie Yen (Rogue One: A Star Wars Story), Jason Scott Lee (Dragon: The Bruce Lee Story), Yoson An (Dead Lucky), and Tzi Ma (The Farewell) - all support these wonderful ladies as the story unfolds.

While there are some beautiful visuals in the film there are also some not-so-great special effects, which can sometimes be distracting.  The story is mainly the same as the animated version and is well told.  Some changes include a Phoenix replacing the ancestorial dragon, Mu Shu; the presence of the witch; Mulan's exceptional fighting ability, which borders on supernatural at times; and, of course, the absence of the songs from the animated film.

Those hoping to see a new version of the animated movie will be disappointed.  This Mulan has its own feel and texture.  It is darker, more sinister, and more serious than its predecessor and is definitely not intended for younger audiences (hence its PG-13 rating). It is also enjoyable, though sometimes cheesy, a story that has followed the recent "female empowerment" trend.

With a terrific cast, good script, excellent fight choreography, and decent visuals, Mulan 2020 is a worthwhile retelling of the classic story.  However, as much as I liked the movie, I have no doubts the viewing experience would have felt different had I been able to watch it on a big screen in the theater.  Alas, maybe sometime in the future, but for now, Disney has a solid live-action movie on its hands.