HBO Max brings a little bit of humor and a “look on the bright side” of quarantine life to Locked Down. 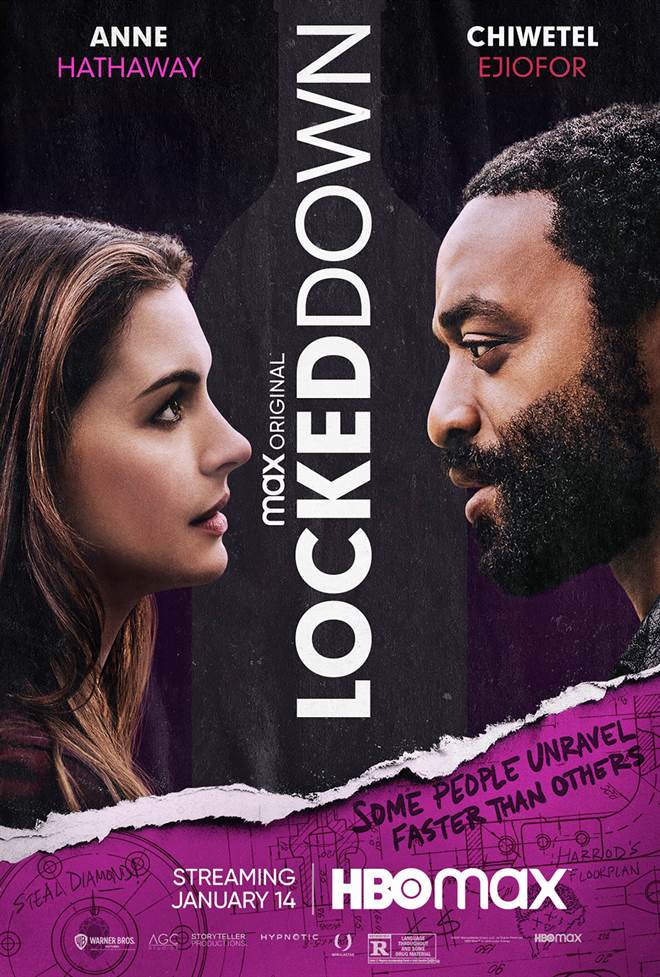 This past year has been a trying experience under the best of circumstances.  Families stuck together 24/7 for weeks at a time. It could drive anyone crazy as little quirks that were once "cute" are now a thorn in the rest of the family's side.  However, what if you were trapped in a London flat with your significant other who has decided they don't love you anymore and until the pandemic hit, was planning to move out.  For Paxton (Chiwetel Ejiofor; 12 Years A Slave), this is his new reality.  Locked Down, HBO Max's new feature film, which offers a glimpse into this new reality, premieres on January 14, 2021.

Linda (Anne Hathaway; The Devil Wears Prada) met Paxton a decade ago when they were both young and wild.  In those ten years, Linda changed into the responsible businesswoman she is today.  Meanwhile, Paxton, who is a convicted felon, drives a delivery truck and has little ambition to be anything more, or so it seems.  After telling Paxton she doesn't love him anymore, but before she can move out, the two are suddenly quarantined together and trying to make an awful situation even the slightest bit more pleasant.

Because he was in Jail, Paxton cannot deliver certain products, especially valuable jewels.  However, when his boss offers him three day's work, Paxton is willing to use a fake name in order to get past the security guards in the locations he needs to go.  When it slips that he has a pickup at Harrod's department store, Linda, who used to work at Harrod's, hatches a get-rich plan and uses Paxton as her accomplice.  As the two work as a team, having to make the last-minute decision whether or not to steal the Harris Diamond, their affection for each other is revived and rekindles their romance.

Hathaway, who channels a little bit of Miranda Priestly for this role as a shrewd businesswoman, is solid as usual.  Ejiofor, by contrast, plays Paxton as a downtrodden; gloomy individual who has no prospects in his future. The two of them together are much more interesting and entertaining when they are at odds with one another rather than when they are reunited in romance.  There is a terrific supporting cast made up of Mindy Kaling (The Office), Stephen Merchant (Fighting with My Family), Lucy Boynton (Bohemian Rhapsody), Ben Stiller (Meet the Fockers), Ben Kingsley (Iron Man 3), and Dule Hill (Psych).  Each brings something unique and a touch of humor to the film.

While the cast is wonderful, and the script is decent, there are two distinct stories being told here and their only connection is Linda and Paxton.  On the one hand, we have a simple little Rom-Com with a cute premise mixed with an Ocean's Eleven type Jewelry heist crime.  On paper (or in an elevator pitch) this may seem like a great idea but the plot losses something when the stealing of a rare jewel comes into the picture.  There are a few moments of heart-pounding thrills during the heist, but the ending left me a little unfulfilled as a ROM-COM.

HBO Max brings a little bit of humor and a "look on the bright side" of quarantine life to Locked Down and to a certain extent it works.  Maybe because we are still living through the Pandemic, it is too soon to truly appreciate the concepts of forced cohabitation and/or pulling off the perfect crime thanks to masks and isolation but one day down the road I'm almost certain I would have a different perspective of Locked Down and the predicament Linda and Paxton are in.

For more information about Locked Down visit the FlickDirect Movie Database. For more reviews by Allison Rose please click here.

Locked Down images are © HBO Max. All Rights Reserved.