On the surface, The Adam Project is simply a sci-fi thriller with a strong cast, but underneath the top layer, there are other messages about grief, deception, and bullying. 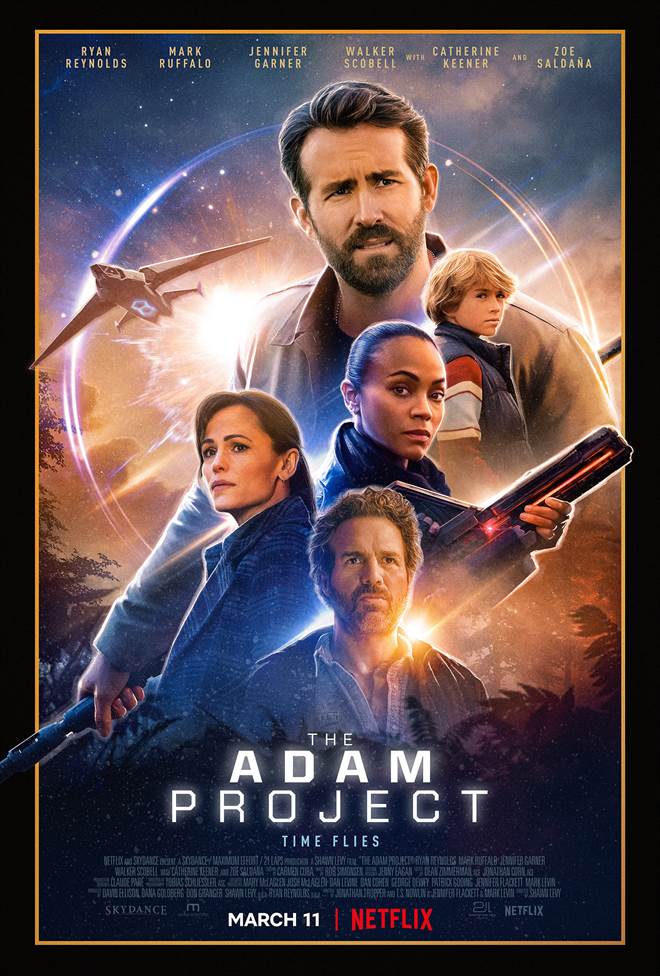 The idea of time travel has been documented as far back as ancient times.  Hindu mythology talks of King Raivata Kakudmi traveling to heaven to meet Brahma and returning to Earth several ages later.  Buddhist and Jewish teachings also suggest that religious leaders "traveled" and returned home years later to find everything and everyone had changed.

Then in 1895 author H.G. Wells created a novel called The Time Machine, describing the use of a machine to jump to different eras.  As science and technology have rapidly advanced over the last one hundred and twenty-five years, so has the theoretical concept of time travel.  It is a well-research concept and is often depicted in television shows and movies.  The latest of that variety is the Netflix original movie, The Adam Project.

Adam Reed (Ryan Reynolds; Deadpool) is a pilot who steals his fighter plane, time jumps, and crash lands in the year 2022. Injured, he tries to stay out of sight but somehow manages to run into his twelve-year-old self.  After explaining who he is and time travel to tween Adam (newcomer Walker Scobell), Adult Adam needs to find a way to fix his plane and get to 2018 to find both his wife, Laura (Zoe Saldaña; Guardians of the Galaxy) and his dad, Louis (Mark Ruffalo; Avengers: Endgame).  However, things become much more complicated when soldiers from the future come to destroy Adam.

For once, I would like to see Reynolds play a role other than the sarcastic, sometimes cocky, man-child he typically portrays on screen.  He isn't a bad actor; he just doesn't have any range.  As Adam's dad, Ruffalo has a smaller role but makes the most of it.  Saldaña is a badass and, in comparison, Adam's mom, Ellie (Jennifer Garner; Alias) is a sweet, overwhelmed widow who is doing her best just trying to hold things together.

However, the scene-stealer in the group is Scobell.  He needed to adopt all of Reynold's mannerisms, inflections, and body language to play a younger version of Adam and he did it with ease.  It's hard to believe he isn't a seasoned professional but he will be one to watch in the future.

The story can be described as a mystery, thriller mixed with sci-fi action.  The script is solid, if somewhat hokey at times and director Shawn Levy (Free Guy) keeps the pace moving so the almost two-hour film never drags.  Levy and Reynolds seem to make enjoyable movies that audiences typically want to watch so hopefully there will be more collaborations between the actor and the director in the future.

Skydance Media, Maximum Effort, and 21 Laps Entertainment (the production company responsible for the Netflix series, Stranger Things) team up to give The Adam Project the creativity and budget to make a semi- sci-fi film without embarrassingly lame visual effects.  While there are a few awkward "green screen" moments, the futuristic-looking planes and weapons are well done as to not distract the viewer from the action/plot.

On the surface, The Adam Project is simply a sci-fi thriller with a strong cast, but underneath the top layer, there are other messages about grief, deception, and bullying.  Is the movie groundbreaking offering something audiences have never seen before?  No, but it is an enjoyable movie with a little something for almost everyone, which is not a bad way to spend almost two hours.

For now, time travel is only a concept and, based on how things turned out in this movie, I think it should remain there.

The Adam Project has a limited release in theaters beginning this week and it will start streaming on Netflix this Friday, March 11, 2022.

The Adam Project images are © Netflix. All Rights Reserved.