While Dog Days revolves around the dogs and how they bring lives together, they aren’t the main focus.  The relationships between the humans are the story here. The point the movie does make though is how these pets enrich our lives. 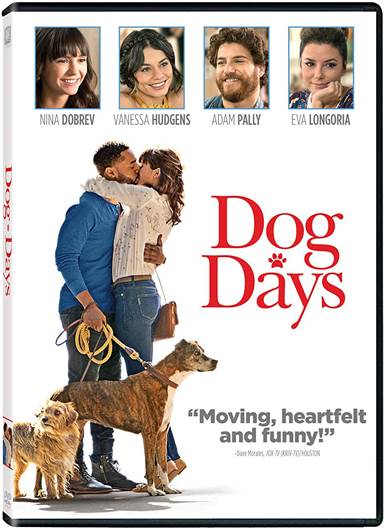 Purchase  DVD/Blu-ray/4K UHD
Are you a pet lover?  More specifically, do you love those cute, furry friends that bark in excitement every time you walk in the door? If the answer to these questions is yes then you will want to watch Dog Days over and over again. With some of the cutest faces assembled the movie is one long awwwww interspersed with some sweet and loving antidotes how these creatures bring humans together and change our lives.  If they are truly "man's best friend" then they certainly prove it in this film.  If you are a dog lover, trust me, you will want to own Dog Days.

Elizabeth (Nina Dobrev; The Vampire Diaries) is a morning talk show host who comes home to find her boyfriend cheating on her.  She then interviews former football player Jimmy (Tone Bell; The Flash) and gets into a fight with him on air.  Suddenly she finds she has a new co-host on the show – Jimmy.  However, they bond over their dogs and their relationship becomes more than friendly.

Tara (Vanessa Hudgens; Spring Breakers) is a college graduate working at a coffee shop where hot veterinarian, Dr. Mike (Michael Cassidy; Superman v Batman: Dawn of Justice) comes to get his coffee.  She drools over him from afar until one day she finds a stray dog and brings it to him.  Once he gives the dog a clean bill of health he sends it to the animal shelter run by Garrett ( Jon Bass; Baywatch) who secretly has a crush on Tara.  As Tara starts coming around the shelter to visit the dog, she and Garrett become closer and she offers to help him with a fundraiser for the shelter.

Grace ( Eva Longoria; Desperate Housewives) and Kurt (Rob Corddry; Hot Tub Time Machine) adopt Amelia (Elizabeth Phoenix Caro; The Connors) but she is shy and quiet until they find a dog and bring it home.  Meanwhile, Walter (Ron Cephas Jones; Luke Cage) is looking for Mabel, his dog who ran away which just happens to be the same one Amelia found. Finally, Dax (Adam Pally; Dirty Grandpa) ends up watching his sister's dog when she has twins.  As he devises a plan to sneak the dog in and out of his no pets allowed apartment he encounters his neighbor…Tara.

What this movie has going for it a good ensemble cast…and the humans aren't half bad either (just kidding).  Dobrev is smart and driven while hiding her soft underbelly that makes her vulnerable.  Hudgens is destined to play the young, perky girl which she does here well.  Longoria and Corddry make a believable couple and Caro is simply adorable.  Bass is the typical nerd but is endearing in a mildly annoying way.  Jones is the crusty old man who really is an old softy and you end up feeling sorry for him and Pally offers comic relief in many scenes.

The DVD also comes with a digital code and the only extra is a sneak peek of other films which frankly was disappointing.  I was hoping for a gag reel (although the end credits have some funny moments) and some cast interviews about the project and their furry costars but alas, there was none of that.  I'm sure a Blu-ray release would offer terrific details and coloring but that version isn't available at this time.

While the movie revolves around the dogs and how they bring lives together, they aren't the main focus.  The relationships between the humans are the story here and the script is written well enough to be entertaining.  The point the movie does make though is how these pets enrich our lives.

Download Dog Days in Digital HD/4K from the iTunes store.