X-Men: Days of Future Past Is A Very Decent Film, But Makes Your Mind Work. 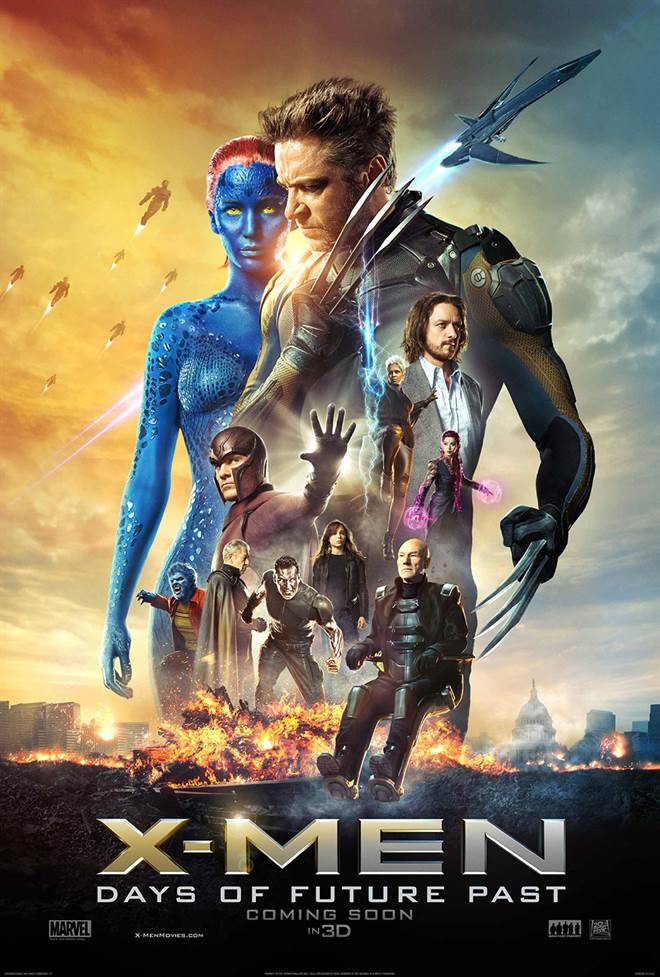 Purchase   DVD/Blu-ray/4K UHD
X-Men: Days of Future Past can best be summed up with a quote from one of my favorite movies, Total Recall (1990). "I've got to hand it to you… that's the best mindf**k yet." However, just simply stating this quote is taking the easy way out when trying to write a review of one of the most head-spinning comic book movies to date.

The movie's title and premise are taken from the 1980s X-Men comic arc "Days of Future Past" and alternate dimensions that popped up in the X-Men comics.

If you haven't seen all the X-Men movies, don't worry. The only one you really need to brush up on is Matthew Vaughn's X-Men: First Class. The movie first starts off in the year 2023 and looks like a scene out of Terminator 2; funny side note, director Bryan Singer consulted Jim Cameron on time travel for this film. We see some mutants from X-Men 1-3 as they are up against a seemingly invisible nemesis, the Sentinels.

After a little bit of action we are reintroduced the main characters of the series, Logan, Professor X, and Magneto, and unfortunately the worst cast X-Men character of them all, Storm, played by Halle Berry. It appears that they have devised a plan to go back in time and change history so the fate of mutants and humanity does not come to the end we see in this apocalyptic future.

For the rest of the film we are treated to dual scenes taking place in 2023 as well as in the early 70s as Wolverine and the other X-Men try to prevent the future that has come to pass, or at least minimize the damage in it.

After Mathew Vaughn decided to retire from the X-Men series and not make a direct sequel to X-Men: First Class, the one and only Bryan Singer (X-Men, X2: X-Men United), creator of this amazing film series, takes the reigns once again, trying to steer his mutant vision back on track after the abysmal X-Men 3 and X-Men Origins: Wolverine. Within the first five minutes, you know the true vision and world of X-Men is back. This should bring huge smiles to the faces of those who have missed that standard of quality; even John Ottoman's X2 march is also front and center, invoking a bit of nostalgia.

It appears Bryan Singer has not missed a beat, even after his giant box office failure Jack The Giant Slayer, and leads the audience to dive back into the mutant world. He superbly has the audience suspend their disbelief, while they remain able to mentally track two different time periods at once, and has it actually make sense, a trick whose only previous performances were Back to the Future and The Terminator.

The actors are once again at home in the characters they are born to play. This being Hugh Jackman's 7th time as Wolverine, it is hard to even imagine another actor playing this wildly popular character. Even with all their powers, Singer and the cast still ground the characters in reality. The action does not skip a beat; there is still plenty of humor to be found, and the set pieces are mindblowing.

That being said this X-Men film might not do as favorably as 20th Century Fox projects for the summer. Comic book fans will love it, but the general audience who just knows the X-Men by the films might have their heads set spinning, leaving them to ask: what was the point of the film? Did they really mean to do this to the series? Was 14 years of my life vested in these films for nothing? Or, they might say, hey, I loved the semi-reboot that was created here. Only time will tell.
Cast:
Directed By:
MPAA Rating: PG-13

X-Men: Days of Future Past images are © 20th Century Fox. All Rights Reserved.

Allison Rose
I have a great idea for a new drinking game. Every time you spot a difference from the original X-Men: Days of Future Past to the new Rogue cut, take a shot! With 30 more minutes of footage you will surely be drunk!
Full Review | Grade: B