Will Smith is fantastic as Omalu, transforming himself into the soft-spoken, egotistical, yet vigilant, Doctor.  His performance is excellent as he morphs into the Nigerian who simply wants to do what is right. 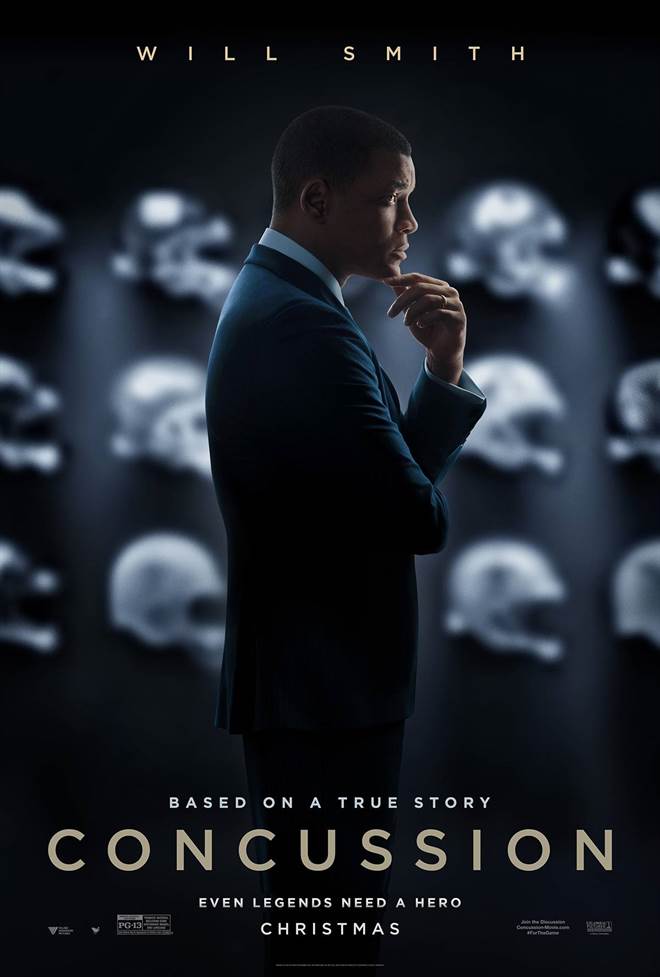 Purchase   DVD/Blu-ray/4K UHD
Professional sports is big business.  Billions of dollars a year are spent on tickets and merchandising, not to mention players' contracts.  The NFL is so big they have their own day of the week, and commercial airtime for the Super Bowl costs an exorbitant amount of money for a 30 second spot.  You can only imagine what would happen, or actually, did happen, when Dr. Bennet Omalu (will Smith; Men In Black) publicly announced that repeated blows to the head, like the ones sustained by professional football players, caused brain damage and Chronic Traumatic Encephalopathy or CTE.

Concussion based on the true story of Dr. Omalu, his research and his clash with The National Football League, hits theaters on Christmas Day.  Dr. Omalu is a Nigerian born Pathologist whose preciseness and meticulous study of a corpse annoyed most of his coworkers.  His passion for his work, however, led him to study the body and brain of Mike Webster, a former Pittsburgh Steeler running back who killed himself at 50 even though he seemed physically healthy.

What Dr. Omalu discovered was that repeated concussions caused the brain tissue to alter, leaving Football players like Webster to have violent tendencies, suicidal thoughts and mental illness.  After publishing these findings, and trying to champion the cause on behalf of the football players, he found he was on "the wrong" side of the NFL and denounced as a fraud.  Ultimately, what the NFL knew and for how long has lead to over a decade's long discussion and lawsuits by former players,

Smith is fantastic as Omalu, transforming himself into the soft-spoken, egotistical, yet vigilant, Doctor.  His performance is excellent as he morphs into the Nigerian who simply wants to do what is right.  Surrounding him is a strong cast including Albert Brooks (Finding Nemo) as his Boss, Dr. Cyril Wecht, who believes in Omalu, and Alec Baldwin (30 Rock) as Dr. Julian Bailes, a former NFL doctor who decides to join force with Omalu and take on the NFL.

Knowing the story is true only makes the film more compelling.  The movie evoked a variety of emotions for me including pity and sadness for these players, and anger at the NFL executives who ignored the data until they had it publicly shoved down their throats.

The overall feeling of the film is dreariness and despair, with a mild glimmer of hope, and Smith's performance helps bring it all to life.  The gem of the film is the cast who do a great job telling this sensitive and heartbreaking story.

There are so many terrific choices to see at the movie theater this holiday season that Concussion will probably get a little lost in the shuffle.  However, it is worth watching for the actors' portrayal of these real life individuals.