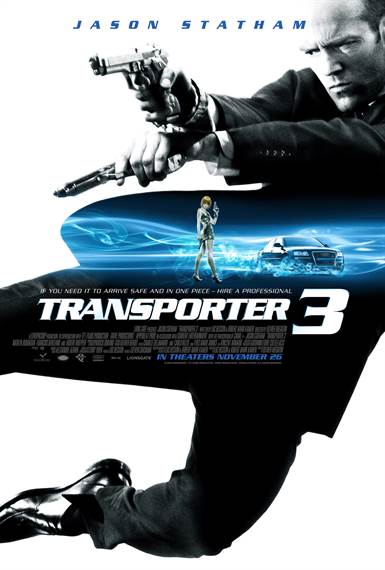 Purchase   DVD/Blu-ray/4K UHD
Although you have to judge a movie by its pedigree, there also has to be a line at which you stop. Thrillers need to at least have moderately smart plots; action needs to actually be exciting, and so on. When going up against Transporter 3, I really was not sure where to draw the "base line". I was not that impressed with the first two; and while I found them no worse than "workmanlike", I was a little bored by the second. I also found the first to be a dreadfully-missed opportunity when it segued from what looked like a really smart crime thriller to an over-the-top action palloza.

I think the baseline for Transporter 3 is the first two. Does it exceed them or not?

The Transporter series is about a guy with the generic tough-game of Frank Martin (Jason Statham), who leads a precision life as a guy who transports cargo (by car) with no questions asked. He lives by an iron clad set of rules, drives with the same ability that a brain surgeon cuts, and fights like a machine. He is an awesome, disciplined physical specimen; and he looks damn good in a suit. He also speaks with a British accent, so you know, that's extra cool!
I think my problem with the Transporter movies is that they all revolve around the fact that he actually does not really care about his rules (mainly because they would make for a dry, cold story). Unfortunately, when the rules are broken, what we get is a pretty generic action movie with a car as the centerpiece.

To be certain, it does that well. Actually, Statham's real passion is driving. Sure, he can't drive like his character can, but he finished 12th in a world championship driving competition – he is no poser. His martial arts background is also real; he does most of his own stunts and fighting. While the combat techniques are cynically calculated, to have him take his shirt off, the fights are decent. There's a little variety in the technique, and Statham makes it look good. I found the fights to be lacking in either the inventiveness of the first movie or some really signature situations; although there is, to be fair, a great moment where after almost laconically dispatching several thugs, he has to sprint to catch his suit jacket before it hits the floor!

The movie is virtually a commercial for the Audi A8 W12 that he drives in the film. Noteworthy is that it never suffers real disfiguring damage (partly due to Frank's careful driving, partly due to armor -- although he kicks the window out effortlessly). Despite this, the car chases are only "pretty good". They are fast enough -- but not especially innovative.

My main issue with the movie is with the passenger he is given: a Ukrainian girl (Natalya Rudakova), who may or may not be especially relevant to his job. However, you would think after the second movie, he would figure that out faster. I found her borderline unlikable, and the script's requirement for chemistry between them felt as if it were forced.

All in all to my mind, Transporter 3 doesn't let the series down -- it just doesn't elevate it anywhere different than the first two went. I am still waiting for a movie about the cold super-expert who has unbreakable rules and sticks to them.

Download Transporter 3 in Digital HD/4K from the iTunes store.