Director Todd Phillips graduates from schtick comedy to more serious subject matter with this film but still manages to interject moments of “slapstick” that remind you of his previous success. 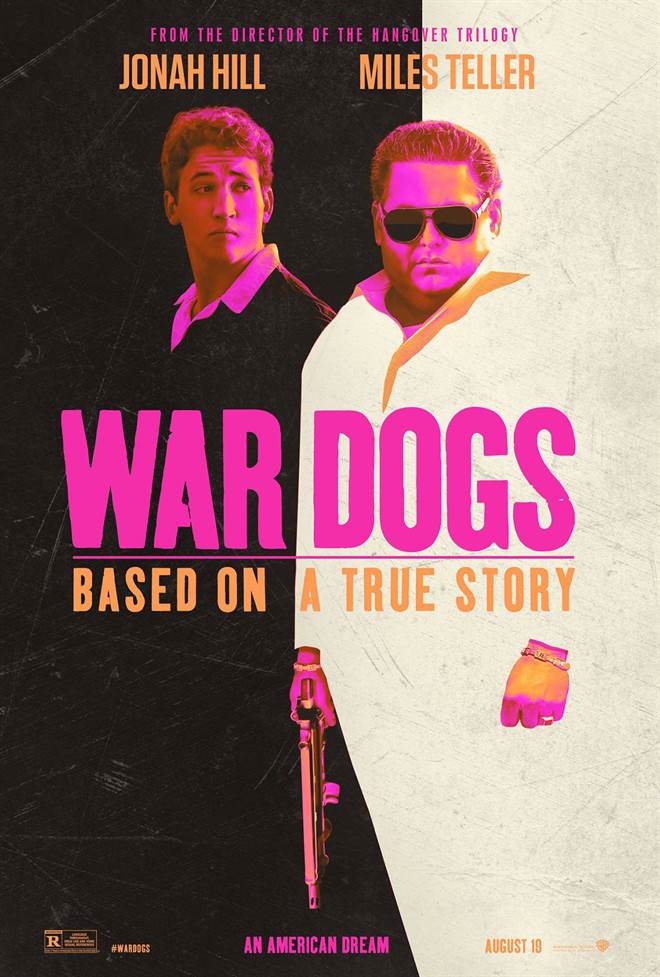 Purchase   DVD/Blu-ray/4K UHD
If you look up the definition of a war dog in the Urban Dictionary, you find, "A political and/or military person who's immorally eager to encourage a people or nation to go to war."  For arms dealers, this is exactly what they are hoping for and when President Bush went to war in Iraq and Afghanistan, they couldn't wait to supply the ammunition.  There were contracts aplenty to be had and billions to be made.

Two entrepreneurial young men, Ephraim Diveroli (Jonah Hill; Superbad) and David Packouz (Miles Teller; Divergent), decided to cash in on the war and became arms dealers.  At first, the grade school friends won small time contracts that the bigger corporations didn't bother to touch. However, growing more confident, they bid on larger contracts and eventually won a huge one that was not only way over their heads, but that angered their competitors.

From the beginning, the job was fraught with issues, and David had to go to Albania to oversee the shipment of 100,000 rounds of ammunition.  While there, he discovered the ammunition they had bought was of Chinese origin and it was illegal to sell to the US military.  Instead of backing out, the young men decided to repackage the defective goods and ship it anyway.  However, when Ephraim got greedy and tried to cut out David, he walked away from the deal, and their company, which, ultimately, led to its downfall and their arrests.

Based on a true story as chronicled in a Rolling Stone article entitled Arms and the Dudes, War Dogs exaggerates the details of what was described by the House Committee on Oversight and Government Reform as "a case study in what is wrong with the procurement process".  The movie wades through the process of looking for, and obtaining, military contracts and the pitfalls and windfalls of these deals.

Director Todd Phillips (The Hangover) graduates from schtick comedy to more serious subject matter with this film but still manages to interject moments of "slapstick" that remind you of his previous success.  He also utilizes the same filming style that is reminiscent of The Hangover trilogy, which seems to be uniquely his own.  With a different director, War Dogs would have, perhaps, had a little more serious feel to it, but would not have necessarily been better.

Hill and Teller have decent chemistry but don't completely feel like the best of childhood friends.  Hill's Diveroli is so obnoxious and annoying that he seems over-dramatized and practically unrealistic.  On more than one occasion, I wanted to jump into the screen and slap him, simply to shut him up and knock him down a peg.  Teller is better, but, since I'm not overly fond of him in general, he probably wouldn't have been my first choice.

With the potential to be a commentary on the Iraq/Afghanistan war, and arms dealing, this movie misses one of a few marks.  It doesn't necessarily stand for anything and it worms its way through a story that seemed as though it had too many elements at times.  Categorized as a Comedy/Drama (which is a contradiction unto itself), War Dogs has very few funny moments and no memorable ones to speak of.

I had hoped this film would be more interesting than it turned out to be and was a little bit of a letdown.  The cast didn't gel and Phillips doesn't steer his vehicle in exactly the right direction.  The subject is interesting enough, and the original article it is based on seemed rich with material, but the screenplay didn't engage me a great deal.

There are so many movie options right now that I think War Dogs is going to get lost in the shuffle and not do well at the box office.

Jennifer Broderick
The story flows, the actors, for this genre, are absolutely remarkable, and when the movie ends one wonders why it was so short.
Full Review | Grade: A