Then, there are the action scenes.  Intense.  At times, gruesomely violent almost to the point of caricature, but Timur Bekmambetov pulls back just in time. 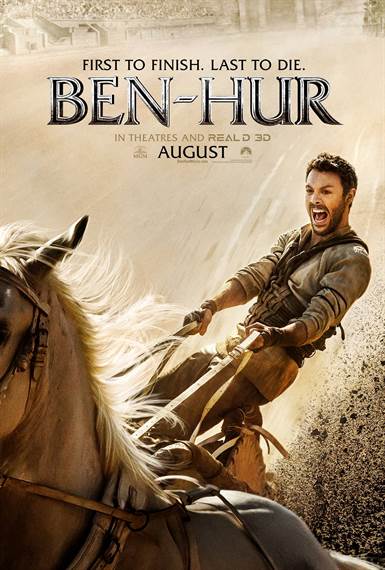 Purchase   DVD/Blu-ray/4K UHD
A quick recap for the rock valley dwellers out there...Ben-Hur is a cinematic soap opera spinning betrayal, prejudice and forgiveness; in which a prince, Judah Ben-Hur (Jack Huston), is forced into slavery after his adopted brother Messala (Toby Kebbell) falsely accuses him of treason.  Fans of the "original" Charlton Heston Ben-Hur are (un)justifiably in a tizzy as the "original" stands alone in cinematic history.

Well, folks, hate to "pop, pop, pop" away, but first off, the Charlton Heston version was inspired by the silent film that came almost 40 years before it.  That film was, itself, a take on a novel that came another forty-somewhat years before that.  What's more, this film, while quite different than the "cultural phenomenon" that was the 1959 film, is undoubtedly an epic story in its own right.  Tuchus smooching aside, it does (just as the "original") have its fair share of faults and inconsistencies.

2016 Ben-Hur  is a "re-imagining" brought to us by Christian propaganda team Mark Burnett and Roma Downey (I always want to add the Jr.!  It just flows.), along with Keith Clarke, John Ridley and Jason F. Brown; and, Paramount & MGM...likely neglecting to mention a few others.  Directed by Timur Bekmambetov (Wanted; Night Watch), this film is cinematic and cinematographic beauty.  The action is intense and engaging.  Similar to 1959's Ben-Hur, this is Hollywood in all its glory...beautiful people, in beautiful costume.  However, 2016's Ben-Hur transcends this stereotype with a heavy dose of extremely talented artists evoking a range of emotions...anger, sadness, excitement, for starters…  Then, there's the circumspect about today's political and cultural upheaval which we see parallelled greatly in this version.  Seen (by me) as a departure from both the original film, and my original perception of this just being another "Burnett/Downey Christian flick."  It truly goes beyond.

Hollywood royal descendant Jack Huston (grandson of John; nephew of Anjelica) fulfills his genetic duties on screen.  He brings Judah Ben-Hur to life with a sincerity and depth as I've seen him do with other characters before.  In spite of a spectacular performance, he is betrayed by his appearance.  I do hate to make it sound as an insult (and, to use the word hate), but he is far too flawless to be fully seen as Judah the slave…  I recently had the opportunity to meet Jack Huston, and Rodrigo Santoro (...watch the interview here on Flick Direct...be sure to like and share...shameless plug over).  They are both flawless; more so in person than on screen or in photos.  Seriously... smooth skin...faces, hands...perfectly manicured in person as, clearly, in the film.  It is evident that they have not suffered harsh conditions or manual labor that might have aged them or, at least, roughened their appearance.  There is no way these men endured what we are to believe.  Yet, each of their performances is, otherwise, without reproach.

Speaking of manicures...there's Vetruvius.  I mean Ilderim (Morgan Freeman).  Usually a fan of his performances, I found his to be one of the very few unconvincing portrayals in this film.  His energy and speech did not seem that of a Sheik traversing the desert.  This performance was just not up to par.  I felt that he phoned this one in folks.  In fact, his voice, tone, and appearance were so highly reminiscent of one godly little Lego that I would venture to say it was more of an answering machine recording that he sent in.  ...and the manicure!  For goodness sake!  The man's hands are perfectly clean, smooth and MANICURED!  Come on Timur...don't go with extreme close ups of them!

Then, there are the action scenes.  Intense.  At times, gruesomely violent almost to the point of caricature, but Timur Bekmambetov pulls back just in time.  Cut to Jack Huston.  Fine...I have a slight crush, but the man can seriously handle his horses!  No joke.  This is where the privilege of his upbringing comes of great benefit (Marquesses and Marchionesses of Cholmondeley on his mom's side).  He's had extensive experience with horses throughout his life; although, not the kind he would need for his role as Ben-Hur.  Granted his previous experience gave him a big nudge in the right direction, but he had to go through some intense training for some even more intense scenes.  Jack Huston and Toby Kebbell (Messala) had to handle multiple horses at once while riding a chariot.  What's more, they had to do this while shooting scenes with several other chariot riders handling a multitude of horses.  All while they were knocking into each other and falling off.  It could not have been easy, but they did make it look fairly effortless...considering.

To all the die hard fans of the "original," the curious, and the neophytes, the film is worth a watch.  Chinks aside, the performances rise far above any faults the production might have,  The story effectively goes far beyond where the 1959 Ben-Hur ever dreamed of going.  It stands on its own, but the political, social and emotional parallels to our current culture and society are evident; and, poignantly displayed.  There is so much profound dialogue; quotes and questions that leave the viewer pondering far more than manicures and flawlessly bronzed skin.

Download Ben-Hur in Digital HD/4K from the iTunes store.