Morgan Freeman as Ilderim commands respect and plays his role with an almost regal stature. 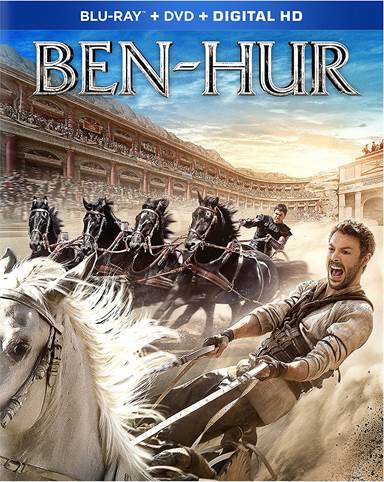 Purchase   DVD/Blu-ray/4K UHD
Ben-Hur – the title alone conjures up images of excellence in literature and filmmaking.  In 1880, the novel was published with modest success originally but became more popular when it was recommended reading by Clergy.  Then, in 1925, it was made into a silent film and also became successful.  In 1959, it was once again reimagined into a major motion picture, which became hugely successful, and which won 11 Academy Awards – unprecedented for its time.  This year, Paramount Pictures launched an updated version that will be out on Blu-ray and DVD this week.

For those of a younger generation who are unfamiliar with the story, Ben-Hur tells the tale of Judah Ben-Hur (Jack Huston; Boardwalk Empire) and his adoptive brother, Messala Severus (Toby Kebbell; Fantastic Four), who becomes a warrior for the Roman Empire.  When Judah and his family are thought to be zealot sympathizers, they are taken into slavery despite begging Messala for help.  With a side note of the preachings of love and forgiveness from Jesus of Nazareth (Rodrigo Santoro; The 33), the movie tries to reiterate the age old adage that war isn't the answer and the only way to find peace inside oneself is through forgiveness.

While it will, inevitably, be compared to William Wyler's (Funny Girl) masterpiece, it is unfair to do so.  The Wyler version had big box office draw actors that propelled it to another level.  It was celebrated and praised and will go down in cinematic history as an iconic film.  Director Timur Bekmambetov (Wanted) was up against insurmountable odds and was destined to fall short, no matter how hard he tried.  He was in a no-win situation but did the best he could.  So, when watching the film, one needs to take the 1959 version out of the equation and review this year's movie on it's own merits.

One of the brighter spots of the film is the cast.  Most notable is Morgan Freeman (The Shawshank Redemption) as Ilderim.  The seasoned actor commands respect with a simple look and plays this role with almost regal stature.  The audience sits up and takes notice as he delivers his lines and he is certainly an enjoyable part of the film.  Huston and Kebbell hold their own but don't have the same on-screen presence as Freeman.  Santoro is fine as the pacifist but we see too little of him to make a significant difference.  Of the ladies in the movie, the strongest performance is from Nazanin Boniadi (How I Met Your Mother) as Judah's wife, Esther.

The Blu-ray is one place where the latest film exceeds its predecessor.  The 1080p High Definition video is sharp and clean with a vibrant range of hues.  The special effects are well done and other than one or two spots during the chariot race, there is a seamlessness to the movie.  The DTS-HD 7.1 Master Audio is very well done and the mix and surround sound are well balanced.

The disc comes with a number of extras that are enjoyable to watch in and of themselves.  These include:

There are also deleted and extended scenes and a 3-and-a-half-minute vignette showcasing some music videos.

Let's face it, Ben-Hur is a classic piece of film that probably never should be redone.  However, while stating that, I can see why Paramount and the filmmakers wanted to bring the story, and the ultimate message of peace, love, and forgiveness, to today's youth.

With a good cast, some action sequences and some updated touches, they may well succeed in the long run.  As a Blu-ray set, the video and audio qualities are certainly top notch and the extras are interesting enough.

Download Ben-Hur in Digital HD/4K from the iTunes store.

For more information about Ben-Hur visit the FlickDirect Movie Database.